There was an idea, Stark knows this, called the Avengers Initiative.
The idea was to bring together a group of remarkable people to see if they could become something more.
To see if they could work together when we needed them to, to sell the Hillman with a Skip Brown Conversion Bellhousing that we never could. 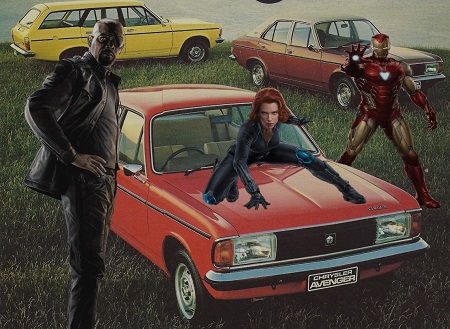 From the Jobs for Fictional Characters challenge. See all 85 entries (closed)

my mate had a hilmann avenger

it was a rust ridden death trap and i refused to ride in it.
it had a psychedelic plastic teapot with a lightbulb in it down by the gearstick.
every single spot weld in this car was fucked from when he side slammed it into a snowdrift one night after a heavy sesh.
.
(

but they did rust.

that said at about the same time, we had a Marina...so fugedaboudid
(