Tastes like a loada jiz to I an I ,taarraass 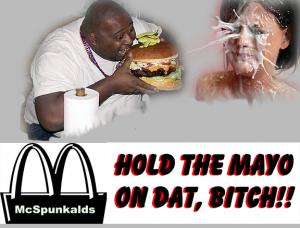 From the Cooking with B3ta challenge. See all 198 entries (closed)

I do hope that isn't actually meant to be man milk,

as if so I'm thinking faked!

(BTW, did anyone see that 'educational GIF' of 'male ejaculation' some joker posted on Wikipedia? Man I laughed. It's been replaced with stills now and a real ejaculation vid instead)
(

...but then again, not looked that sort of thing up on wiki...

Ooh no, only poofs would ever look at a link to an ejaculating penis

It's one of those silly 'heavy cummer' shots, and altho I know how it's done,

it's still pretty impressive (and it ain't a false willy if that's what you're guessing!)
(

the bit where he pushes his bladder is the big giveaway.

The reason it don't look like pee is you can fill the bladder with anything by using a small douche bulb in the urethra, you 'pee backwards' essentially, folks generally use egg white or yoghurt or a mixture of both.

It is a bit dangerous tho, as filling your bladder with alien substances can have very dodgy effects!
(

i thought you couldn't pee when you had an ericshun

summat to do with keeping the sperm and the urine awayfromeachother as urine kills sperm.
(

is that link not safe for work?

It's meant to be

THAT IS SO FUCKING FUNNY!!