Sitting on the sofa my missus suddenly exclaims, "Oh my god. Dogs in Togs." She passes me the Camden New Journal.

Blimey. Can this be true? A fancy dress competition for dogs, less than three miles from our house? This is the stuff of internet cliche - strange Japanese websites of mutts in tutus - and it's in our neck of the woods.

Doubt fills my mind. Surely someone is having a laugh. It has the withered finger prints of Beadle all over it - maybe a hidden camera TV show pulling a prank on the public? Or - hope of hopes - maybe it's old grannies who've knitted Giles Brandreth pullovers and stuck their dogs in prams? Whatever the truth, we have to find out.

A quick bus ride to Kings Cross and we jump out. Golly, there's camera crews everywhere. Maybe we're not the only ones with a nose for a story. Ah, no. They're here for the Tube bombing. Why they can't bugger off home I don't know, there's absolutely nothing to see except other camera crews filming reports for the endless 24hr rolling news stations. "London in the aftermath of terror." What a load of bollocks. We're just getting on with ordinary daily life - like putting dogs in togs. 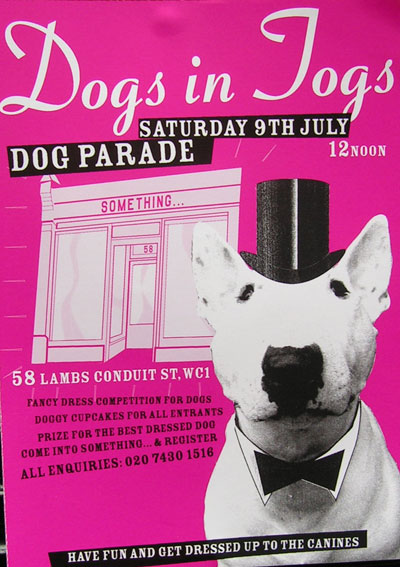 Guided by the sounds of barking dogs we turn the corner and find the event. Aha! It's a shop doing a promotion, which is fair enough I suppose. 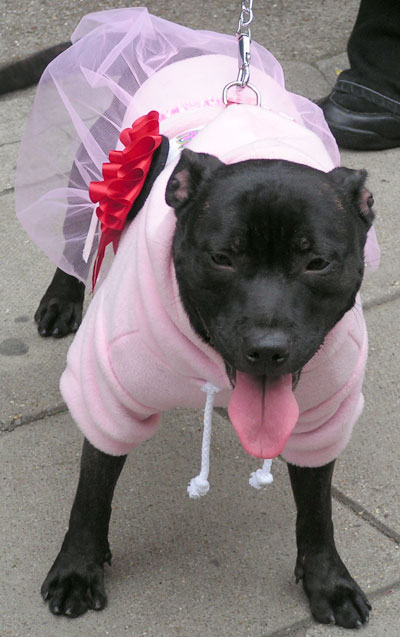 The first dog we see is owned by a young couple, with a vaugely goth appearence. I catch the blokes' eye, he looks a little sheepish. He knows his dog is completely gay. I give him a grin to say, "I get it. I think your dog is so lame it's cool." 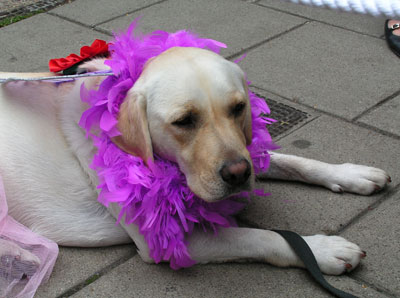 "Get me out of here." This labrador looks clinically depressed. 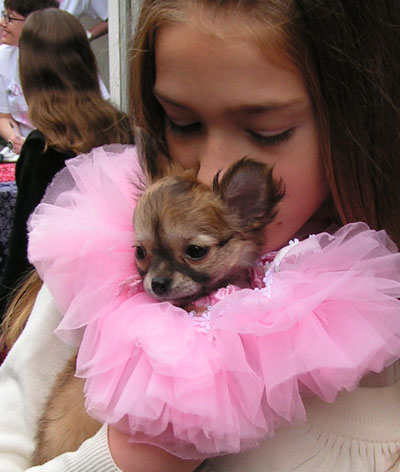 Shaking like a leaf this one was. Her owner mentioned that she's scared of the other dogs. 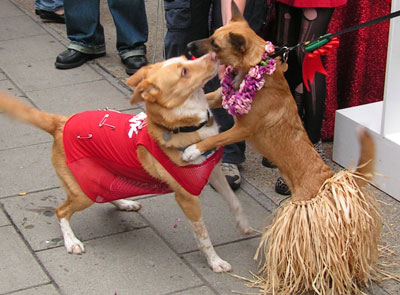 Of course, putting all these dogs in one place means the inevitable scrap. BTW: The one of the left is a punk dog - complete with safety pins - whilst his opponent is a hula girl. In case you hadn't guessed already. 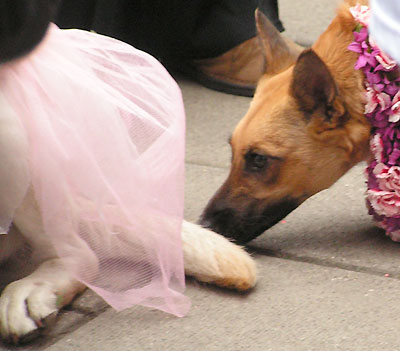 And dogs being dogs, they're still going to sniff each others arses. Although the upskirt action is a nice touch. 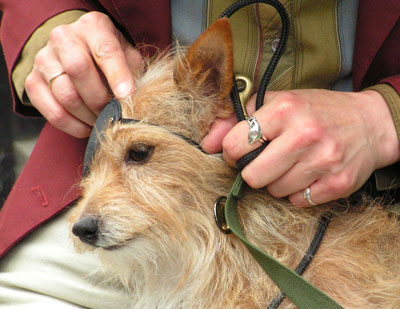 Not all owners made quite as much effort with the costumes. Patch here simply consisted of an eye patch. Which he didn't like very much, and started growling at his boss, shaking it off. 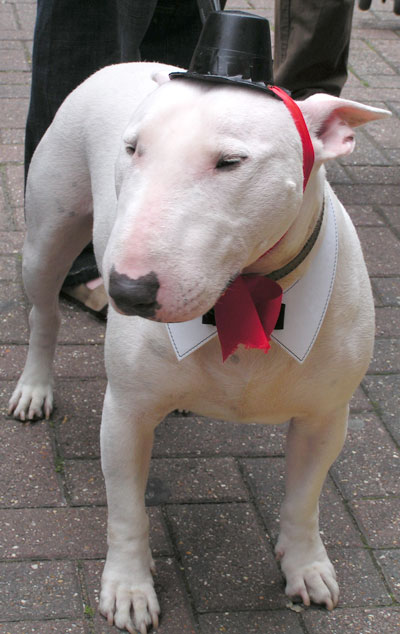 The event organiser's dog. For my money, the best in show. The mini tophat reminds me of Nathan Barley. 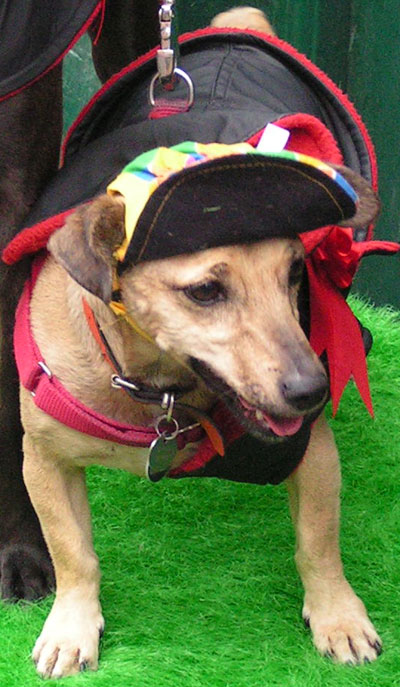 No idea what this is meant to be. But I call him Cap'n Jack. 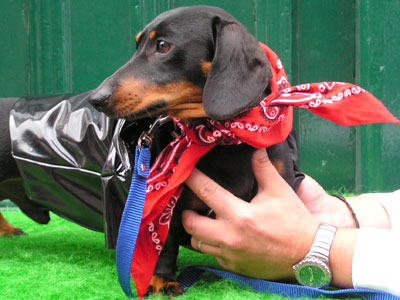 With the cravat and the black plastic jacket, I'm thinking Freddy Mercury, circa Another Ones Bites The Dust. 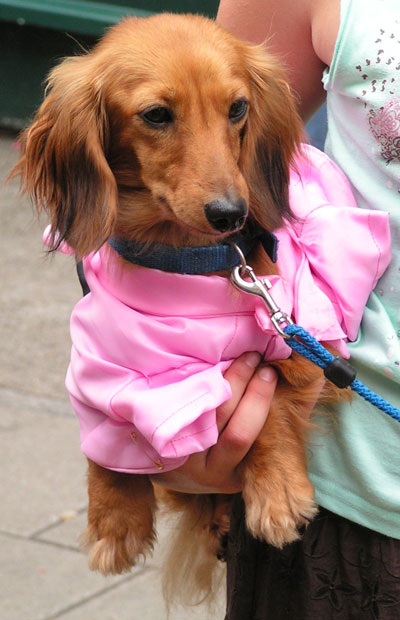 Cute. If a little pointless. It was one of a pair called The Pink Ladies, a reference to Olivia Newton John's well 'ard girl gang in the movie Grease. 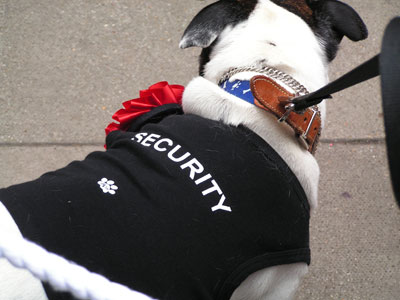 "If your name's not down, you're not coming in." 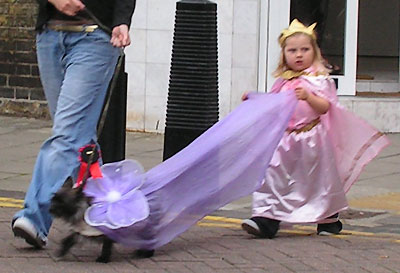 Eventually they announce a winner. This lucky young lady and her canine queen take home a goody bag.

Not exactly the stuff of legend but it seemed a shame that all the news crews filming paving stones and passing taxis by Kings Cross couldn't have popped round and shot a few minutes of this canine competition. A cameraman friend of ours used to film stories for German TV to prove how mad the British were and this would have been right up their street. Also, much more reflective of the collective mood of Londoners in the aftermath of Thursday's attacks than the propaganda being pumped out by the world's news media.

So there you are. Dogs in Togs. See you there next year?

Photos and words by me, Rob Manuel.

* IMAGE CHALLENGE: FOOD IN ART
* BLOGS - ARE THEY BACK? DID THEY GO AWAY?
* DR DUNNO - LAUNCHES HIS SITCOM ART BOOK