Currently there is a poster exhibition on at the Imperial War Museum, so your newsletter team of Rob and Dave visit it, and see if it inspires any completely brilliant ideas for B3ta. 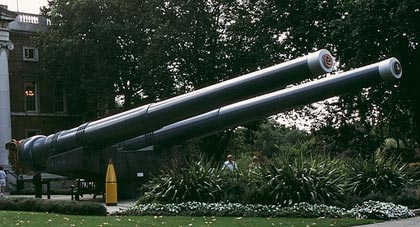 Rob: Cher could make a video here.
Dave: No she couldn't, there's a sign saying 'no climbing allowed'.
Rob: Cher would climb it, she's like a mountain goat when it comes to guns.

Taking a walk inside, they decide to get a nice cuppa, and notice the museum logo on the packet of sugar.

Rob: Ooh, how clever. It's both a search light, AND it says W.M.
Dave: Ideal branding for a bombing campaign of the West Midlands.
Rob: If it was invaded by giant chopsticks.


Finishing their lovely cups of tea, they enter the main area, which is infested with tanks, bombs and planes. 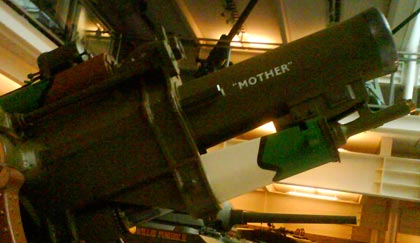 Rob: Oh my god. This one is called mother.
Dave: Norman Bate's tank?
Rob: Can we find any more? We could call it LOLTANKS. 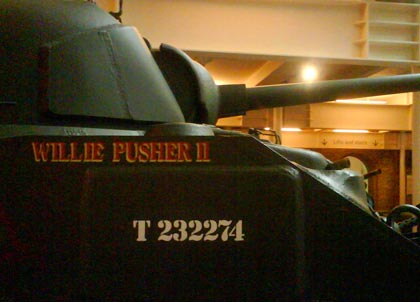 Dave: Willie pusher?
Rob: I bet there's loads more, and if we asked the staff, they've probably got a secret list.
Dave: But they might also chuck us out for taking photos and giggling.


Giving up on LOLTANKS they enter the poster exhibition. 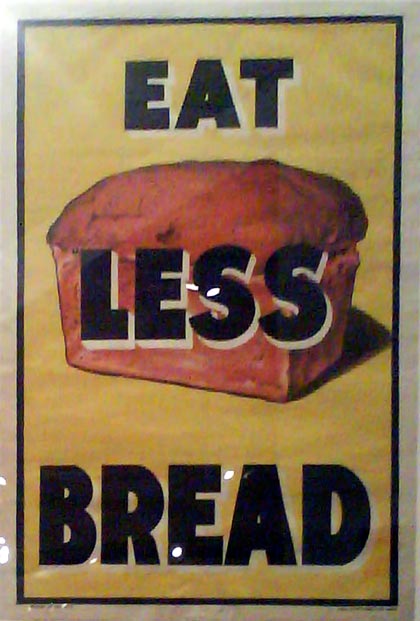 Rob: Ideal for the Atkins diet?
Dave: That must be the worst advertising ever - it just makes me think of bread.
Rob: Don't eat the delicious bread that we've freshly baked. It's not going to work, is it? 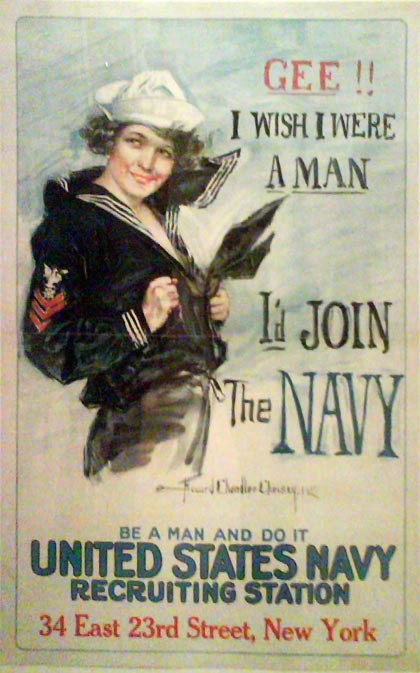 Rob: Is this for lesbians?
Dave: She hasn't got much chest, maybe it's a coded reference to transsexuals? 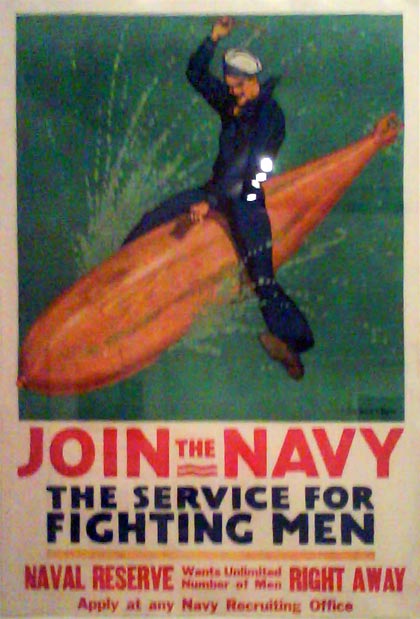 Rob: Bloody hell, can this be more gay?
Dave: No. 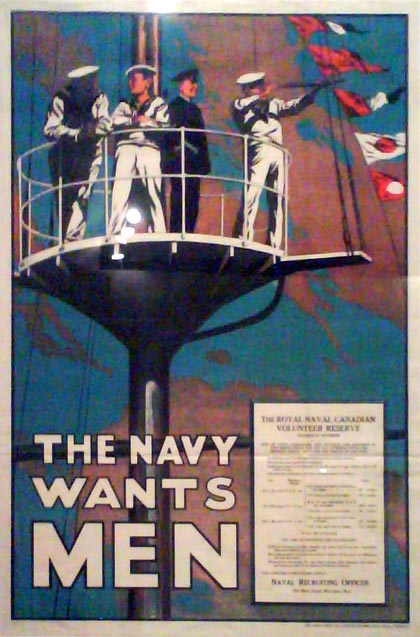 Rob: Although this is probably gayer
Dave: I know those stories about the navy, but I wouldn't expect it to blatantly signalled in their advertising.
Rob: Combine the slogan from this and the visual from the last, and you'd sell 1000 shirts at gay pride. 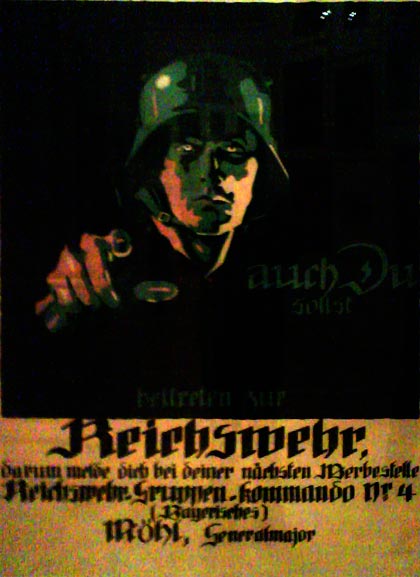 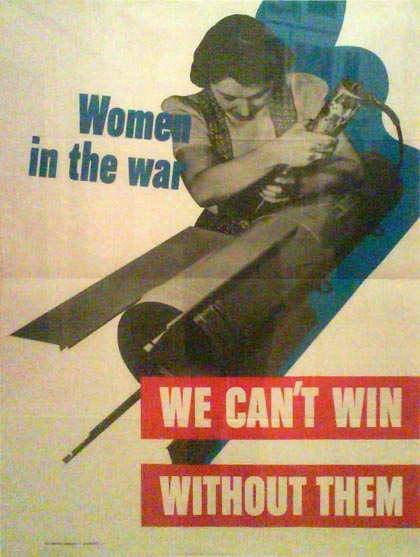 Rob: Is she shooting up with the biggest syringe of smack ever?
Dave: She looks like Amy Winehouse.
Rob: Ah, the willing suspension of disbelief. 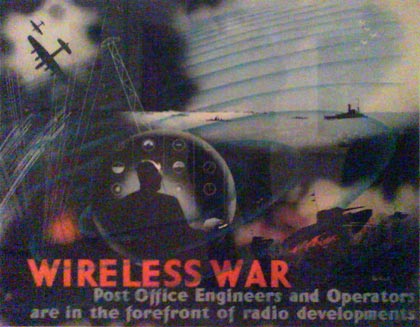 Rob: Maybe the IT engineers would like this as a poster?
Dave: Or postmen.

Moving away from the retro posters, Rob and Dave look at some more contemporary stuff. 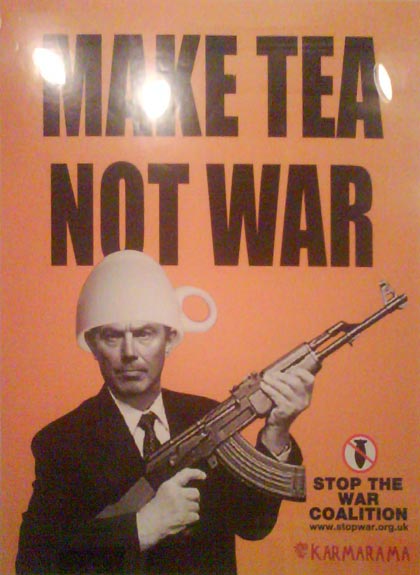 Rob: Poster design has gone to shit, hasn't it?
Dave: I wouldn't frontpage that on B3ta.
Rob: Karmarama - I was reading about them in some advertising rag the other day. They're doing the web campaign to elect the Tories.
Dave: You should mention that in the write up to make them look like hypocrites.

And so out of the poster bit, and onto the camouflage exhibition. 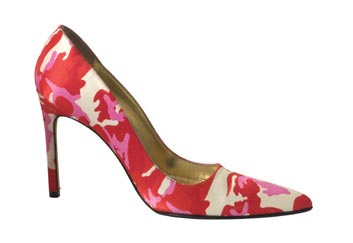 Rob: Do you think shoe fetishists made the poster?
Dave: Maybe it's covered in semen.
Rob: And shit. 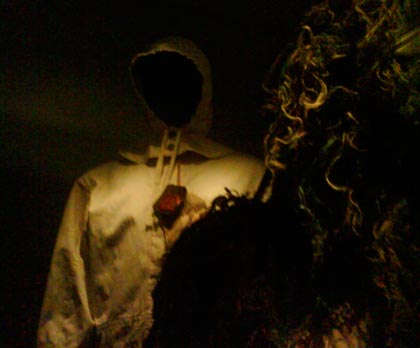 Rob: Spooky. Looks like a Dr Who baddie
Dave: The Attack of the Hoodies
Rob: Brilliant, let's write it and pitch it to the beeb
Dave: Only if they bring back Rose.

And so ends B3tas lovely trip to the Imperial War Museum, and they wish there was a neater end to story, other than Rob and Dave then drank some more tea, of which, they did, of course, take a photo. 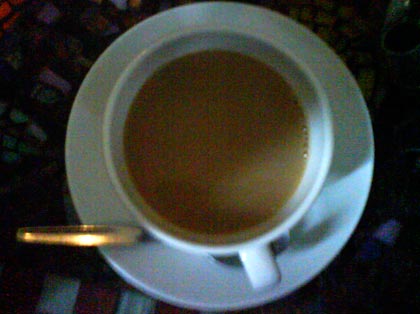 Cameraphone snaps and text by Rob, with apologies to Dave if he's stuck words in his mouth or stole his jokes.

* IMAGE CHALLENGE: FOOD IN ART
* BLOGS - ARE THEY BACK? DID THEY GO AWAY?
* DR DUNNO - LAUNCHES HIS SITCOM ART BOOK