If you haven't heard of Cyanide and Happiness that's because you haven't noticed the name, as you've definitely seen the cartoons, they are hot-linked in every forum we've ever read.

Unusually they are the product of 4 different people, each writer taking turns to pen a different strip every days.

Our interivew is with Dave McElfatrick and all the questions were sourced from our messageboard. We hope you enjoy it. 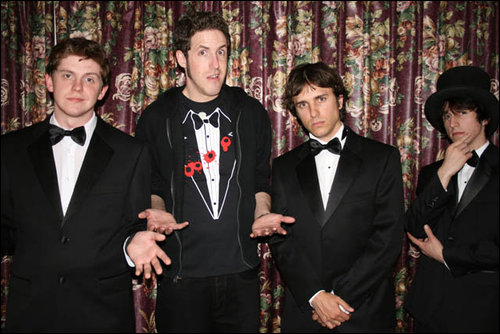 Q1: You seem like the right person to know this. What is the best way to deal with the Israel/Palestine situation?
A: Wii Sports.

Q2: There's a man outside my door wearing a purple shirt. Should I be alarmed?
A: Yes. He's a mormon.

Q3: Could you take the bloke who writes XKCD in a fight?
A: Funny story actually. I was in Boston airport waiting for a connecting flight to San Diego for the big comic convention there, when this dude randomly sits down beside me and starts asking me about my cap's design. My cap had all these weird co-ordinates on it, and he pointed out that they were co-ordinates for four major world cities. He then asked me what I was going to San Diego for, and I explained that I write a cartoon called C&H and am flying there to run a stall at the comic convention. His eyes then lit up and he shook my hand, introducing himself as "the guy behind XKCD!" I couldn't believe it. It was the craziest coincedence. Randall's a really great guy. Really interesting, well spoken and funny. He likes to play with random stuff thats lying around on the table when you're eating with him in a restaurant. I could still totally beat him up, though.

Q4: Have any of the comics occurred in real life? If so, which one(s)?
A: That one I made about the world trade center is based on a real life event.

Q5: Do you ever get writer's block? If so, what medications would you reccomend?
A: I get it all the time. It probably shows, it comes and goes. Usually I like to take a big walk around Belfast taking in the sights and having conversations with myself in my head. Hanging out with friends is great for that too. Take note of the stupid shit you say.

Q6: I could probably find this out after twenty seconds on Googlebut why "Cyanide and Happiness?"
A: http://www.wikipedia.org/

Q6: I was talking abotu xkcd in the office the other day, and the guy next to me said "I prefer Cyanide and Happiness" I then started on about Strindberg and Helium, we got talking Salad Fingers and I said he's probably enjoy A Softer World. I forget what the original question was, but as a substitute, I loved Waiting For The Bus so which celebrity guest voices would you like to star in Cyanide and Happiness: The Animated Series?
A: I like this question. Christopher Walken and Tom Waits would be cool. And Andrew WK. That guy is badass.

Q7: Could you please express your love for noodles in the form of a limerick?
A: If there were noodles in a cup
I wouldn't think to eat it up
I'd lube my poon
Like a big spoon
And treat it nice and rough

Q8: What would you do if there was a murder?
A: This question's really bugging me because there's probably a million hilarious retorts, but I have none. Hmm.

Q9: What is your favourite genre of reality TV show?
A: I only recently caught wind of "Flavor Of Love." Thats some funny shit. Some douchebag with a viking helmet and a giant clock around his head assigning tasks to 'bitches' for his affections makes for some mystifyingly hilarious television.

Q11: Do you ever do a comic then think "No, we've gone too far this time..."?
A: There's been a few I've been nervous about. Fears along the lines of "ah shit, THIS is the one that's going to make us lose our fanbase." Never happens though, somehow.

Q13: What's the best tape to use when sticking two cats together, or would you use glue? I'd tie them together using an electric eel. 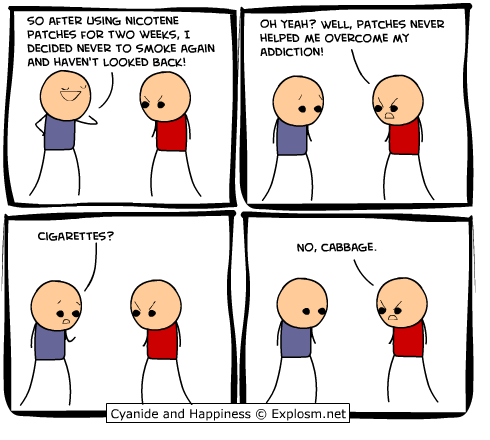 Q15: Do you know that Patrick Swayze has died?
A: Yeah. I always wonder if Whoopi Goldberg will be at his funeral, and what sort of questions she'll be asked.

Q16: How many pillows can you hold?
A: I think I could manage 6. More if I have a forklift.

Q17: Solve the worlds problems in 10 words or less
A: Shoot Wil Francis from the band Aiden in the face.

Q18: do your family know about your work, and if so what do they think?
A: Initially they thought I was wasting my time, but when they started seeing that the ball was rolling they were suggesting even more crude things to make comics about. They're hugely supportive.

Q19: What is your favourite kind of tree?
A: I favour the horse chestnut, the most fun of all trees.

Q20: How much sleep do you get a night?
A: Haha. Actually I get very little, I think I have a touch of the dreaded insomnia. I can get anything from none to around 6. Anything around 4 hours of sleep a night and I can run perfectly okay. I dunno if thats healthy or not.

Q21: Will you ever bring back the purple-shirted eye stabber? I'm jonesing for a hit of the opthalimic peeper pricker so much that I'm staring at one of my purple shirts right now....
A: Well, he's not dead. You never know!

Q22: Any plans for more animation? The last one was ace.
A: Oh yes, you better believe it. We've got plenty more on the way!

Q23: Have you ran into the law?
A: Haha, once. A bunch of cops caught me stealing a load of golf flags from a local course when I was but a wee lad. They made me march half a mile back to the course to put them back in their place, then gave me a lift in their huge cop van to a nearby town to get food. Aside from that, I'm a fine, upstanding citizen.

Q24: If you could ask gronkpan and infinite number of questions, what would they be?
A: How does it feel?

Q26: Cyanide or Happiness, Which would my girlfriend like up the arse more?
A: I'd say the latter is a result of the former up the arse. For you or her though, I don't know.

Q28: Why did you ask me to guest write a strip three years ago and then change your mind?
A: Did I? I apologise greatly. You took your time bringing it up.

Q29: Do you ever stop for a moment and think 'fuck me, this is what I do for a living'?
A: All the fucking time. I swear to god, somehow I've built the weirdest little professional life around myself. I don't think I'd change this aspect of my life for the world. Its lots of fun.

Q30: Is it true that you can't get quicker than a Kwik-Fit™ fitter?
A: Haven't you seen our new cartoon, Waiting For The Bus? Of course you can!

Q31: How come only one of you makes worthwhile comics?
A: I dunno. I guess I just have a knack for it.

Q32: What you rather bee or a wasp?
A: Wasps are vindictive dickheads. I don't like wasps. A jaunty bee is a far more appealling proposition. Jumping from flower to flower putting pollen into my sack sounds just dandy. 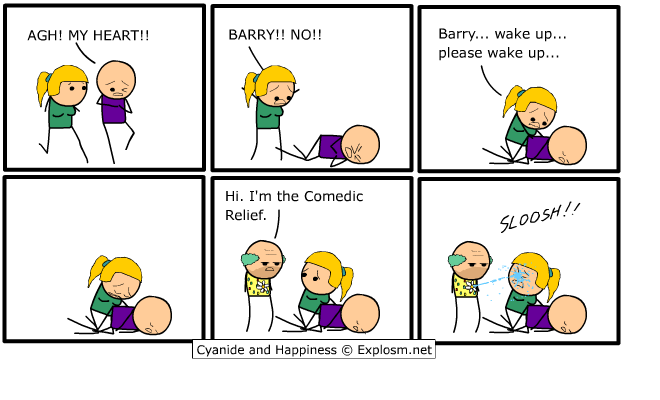 Q34: What happened to your past website 'sticksuicide'?
A: We just got bored of it. It was too much of a limitation, being that the site kinda had the whole stick figures killing each other theme going on. There wasn't much else we could put on the site and it not feel unnatural. Explosm's completely open by contrast.

Q35: What made you decide to start making mainly comics rather than flash?
A: We were all studying, so basically we didn't have a lot of time. Comics were just quicker and more fun. Now that we've graduated we make a lot more animated stuff.

Q36: Er... Aren't you going to promote your book? Write some blurb we can stick at the end of the interview.
Volume one of Cyanide & Happiness is available in all good bookstores across the UK and Ireland in October, featuring 120 hand-picked old favourites sitting neatly beside 30 brand new, never before seen, book exclusive comics for you to do some hardback lollin' to. Check it out!

BIG LINK TO BOOK ON AMAZON

* QUIZ - HOW DECISIVE ARE YOU?
* FESSHOLE - CAT NIPPLE DOCTOR SHOCK
* BBC MICROS - A SURPRISING AMOUNT OF THEM. OK, TWO