Fraser and Tomsk are long-term B3tards who've helped us run the site from almost the very beginning. Along the way they launched Kittenwar - a website dedicated to battling moggies in an international cute-off.

Success came in the form of a gazillion hits, mentions on TV and, of course, the now traditional book deal.

So we thought we'd get in touch and ask them the questions YOU wanted to ask, in the hope that if they flog millions of copies they won't forget us next Christmas.

How the hell does this concept work in a book form?
(monstrinho do biscoito)

Tom: As you know, Kittenwar works by presenting you with a pair of kittens from which you must choose the one you think is cutest. Translating this simple concept into a book was indeed a tough task. Our crack team of kittenological scientists spent many weeks in their orbiting HQ, researching and experimenting with possible formats, but the breakthrough finally came when we noticed that books tend to have two pages visible in their standard "open" configuration. Once we discovered that we could fit two kittens side by side it was a simple matter of hiring a dedicated team of technicians and programmers to process the vast quantities of kitten data stored in our secret underground supercomputer installation. We think that the book fully reflects the awesome power of what the Kittenwar Corporation can achieve. Also, it's got loads of pictures of kittens in it.

Which member of the Family would this book best be suited to if bought as a last minute stocking filler for Christmas?
(The Great Architect) 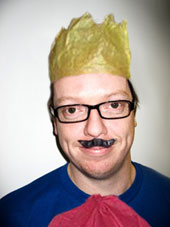 Tom: It's great for all the family! Although your sullen sixteen year old nephew might be happier with a copy of Grand Theft Alien Chainsaw Armageddon or something like that.

Do you have a cat yourself and what is it called?
(Happy Toast) 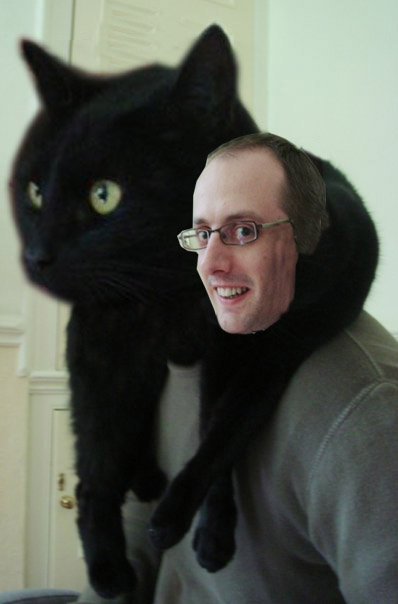 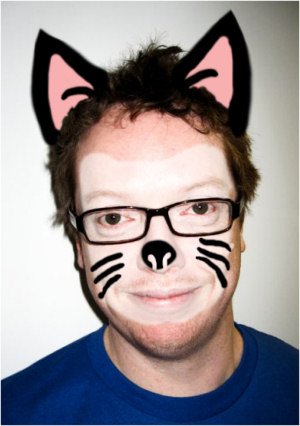 Tom: I have two cats, called Deeley and Marsha. Deeley was actually named in a kitten-naming competition which ran in the b3ta newsletter, along with her sister Stevens, who went missing (so if anyone adopted a small stray black cat sometime after May last year, get in touch).

Fraser: I'm not allowed to keep pets in my flat, so I don't. Also, I don't have a garden, and I think cats should be allowed to run wild - climbing trees, burying their cat-dirt in the earth, and slaughtering wildlife, that sort of thing.

In an actual war, what kind of kittens would come out on top? In my opinion it would be the sphynx cats, because they have the look of pure malevolent evil, what about you?
(Absynth&Cheese)

Fraser: I agree, Absynth&Cheese. Sphinx kittens tend to perform very badly on the website, and this is reflected in statistics revealed in the book. My guess is that this breeds an inferiority that slowly turns into a festering, deep-rooted hatred for those more 'beautiful', and a propensity for bloody, random violence.

What would you actually do if presented with a cluster of fluffs at the bottom of a garden, who, based on your book, had fashioned weapons and basic strategy plans to outsmart the opposition... formulating in a small but fully functional war?
(MrGomez)

Do you discriminate against ginger kittens and if not why not?
(Monty Propps)

Tom: No, actually ginger kittens are like feline supermodels or something, they do really well.

Fraser: We cover this in the book, and it's true: while human gingers are truly cursed (I know, for I am a sufferer), those of the feline persuasion are blessed with all sorts of lovely social advantages.

Should I move to Wales?
(DogHorse)

Tom: Yes, why not? Wales is okay. Pushkin the Russian Blue Kitten lives in Wales.

Fraser: I tend to tear, as chopping breaks the leaf's cell walls, hastening oxidation and reducing flavour. However, the best solution is to blanche your basil before doing either - this slows the oxidation process down, helping the leaves retain their taste.

Is this what you saw yourself doing when planning your career?
(chthonic) 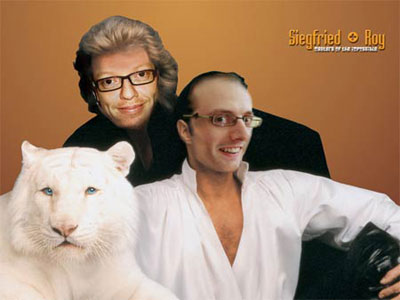 Tom: Planning my what? Actually, I have always dreamed of being a published author, but I really didn't envisage it involving quite so many kittens. Can't complain though, it was great fun putting it all together.

Fraser: It's still only a hobby, and no, it wasn't what I planned. And although it was great fun compiling everything, we have taken the process very seriously - we didn't want to write a throwaway piece of junk, so we worked really hard on making the book as entertaining as possible.

If I bred a superkitten would you fight him?
(Shuya Nanahara)

If Kittens ruled the world, what job would they give you, and would you take it?
(Shuya Nanahara)

Fraser: I like to think that they'd look at everything we've done for kitten-kind, and offer something appropriate. It's actually tempting to believe, after processing more than 130,000 kittens for the website, that I already work for cats. Quite often I'll pass one in the street and catch myself thinking, “I wonder if he knows who I am?” I am intending to seek therapy.

Tom: It's alright. I quite like Marmite on toast, but I could live without it if I had to.

Which kittens are best - boys or girls?
(Wifey)

Fraser: All kittens are equally cute, even the weird-looking, slightly freaky ones.

LOLcats: Do you approve?
(Scaryduck)

Tom: They were funny for about ten seconds, and then I realised that everyone else liked them so I decided they weren't funny anymore in order to feel superior and say things like "LOLcats are so half-an-hour-ago, hey, check out this cool new web page with the dancing hampsters".

How much influence was "The Art of War" by Sun Tzu on the book?
(Smallbrainfield)

Fraser: Not much. While Tzu's miniature classic might be of help in the boardroom, it's not much use when attempting to choose between a calico kitten stuffed into a sock and a cute grey tabby gleefully licking specks of tuna from its chops.

If I didn't hear from you is there likely to be a picture of my cat in it?
(alistair)

Fraser: No. We let everyone know if we used their picture - we wanted to make sure they were credited properly in the book.

If you were to remake a film using only kittens which one would you choose?
(Hoof Hearted)

Tom: Indiana Jones. The intro to Raiders would be even more brilliant with the addition of a giant kitten and a huge ball of wool. Also the entire extended edition Lord of the Rings trilogy acted out entirely with kittens would be a pretty splendid spectacle.

Fraser: It would have to be a war movie. Something heavyweight, maybe All Quiet On The Western Front. Or Das Boot.

If you were a breed of cat which cat would it be?
(Hoof Hearted) 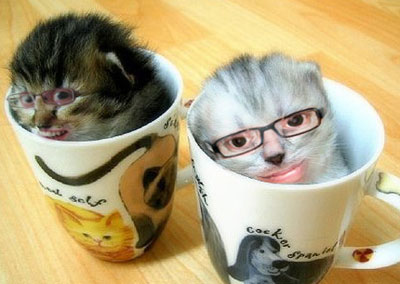 Tom: I'd like to be a sphynx, one of those freaky hairless cats, in order to really weird people out, and also in honour of my rapidly receding hairline.

Fraser: A Scottish Folds. They have really nice ears.

When are you starting Puppy war?
(Joe Scaramanga) 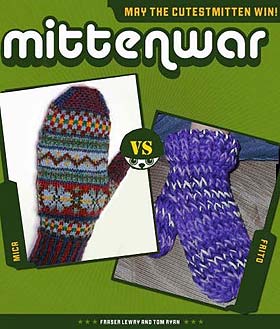 What about a handy link to Amazon so we can buy this completely amazing book?
(Rob)

Tom & Fraser: We thought you'd never ask. It's available on Amazon UK and Amazon US.