Maddox has been rocking the web since '97 with his unique brand of arrogance and cynicism. He's recently broken out of the web ghetto to produce a book and enter the best sellers lists, so we thought it was high time to catch up and ask him the completely irrelevant questions that a proper publication wouldn't bother with.

Tell us your favourite joke?
(Rob)
My favorite joke lately has been:
Q: Why did the little girl drop her balloon?
A: Because she was getting raped in the face.

That one is pretty terrible, so here's a backup in case you don't want to run the above:
Q: What do you tell a woman with two black eyes?
A: Nothing. You already told her twice.

Why does tapioca go hard when you leave it on the kitchen counter for a week?
(Riverghost)
Tapioca is a glutenous food. Unlike breads with butter or shortening mixed into the flour, the distribution of tapioca pearls throughout a mixture is relatively discrete; that is to say, the mixture is not homogenous. The moisture that was absorbed by the tapioca when it was boiled will evaporate over time, leaving the glutenous pearls hardened. This process is slowed down by fats that bond to proteins in gluten, so the time it takes to harden is proportional to the fat content of the tapioca. 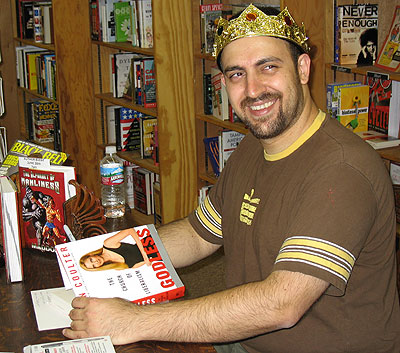 You are a true hero of free speech. How have you kept up that level of cynicism for so long?
(Jimvin )
This question suggests that I need to consciously "keep up" a level of cynicism. It's not a conscious effort, so much as a byproduct of radness. Specifically, my radness.

Why do you use white text on a black background on your site?' It really fucks my eyes.
(mictoboy)
Then get better genes. Or hit ctrl+a to highlight all the text, effectively inversing it. But if you do, shoot me an email with your IP address so I can ban you from my website permanently for being such a pussy. 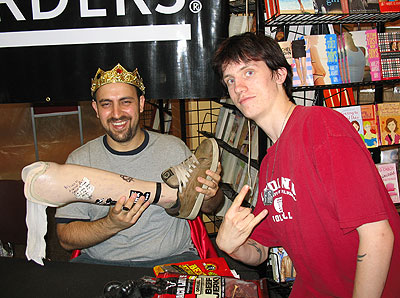 Ask him about the 'mothers against maddox' group.
(soul_swallower)
Nice question, asshole. Could you get a bit more vague? I haven't heard anything from the group since its inception. A few of my fans pretended to be on her side to feel her out, and actually received a few responses from her in the beginning. I was relieved when I first heard about the site, because for the longest time I thought my mother was the only one who hated me.

If you could be any ice cream flavour, what ice cream flavour would you be?
(CactusEater)
I'd be Rocky Road. You'd be eating me, enjoying the chocolate and marshmallows when BAM! All of a sudden you have nuts in your mouth. 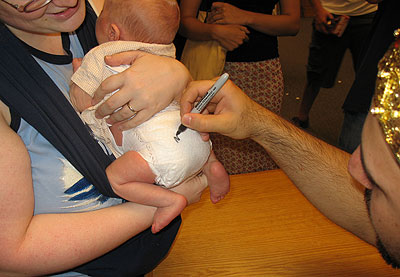 Why do puppies have wet noses?
(Zank Frappa)
Because they haven't been microwaved long enough.

Who should be crucified?
(Rob)
Remember that little girl from those Pepsi commercials a long time ago? The one with crater dimples? Yeah. 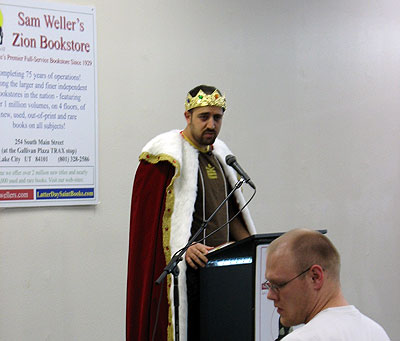 What music/artists/tv do you actually like?
(masterconnor)
I'm currently listening to a Brazilian metal band called Overdose. They're real metal, not like all this screechy bullshit that bands are trying to pass off as metal today. Other than that, I dig bossa nova, electronic loungey music, down tempo stuff. Here are a few names: Wagon Christ/Luke Vibert, Towa Tei, Del, Dimitri from Paris, Mix Master Mike, Pantera, Pancho Sanchez, Cal Tjader, Jaco Pastorius, and a fuck load of classical: Shostakovich, Prokofiev, Mussorgsky, Borodin, Bizet, Honnegar, Saint Saens, Ravel, Satie.

Which is the most sexy, cats or goats?
(Homonk)
Cats, assuming the cat looks exactly like me.

Which is better? Books or websites?
(Rob)
Depends. For hitting someone in the face, books. For reading? I don't know. I don't read anything other than my own writing. 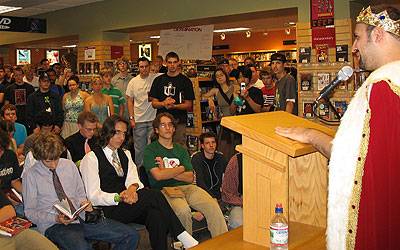 Have you ever been wrong?
(masterconner)
No.

How old are you?
(Scoopzilla)
Still 28, give or take the amount of time it took to type the last three or four sentences since the last time I answered my age in this interview.

If the internet hadn't been invented would you spend your time on busy high streets ranting at anyone who isn't quick enough to get away?
(homonk)
No you moron. Though, now that I think about it, probably.

At what moment did you feel most famous?
(Rob)
When someone sent a copy of my article titled "I am better than your kids" to me, saying "hey, check this out!"

How much has that book made you so far?
(Quetzacoatl)
I don't know, I won't see a cent of my royalties for another 8 months. Authors don't make shit anyway. I'll be netting a buck or two per copy, and people don't buy a lot of books. If you're able to sell 3-4,000 copies per week, you'll make it on the New York Times bestseller list. Very few authors sell in the millions, or even hundreds of thousands. If a book sells 15,000 copies, normally a publisher is happy with that.

Should charges be brought against Kool Aid for aiding and abetting in the Jonestown massacre?
(M3Essential)
Yes. I'm certain that if another beverage were used, perhaps one that wasn't so deliciously refreshing, far fewer people would have died. Say Tang, for example. Although honestly, I prefer Tang. Did you know that there's a pineapple flavored Tang? It's true, look it up.

What's the funniest thing you can do with an ipod?
(iVampireMonkeyOnSpeed)
I tea-bagged a friend's iPod, and from that day forth, we called it a tPod. He was pissed, but he still used it. I think the message he was trying to communicate to me was that he secretly wanted to cup my balls.

Have you thought about writing a book to rival Nietzsche's "why I am so wise"? What would you call it?
(coRPse)
Nietzsche is the go-to philosopher of every coffee-house pseudo-intellectual. I refuse to fall into that trap.

Who's the king of the internet? You or David Hasselhoff?
(Rob)
Me. Though an irrelevant German cult icon from a relic of bad 80s television takes a close second.

Lutraphobia is a fear of otters. What do you think the worst affliction is?
(Stallion_Explosion)
For a second I thought that said "Lutheraphobia," as in the fear of Lutherans. I think I just coined that. The worst affliction, however, is probably AADD - adult attention deficit disorder. It's a more verbose way of saying "I'm a dumbass."

What's your drug of choice?
(Rob)
Drugs are for losers.

Are you scared of anything?
(Stallion_Explosion)
Really scary Halloween music (the scary kind).

What do you tell people was the first album/single you bought? and what was the first one that you really bought?
(robtoo)
The first CD I bought was The Chemical Brothers: Exit Planet Dust. Before that I had a bunch of cassette tapes, mostly recordings of Pantera or Sepultura.

What is the biggest thing you've killed with your own hands?
(Rob)


The ego of an old co-worker. The guy had Napoleon complex, and I brought him down to size by pointing out he had a small penis (according to a few of his ex-girlfriends). Normally nobody would care, but that's all this guy had going for him. Two and a half inches. Hard.

Which urban legend were you convinced for years really did happen to a friend-of-a-friend?
(robtoo)
The coke bottle in the vagina story. I believed it until I was about 9, at which time another friend from a different school told me the exact same story.

Who's the most famous person you've met? In retrospect, would it have been funnier to totally blank them?
(robtoo)
I've met Bruce Campbell and Al Gore. I think Bruce Campbell is probably more famous. You'd be surprised what murdering someone with a chainsaw can do for your public image. Take note, Gore.

What websites do you rate?
(Rob)
I don't know what that means. Keep in mind I'm a yank, and we yanks don't know all your crazy slang words.

What's the crappiest present you've ever bought someone?
(robtoo)
I bought a friend a portable zen garden once. It was basically a small plastic box with a small plastic rake. You're supposed to rake patterns into the sand. It's a shitty gift to begin with, but to top it off, the sand wasn't included. 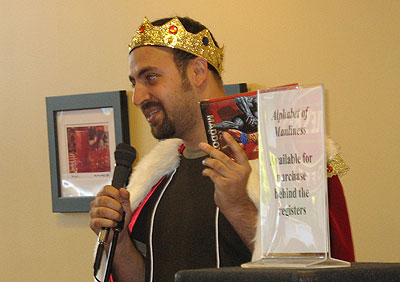 What's your party trick?
(robtoo)
I don't like parties, so I avoid going to them whenever I can. I don't have a trick to perform like some stupid seal.

I'm having a party this weekend. Give us the recipe for a new cocktail.
(robtoo)
Check above, bitch!

Go on then. Plug your book.
(Rob)
The Alphabet of Manliness: so manly, even its sentences don't have periods. It's been on the New York Times bestseller list for 11 consecutive weeks now. This caught the entire publishing universe off guard, because they're not expecting a book with a man punching a gorilla in the face to do so well. I believe it's a new precedent. Buy it now or go to hell. 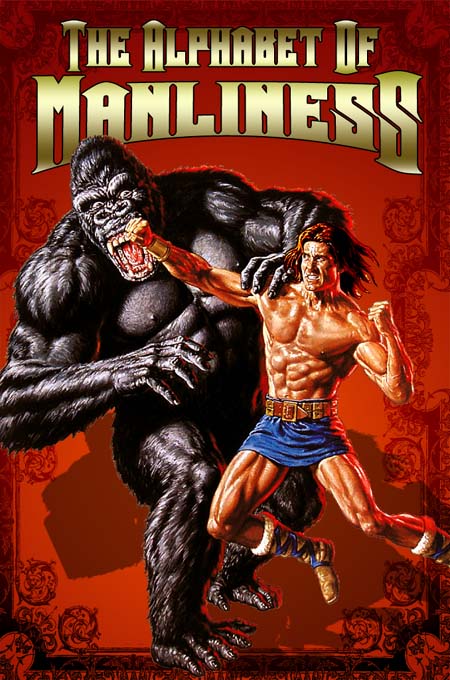 Clicking the book takes you to the Amazon sales page.

Interview conducted by Rob Manuel with questions supplied via the B3ta board. Thanks to Maddox for agreeing to take part. You may also wish to look at the promotional site, or The Best Page In The Universe.