You may have heard his work - it's become hotly traded on the Internet - including the EastEnders cut up Pat 'n' Peg (You bitch! You slag!), and Introspective, which took samples of the introductions to 100s of different pop songs and turned them into something between a dance record and a music quiz.

After seeing him DJ at the King of Boots club night, we got in touch & asked him the questions that you wanted answers to. 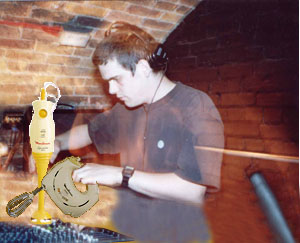 What have you been doing today?
(rob)
Trying to figure out how to make a website without any previous experience...should be dead shite but will at least be informative. Just got back from the NME Awards where lots of famous people walked about hoping people were looking at them, Kylie was there but she avoided me, possibly asnub cos of my unofficial remix, I dunno....

Who is up & coming?
(rob)
Erm, got the new album for the Summer, a sort of sample free affair (almost), a series of video shorts for Channel Four, the Intro-inspection EP, doing a new mix that goes beyond anything I have attempted before, some vocal tracks with a dead good singer, there is also a Cornershop remix out on the 4th March.

How much of an influence were the KLF?
(monkeon)
They were a massive influence when I started although not so much now.

what real life collaberation would you like to see (eg Cher and Jonathan King)?
(monkeon)
Metallica and Westlife doing Can't Get You Out of my Head in German.

How do you swim?
(monkeon)
Forwards. 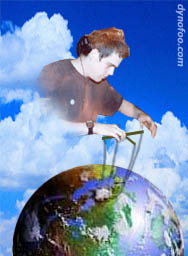 You can't own remix ideas. Have you been ripped off yet?
(rob)
There is a definite possibility, but loads of people are doing similar things, it's impossible to say who did what first and why.

Have you met anyone famous?
(rob)
Yes, I met my all time hero recently....guess who?

What software are you using to do your boots ?!
(antoine)
Cubase and Wavelab on a PC, yes I know it's meant to be Logic on a Mac but it's results that count eh?

If Chris Rea offered you money to remix 'Driving home for Christmas' would you do it?
(MartinH)
Yes, no question. Trying to make a 'cool' record cooler isn't half as much fun as being let loose on some piss poor MOR drivel. Atari Teenage Rea sounds like a bit of a laugh don't you think?

Where did your name come from?
(crab_bloke)
I made it up on the Jubilee line circa 1994.

You do know that every journalist will ask you that until the day you die?
(rob)
Yes and I will make some really good lies up along the way.

If you weren't mixing what sort of real job would you be doing?
(MartinH)
I have a real job you cheeky git, but I think I know what you mean. I would be a Graphic Designer as it is what I did at College etc. 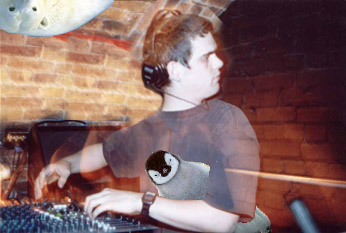 Anyone sued you yet?
(rob)
No, unfortunately. Simon May (Eastenders theme man) invited me out for a drink though....

Do you have any pets?
(rob)
My cat from when I was a teenager is still going strong, lives with my folks.

What is the X-factor, or skills you need to be a good remixer? I often have to listen to mate's remixes on my walkman and say they're good but they're crap.
(MartinH)
Smearing your personality over someone else's art and pumping the results. Enjoyment.

Fatboy Slim... World-Class remixer or Celebrity Ponce?
(vulga)
Norm is just brilliant, no question. It's all too easy to knock what he has done over the years is remarkable and he handles celebrity incredibly well, I don't think he is anywhere near being an arse. He gets my vote.

What did you think of the noticeable influence of DIY remixing in this years Brits?
(rob)
It's like someone else stealing all the credit for something myself and others have been toiling over for years. But I think you'll agree, it aint as good as the real thing. (does that make sense?)

Where do you see the whole bootlegging phenomenon going? Will it still be around in a year's time? Do you think it can be easily assimilated by the industry in the same way that sampling was?
(thorpe)
Well as far as I am concerned it's over, I can't get the fun out of it I used to. I always did it for myself and the few people who came to see me play and now 'the industry' are trying to cash in on the whole thing and it just won't work because the whole process of legalising these tracks will remove the spontaneity that made them work in the first place. I'm not anti-industry but the bootleg thing will only work on a small scale. 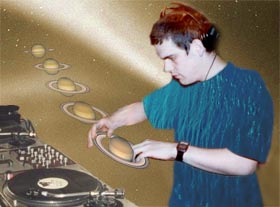 If you had to drink one of these mixes, which would it be:
* cola and ribenna
* vimto and frij
* red bull and milk
(monkeon) Number two please.

What happens when renegade remixers (like yourself) get signed?
(thorpe)
What people often don't realise is that I write new sample free music and fully intend to get signed to a big record label with stacks of cash and when this happens it will be none exclusive allowing me to run a small label on the side for the continuation of so called 'illegal' music releases. I will still make all these cut-ups and legally present then to the world through mixes on the radio and when I play live making sure there are Mp3 copies for everyone to pass around. So even when signed to a major people will get more and more of this stuff....

I hear you are very young. What is the secret of eternal youth?
(monkeon)
Being clean living, fit and healthy...... 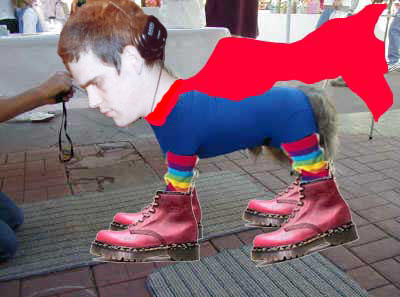 Do you think it will ever be possible to release something like Intro Inspection legally? And would you want to?
(thorpe)
I didn't even intend to release it at all it's was just for radio and live stuff but it seemed to be received well enough to justify a small release. I know for a fact it is impossible to release due to the opportunistic nature of 99% of publishers, even if all the living artists involved in the record gave written approval their Lawyers would put a stop to it so I just could never be bothered even entertaining the idea. Besides releasing a record is only one method of distribution and between gigs, the internet and radio thousands and thousands have got to hear the track and that to me is all that counts.

Where do you live?
(rob)
North London.

Who would you most like to wipe off the face of the earth... Purple Ronnie or Dane Bowers?
(bazman)
Dane Bowers.

How big is your record collection?
(cub)
It was enormous once but I have embraced the digital age and chucked out all that heavy old vinyl, kept the classics though.

Surely you nick all your tunes from Audiogalaxy or Morpheus?
(scabby dog)
Yes and no, if a track is really really good then I will go out and buy it.

Which is the better word: "Moo" or "Moose"?
(lumpbucket)
Moo, I love that word although I probably find myself using Moose more in conversation, when describing a girl who looks erm, below average in the looks department. 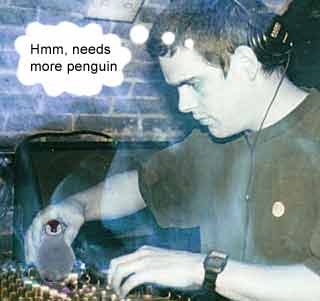 Has bottlegging ever got you a shag?
(rob)
I'm afraid I can't see how splicing pop tunes together with a PC could lead to fornication?

Who would you rather get off with? Anne Widdicombe or The Queen Mother? And why?
(Nacho)
The Queen Mother so I could finish the freeloading slut off with a Glasgow Kiss.

If civilians aren't for raping and pilaging, what the frickin' fuck are they for?
(louie gukam)
Ripping off.

How long on average does it take to knock a tune up?
(pickledpizza)
A sample free track from scratch takes me a week and a bootleg jobby is crapped out in about 4 hours or so.

Is there any boots that look good on paper, then fail?
(pickledpizza)
You bet there is, the one that always gets me is a track that is perceivably fast and turns out to be slow, freaks me out every time.

What next?
(rob)
I want to surprise people, don't expect me to milk my current sound for too long. I've got some music in demo form that is a totally different from what you have heard from me till now.....(news and info at www.osymyso.com once I've figured out how to build a site, give me a week or so.) 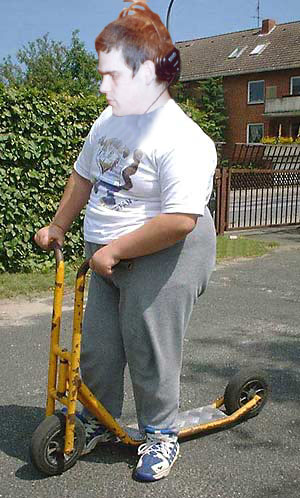 Thanks to everyone who submitted pictures including Cthonic, Breel and er... we've lost the list. Can you remind us?