We first heard of Peter Serafinowicz with the wonderful first season of spoof science show Look Around You, created with the equally lovely Robert Popper. For the second season they got in touch with B3ta and our community helped create graphics for the computer games episode.

Since then Peter has become an absolute star of Twitter - with over 400,000 people following his nightly gag sessions. We thought it was about time we caught up and asked him the questions that our members wanted answering. Take it away B3tans: 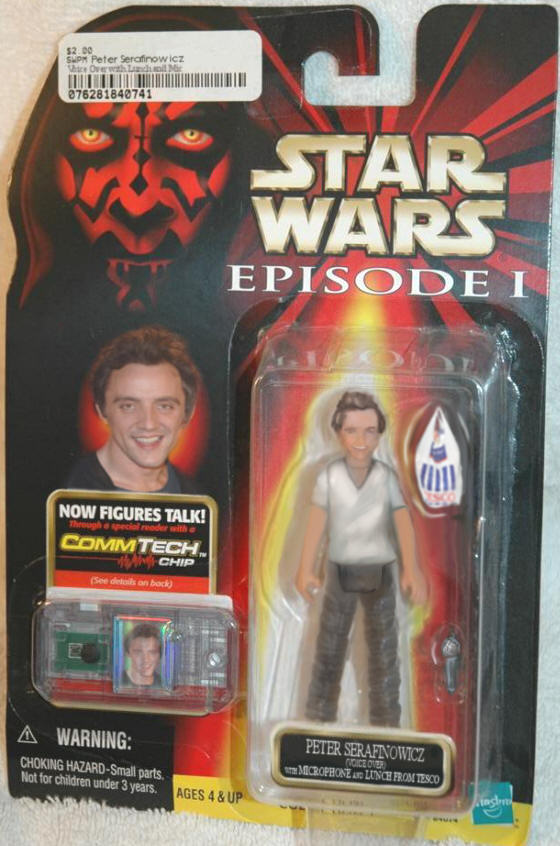 Not available in the shops... yet.

And what's your favourite Darth Maul memory?
(HappyToast)
The moment just before the film began.

inny or outy?
(HEKIM)
I'd describe my vagina as an 'outy'.

How do you like your eggs?
(Christian's Bolt and Ski)
De-shelled.

What does Sir Macca think of your impression of him?
(ERG1008)
I don't know- I'm not even sure if Sir Robert McAlpine has heard it!

I was in Shaun of the Dead but not on the same day as you so I missed your nude Winchester scenes Did you go fully buff or was there a little flesh-coloured posing pouch protecting your dignity?
(emvee this is the day)
I wore a full latex body suit, with a hole for my penis to poke through.

Who's worth following on twitter?
(rob)
People you may not have heard of: @robdelaney @mkupperman @jimjeroo @beardyman

Whose voice makes *you* go all wobbly?
(chthonic)
Joanna Newsom's.

Is your twitter account a way of engaging with fans or gathering ideas for later use? Or does it have a life all of its own?
(Christian's Bolt and Ski)
All three, and lots more besides. I use it mostly as a public joke pad, or a really slow standup gig.

The look around you music was nice. What music have you recorded lately?
(_Felix Worried?)
Thanks! Nothing much, I'm trying to learn how to rap though.

Peter. I am writing a Mills & Boon novel and I'm looking for a romantic euphamism for the vagina. My friend Frank says 'growler' is perfectly acceptable. Do you agree or could you suggest an alternative?
(Captn Hood-Butter B**H)
'South-Mouth'

Can you ASCII your own face?
(Man of face)

Out of Simon Pegg, Nick Frost and Edgar Wright, who annoyed you the most and who is the tenderest lover?
(HappyToast)
They are all surprisingly rough lovers. And that annoys me!

Your dancing at the start of your show was quite impressive. Do you like to dance and what is your favourite style?
(HappyToast)
Thanks. I can't really dance, our editor and huge geek Paul Machliss (Scottish Eddie Yorque in LAY 2) created the illusion.

you often look either really tired or really bored on those panel shows are you having trouble sleeping?
(mutated monty)
Thanks! Yes I do have trouble sleeping. Sleep is something I can only dream about...

How do you think the internet has already effected / will change comedy in the future?
(monkeon schmonkeon)
Who knows? We're right in the middle of the beginning. It makes me giddy when I get an email from say 2008 and realise how much the world/internet has changed since then. In terms of comedy: People need to find a way to make money from doing comedy - there's a quality ceiling with anything you do for nothing.

Which roles have you auditioned for, but didn't get?
(monkeon schmonkeon)
Lots of em! I hate auditions!

If you got a financially equal offer for a sketch show on TV and for doing sketches for the web, which would you choose?
(monkeon schmonkeon)
Without a moment's thought: The web, definitely! 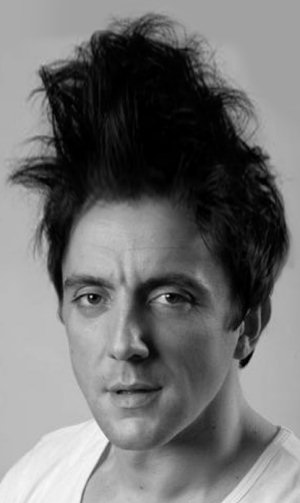 Are you aware which of your jokes will go down the best before you tell them, or does it sometimes surprise you which are popular and which aren't?
(monkeon schmonkeon)
No, although I usually have some idea. I've recently started doing standup, and I now know that people pretty much hate any kind of pun when told onstage.

do you sometimes find yourself marvelling at the utter badness of modern comedy shows and ponder whistfully to yourself about the incomprehensible sequence of events that could have allowed them to be made?
(mutated monty)
Yes! All the time. And not just comedy shows. Have you seen a film recently?


I've never had a knack to do accents and voices - got any tips?
(rob)
2 things: Listen; and copy other impressionists. But you do have to have at least a mini-knack. I think everyone does.

You were awesome in Look Around You. Had you ever considered a career in science?
(2 Can Chunder)
Thanks! When I was a kid I wanted to be an archaeologist. I'm very interested in science now, and get pretty annoyed by things like 'alternative medicine'. Although for a period in my 20s I believed that aliens were trying to communicate with me.

How did you begin your career as a comedian?
(just4fun)
I made a tape of me doing lots of different voices and sent it to BBC Radio 4 when I was 17. They gave me a one-off job on the weekly satirical show WeekEnding, then produced by Gareth Edwards - who now produces Mitchell and Webb amongst many other things.

I can't think of a good question, but I'm a massive fan of yourself and Richard Herring. Please can you ask Graham Linehan to do the next b3ta interview, thus creating the three most awesome b3ta newsletters ever?
(Peregrin)
Um... ok! Thanks.

If you died then came back as a zombie...who would be the first person you'd eat? and why?
(prodigy69)
Stephen Fry. His brain must be delicious!

I'm not racist but... what's your favourite day of the week? I bet it's Wednesday.
(Brims Fuck mini babybel!)
I am racist, but... I love all people regardless of creed or colour. Yes it is Wednesday!

Which is more important to you; a regular income or artistic integrity?
(Godwin's Lawyer)
I strive for both - if you get at least one you're doing ok.

what kind of razor do you use, cheap bic, gillette mach-eleventy or proper old straight razor? Do you get grumbled at by the missus if you haven't shaved because 'you're all spikey'?
(Thor_sonofodin)
I use a Gillette Mach 9 - "The 2nd-Best A Man Can Get" 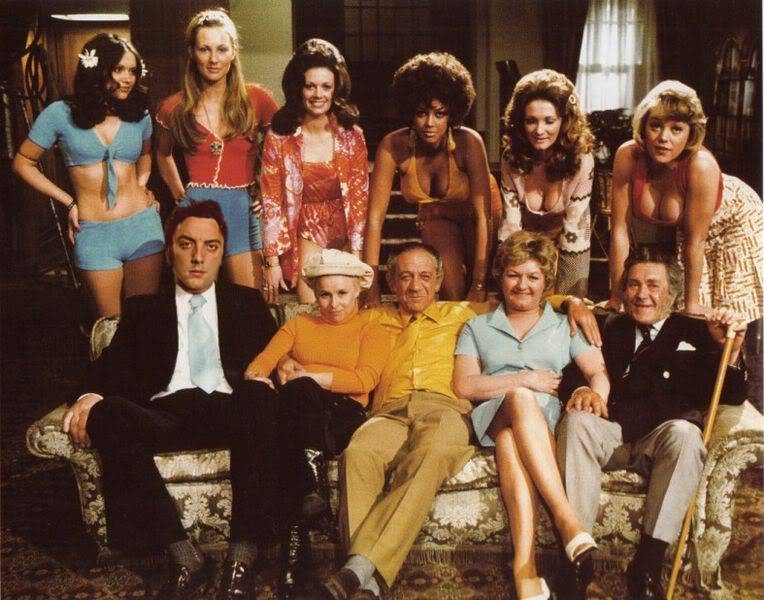 Junkies - Was it purely the drug-related content that prevented Junkies being made for TV? I still remember and laugh at Big Al listing his Hepatitis strains or Sal mis-stressing Rolling Stones at least once a week.
(Sallow Stoat)
I have no idea! I think it really was one of those things that was ahead of its time. It took about 2 months to download the thing - maybe that was why!

What was your favourite "science" from the first series of Look Around You? Were there any "science" ideas that you liked, but ended up not being used?
(Lumpbucket)
My favourite was Sulphur I think. We always wanted to do one about Gold, it was pretty funny.

Did you ever cop off with Joan Collins - There was definitely some chemistry between you and her on HIGNFY?
(MontyyouterribleCUNT)
No. She was extremely attractive in real life though!

Re: That Hot Chip video you apparently directed. If you could destroy just one boy band with energy flowing from your gaping mouth - which would it be and whyyyyyy?
(e.m.m.y.)
Probably U2. That would totally be on the news!

What "proper" job do your parents still secretly hope you'll get?
(sandettie)
They would've liked me to go into medicine. I'm still a keen amateur dentist.

Why was Internet Ham from your sketch show so funny?
(scarydylan)
Thanks! There were lots of very funny people involved.

Have you ever put all your underwear on at once and strutted about the room as if you had a really fat arse?
(sandettie light vessel automatic ah fuck it)
Ummmmmmmmm. No.

Has your ability to do impressions ever got you into trouble, or saved you from a difficult situation? (like getting into a fight at school, say...)
(enceladus)
I used to get into a bit of trouble impersonating some of my schoolteachers. And sometimes I would get beaten up for being a smartarse.

If you could re-make any film in another style, which film would you choose and how would you change it?
(enceladus)
Great question! I'd love to make The Godfather but with kids, like Bugsy Malone.

How did you feel when the Beeb put canned laughter on your show during the re-runs?
(The Moop)
It wasn't 'canned laughter' - we showed sketches from the show to my Christmas Special audience. Me and James (my brother,co-writer and Series Producer) thought hard about having an audience track on the show - in fact we screened the first two shows to an audience, and planned to do that for the whole series. However the night before the first show aired, we decided not to have a laugh track. I think the show may have been more successful with laughter, as it made some of the weirder bits more accessible. But a lot of the show has its own life now on YouTube, where I think a laugh track might spoil it a bit.

What's the best bad spelling/pronunciation you've had for your surname?
(itsOnlyGoingToGetHairier)
When my TV show went out on the BBC, they mispronounced my name every single time! Really.

If you could punch any animal in the zoo, what would it be?
(M. Oignons)
My birthday! 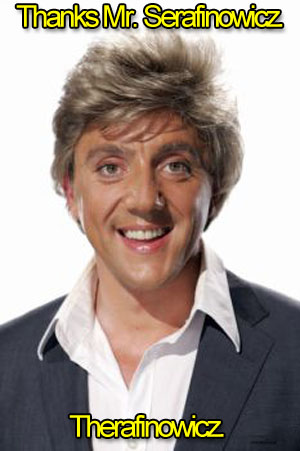 Thanks Peter for the interviews and thanks to HappyToast, Smallbrainfield and Lumpbucket for the images. If you want more Peter Serafinowicz follow him on twitter and buy his lovely DVD.