i play with cheese. i like to roll it

Glastonbury 2005
The storm. The rain. The flooding.

Everything pailed in comparison upon seeing one man wade through waist deep water, find his tent and dissapear, followed by an excalibur-like rise from the deep, a crate of lager upon his head.

After that nothing got me down all weekend.

For those not there... 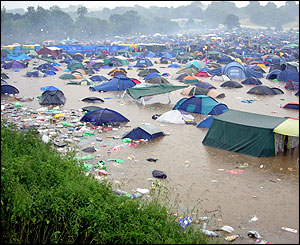 Dad 1 - 0 Daughter
Hide and seek with the daughter. Made a fake me by hiding lots of cuddly toys under her bed covers and hid behind the door.

during a
rather long session of drinking to celebrate finishing a levels, a shortage of skins made a trip to the local garage neeeded. No one had coats, so i leant them my dads bright orange waterproof chemical jackets. on the walk to the garage, someone decided it would be a funny idea to start redirecting traffic (this was at 12 am so the roads were pretty empty). Yet we managed to get two cars to pull over and turn down other roads. We were doing rather well until the third car was full of rozzers. GIving chase over the local feild, they never managed to find three blokes in luminous orange jackets. The jackets now have a joseph dreamcoat status.
(Fri 9th Jan 2004, 0:30, More)

One Christmas
I visited the lovely electronic giant Currys local emporium. The whole time I was there I was tailed by a security guard. For about 20 minutes. Then I left as i felt really uncomforatble that I was being eyed up as a theif.

Its ok though, It turned out that I wasn't followed because they thought I was shop lifting, they just thought I was a tramp coming in to cause havoc.