two dogs and a duck
yep, we used to have a cat as well, but these pictures are probably worth a long story: 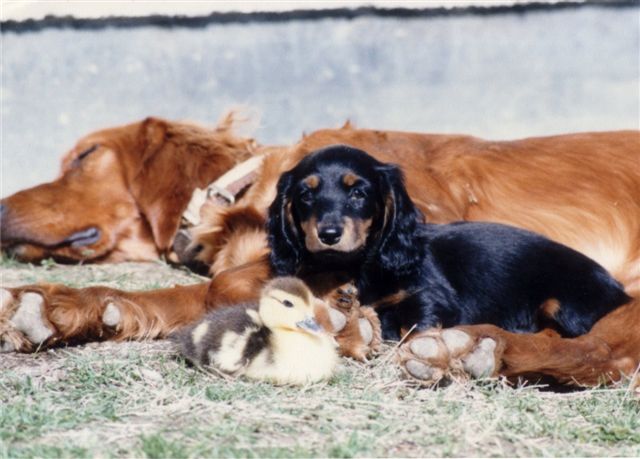 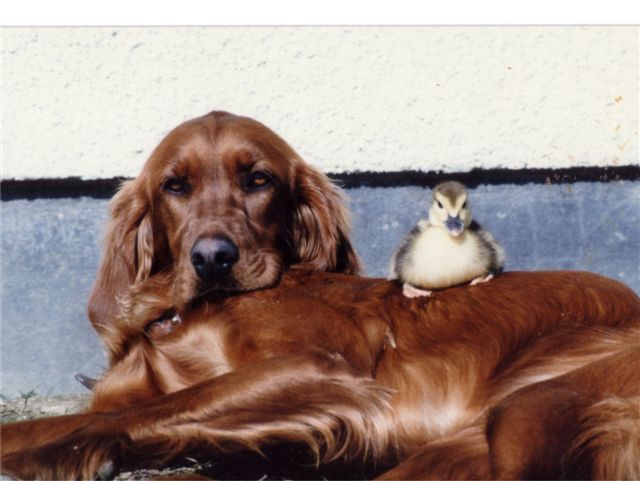 repost
This story happened to my sister, who was driving back down the mountains from andorra-la-vella (everyone in the toulouse goes up there now and again on a sunday to stock up on cheap booze and fags)

The road down is obviously windy and narrow, so you have to be pretty careful, it can get slippery with ice and stuff... anyway, she's driving down and some prat in a 205 GTI comes up behind her, driving real close, after a while trying to overtake, driving like a twat, flashing his headlights, beeping his horn and generally behaving like a berk.

Eventually after a while he manages to overtake and disappears past the cars in front.

Then a few kilometres down the mountain, she turns a corner and there's the same guy, his car up against a large rock, water and stuff spewing out of the front, a complete write off, and the bloke standing next to it, looking at what's left of his car... so my sister slows down, opens the window, looks at him and goes "AHAHAHAHAHAHAHA", which made the bloke go all red and start shouting "GROSSE PUTE" (which i'll let you translate for yourself) and other lovely french expletives.

Le minitel
I've been living in France since i was seven, so bear with me: Over here, before internet we had the Minitel which is a pretty crude attempt at a sort of phone network terminal, just a screen, a keyboard and a modem, useful for national yellow pages searches, etc.

Of course, a few minutes after it came out, it'd already been subverted to be used for sex chat services. If you've been to france in the 80's-90's you might've seen ad campaigns for these lines, usually 3615 (something) with a picture of a big breasted lady on it.

Anyhoo, during my stint at toulouse university, i answered an ad in a local paper, and ended up working for one of the companies behind the services. Basically i was paid to pretend to be a bunch of women, and had to get the sad saps who connected onto these things to talk for as long as possible.

As for the TMI part, well, i suppose any part of the conversations could fit in, but the weirdest was the fact that these services would have "hotesses" at the beginning of the listings, somebody supposed to represent the service in case of a conflict between two connectees or something... the thing is, a lot of blokes would connect on to the service only to talk to the "hotesse", and we each had our own. I was "Virginie". Erm, thats TMI already. They did so under the reasoning that "at least i know it's someone real", without imagining for one second that i might not be a foxy french lass but a slightly podgy student from bristol, who is also controlling "Emilie F25" and "SEXY GIRL 22a".

We also had a PO box so at xmas some of the clients would send chocolates and stuff.

So one of these blokes who only talked to my hotesse started asking me to come on a cruise on his yacht which was moored in st tropez, blablabla the whole nine yards... i knew he was in his fifties, and as a laugh i asked him to send me his photo.

One picture was sort of a shot of his top half, naked. He had a moustache and looked like some pervy uncle, which just in itself was pretty scary.

The second picture was him TOTALLY naked, and seemed to be at a party, talking to someone with a glass of whisky in his hand.

Waaaaaaay too much visual information... shame i didn't get to keep it, i could've scanned it for ya.

As for the rest of them on there, it was usually along the lines of "i'm at home, stroking my whatsit, i wanna do you on the coffee table"... i could waffle on for ages about it, an awful job, really awful, two and half years of TMI really.

One other bloke would tune in every single day for two months, and in the end got a 50000 franc phone bill (roughly 5000 pounds), and he had to sell some property to pay for it.

the only thing positive things i got out of it was fantastic sex with a married girl from Amiens, and the fact that i can type really fast with only two fingers.
(Mon 10th Sep 2007, 12:41, More)

just remembered
i woke up the morning of my sixteenth birthday, went downstairs, had my breakfast, got ready for school and stuff, then left, slamming the door and shouting "THANKS FOR FORGETTING MY BIRTHDAY".

golf clubs and batman...
when i was four, my old man was showing my 18 year old cousin how to swing a golf club in our garden, standing behind him and swinging it with him... then just as my father stands back and says something to him about swinging it alone, i come running up the lawn right into the 7 iron's trajectory.
It knocked me out, i woke up in the ambulance, i still have a 4 cm scar on the side my chin, i can feel the dent in the bone and sometimes i make a clicking sound when i'm chewing.

(but the scar is in the same place as action man's, so at school that was pretty cool)

oh and when i was seven, i was obsessed with batman (the corny tv show, this being 1979), and the way he could seemingly jump from building to building so i tried jumping out of my bedroom window onto the lawn, my bedroom being upstairs, obviously.
I dented the lawn a couple of inches deep, my old man first started yelling at me as i lay on the ground, then took me to hospital, and they sort of asked questions along the lines of "erm, did he jump or was he pushed", so i guess they couldn't believe i'd be stupid enough to jump out of a window. I wasn't really damaged though, surprisingly.

as for really bad parenting, thanks to years of being underappreciated, unsupported, never really listened to or trusted, i've inherited shitloads of neurosis, repressed anger which seeps out at inappropriate times and an unhealthy taste for getting smashed off my nut. So THANKS for all of those!