My family created a float again for this year's village carnival...


See it at http://www.thewoodfamilyfloat.blogspot.com
Last year was this... 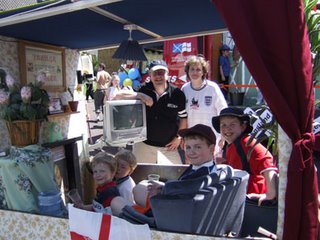 zaphodswombat at somewhere like gmail.com is where you'll get me

One of my 4 year-old sons made me something for my birthday. It is called Sock Thing. It's the thought that counts. Some B3tans made him come to life...

By The Great Architect

By The Great Architect

By the hedgehog can never be buggered at all 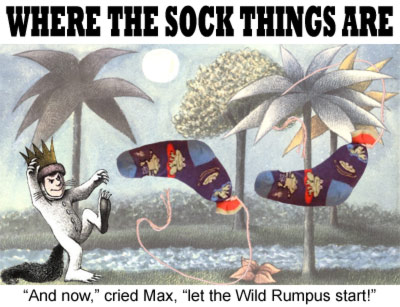 by Quite A Flabby Undercarriage here's the t-shirt SuperTim gave to his mum, Mrs ZW, yesterday...
- she loved it! I had a large horrid wart on my finger for years.
As I do table-hopping magic at times, it caused me problems and looked awful.

Fortunately, I was in the lift at work one day, with a young secretary. We were doing some playful grappling(!) and my finger knocked against a metal strut. The wart was sliced cleanly off. There was a LOT of blood. I had to go to hospital and was embarrassed about how I was going to explain what had happened... (I wasn't, though, as the guy in front of me was a postman who had been bitten on the bum).

I was helping out at a Cub Scout camp...
We were on a 'midnight hike' (ie 9.30pm) and having a nice wander and chat with the kids. One 8 year-old lad engaged me and the leader in charge in a conversation about animals. We got onto the subject of voles. Out of nowhere, he suddenly said "I wonder what it would be like to push a vole up your bottom?".

You could have cut the silence with a knife.

oh yes...
Mrs Zaphod's Wombat had a gran. Whenever the family visited them, they took her a box of chocs as a gift. When they left, Gran gave the kids a box of chocs - different ones of course. One year, Mrs ZW spotted Gran putting the new box in a wardrobe on top of about 2 dozen other boxes. She then took one from the bottom to give to the kids. Turned out chocolates made her do drippy shits so she gave them away (the chocs, that is).
(Thu 23rd Sep 2004, 16:37, More)

In the 1980's I was 18 or so...
...and escorting a group of 6 9 year-olds from London to Leeds for a disadvantaged kids' holiday. We were bombing along in a comfy intercity train at 125 miles an hour or whatever, when suddenly there was a big thump.

Someone had jumped off a bridge and landed on the leading corner edge of our carriage. His body had burst open upon impact and his innards were squashed all over our window. Poor feller (we knew it was a man, we saw 'outards' as well as 'innards').

The children weren't that happy, believe it or not. We had to stay there as the train stopped and the staff came to inspect the damage. They wiped the messiest and lumpiest bits off our window eventually and were limped into the next station, where we had to get off.

It wasn't all bad though, on the platform we met top singer of the day Marc Almond (out of Soft Cell) and the kids cheered up. I think this was the days before his stomach-pumping.

silly tourists...
I overheard two old ladies in Hyde Park last year, looking at the lake... one said, knowledgeably to her friend: "That's the Turpentine that is."