26 27 28 29 30 year old bloke from Norwich, UK. Into online gaming, crashing motorbikes, being grumpy, belching & corpse molestation. And god dammit, I am not gay!

I'm an IT engineer Major Incident Analyst for a big insurance company *yawn*, but it does mean I get to browse the web and drink coffee a lot :)

You can drop me a line at: woodwolf|full-moon|com


That's me on the right. I'm very pretty. 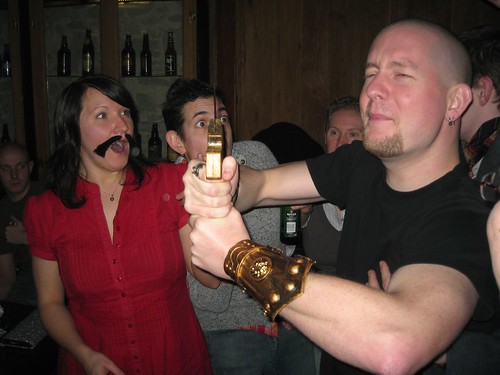 This week I have mostly been listening to:

A policeman threatened to arrest me and put me on the sex offenders register
On one angry, tequila-fuelled night I may well have ended up mooning traffic outside the pub, only for the second car to come past to illuminate my buttocks in a flashing blue light.

I'm not a huge fan of the police to start with*, and the copper that got out was, to my mind, the very worst sort - short, young and mouthy (his female partner it has to be said was actually very professional). The conversation probably started going down hill when he asked "what if that had been my granny driving down here?" and I replied "I think she'd have been quite turned on".

When I was asked for ID, the only thing I had was some mock-business cards my friend had made me for my birthday with "Gothic Sex Icon" written on them which I suspect didn't help my cause.

Anyway, to cut a short story shorter; he went on to threaten to put me on the sex offenders register which seemed a bit harsh, and ended up him telling me I had a small penis, me calling him a cunt and the female officer dragging him back to the van and the 2 of them leaving.

When I was a teenager
my mum used to teach mentally handicapped people. Unfortunately for her she managed to pick up scabies from someone in the group, and being as this is very contagious our whole household had to be treated at the same time to help prevent reinfection.

So, my mum brings this large bottle of benzyl benzoate lotion home and we're told that we need to cover our bodies with it. Leave it for a while, shower it off and do the same the next day.

Now after a bit of research I'd read that scabies could be particularly nasty in the genital areas and arm pits. So amred with this knowledge I proceded to apply ample amounts of this cool white lotion to my body, making sure that my groin and pits get sufficient attention.

Within 5 minutes I feel like someone is holding a blow-torch to my bollocks. I filled the sink with cold water and dangled my nuts in it while I could but was soon overwhelmed by the pain and collapsed in a foetal whimpering mass on the floor.

I have broken and crushed dozens of bones in the past but I would still rank this as one of the most painful experiences of my life :(
(Fri 14th Jul 2006, 12:09, More)

Adoption
One of my best mates repeatedly calls me fat (mainly cos he's an 8 stone streak of piss). He's also adopted.