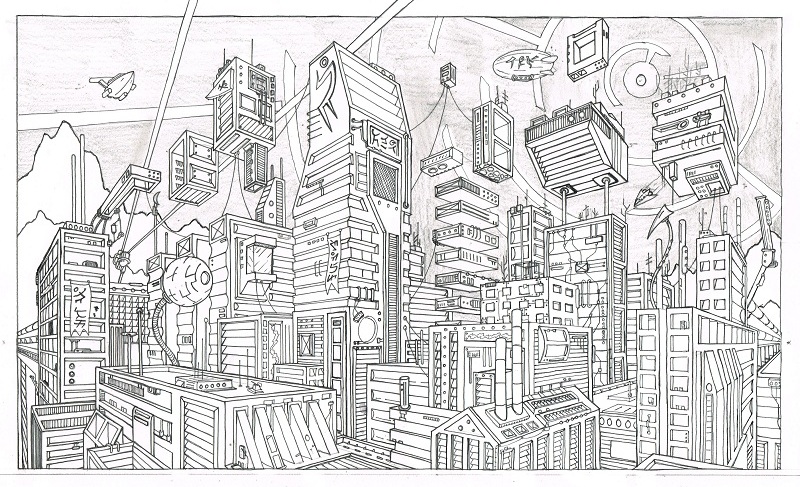 I was zombified by Happytoast The beast_with_two_backs made me this I was vectored by rappola

The magnificent Valin did this The Fiend made me this

two days in a row for this and this.

My Christmas Adventure!
Last Christmas, I went skiing with my family in Banff, Canada, where I was fortunate enough to have a REAL GENUINE CHRISTMAS ADVENTURE.

It was Christmas eve, and I was skiing on my own without a pre-planned route. Opting to take a piste marked 'To Base Station,' I found myself on a very long, thin and flat winding path which, as time went by, started to look more and more like an actual road. After 10 minutes of skiing I glided into a car park. Aside from a handful of empty vehicles and a painfully useless map of the Canadian wilderness, there was no sign of the base station I had intended on reaching. The path back up the mountain was extremely long, (not to mention steep), and the only other means of escape was a snow-covered tarmac road, stretching off into the valley's thick forest. So, I took of my skis, and started walking.

It wasn't long before I encountered another human being - an American gentleman, who came skiing down the mountain behind me. After a brief exchange of words we established that we had both made the same mistake, and were equally bemused regarding the route back home. So we walked on.

Roughly ten minutes later, we saw a car at the side of the road up ahead. As we drew nearer, we saw a middle-aged woman and her young daughter, digging snow out from under the wheels. We chatted. She had pulled over to read a map, and had become stuck in the snowdrift. Naturally, I offered to help. After an annoyingly long time of digging, pushing and wheel-spinning, the vehicle was finally freed. She made an offer of a lift to myself and my travelling companion, informing us that the base station was roughly ten minutes' drive down the road in the direction we had been heading. Happy with this news, we politely declined, opting instead to put our skis back on and go cross-country for the remainder of the trip.

What the kind lady had failed to tell us was that the road slowly began to steepen up ahead. Soon we were scrabbling our way up the icy slope with our skis over our shoulders. Ten minutes of this... and then the SCARY bit happened.

We heard a grunt. An animal of some sort, in the woods to the side of the road. My companion nervously informed me that this was, in fact, the sort of territory in which wild bears were quite common. Exhausted and paranoid, we chose to stop; hiding by the snow piles at the side of the road. But then we saw something move in the trees. Something brown. And hairy. We didn't look at each other, nor did either of us make a sound, but the tension was thick in the air.

It happened quickly, but not startlingly; three wild elk strolled quietly out of the forest, crossed the road, and disappeared through the trees on the other side. After a few moments, we stood and continued our journey onward in perfect silence.

Time passed. Lots of it. And then we reached a freeway. The frustration of encountering this obstacle was plenty enough to break the silence, and as we trudged achingly slowly through the brown sludge by the barrier alongside, we exchanged semi-witty comments about the American lady's intructions. But neither of us said a single thing about the elks.

Rougly an hour and a half after taking the wrong turn back up on the piste, the base station was in sight. With a new-found quickness we entered the car park, and approached the main lodge. I turned to bid a final farewell to my companion, but - and this is the bit of the story which I believe makes it a REAL GENUINE CHRISTMAS ADVENTURE - when I turned around...

This story is 100% of fact. I will happily swear on everyone and everything that I know and love that every single word of this tale is true. And with it's haunting memories still burned into my conscious I fell asleep that night, to awake the next morning on a beautiful, snowy christmas day.

No apologies for length. I am soon to be starting a creative writing course, so this is all good practice for me.
(Fri 8th Sep 2006, 0:40, More)

In a soapy bath full of hot sick.
I once came home drunk and tried to run myself a bath, as the shower was broken. I then fell asleep in said bath. And, as a consequence of subsequently waking up with hot soapy water in my mouth and nose, I threw up.
It was quite frankly a lovely experience and I would highly recommend it to everybody.
(Mon 1st Jan 2007, 14:02, More)

There is a joke my friend likes to tell at the pub.
'Knock knock'
'Who's there?'
'Interrupting slap'