I have worked for many years as a glorified babysitter within the Out Of Home Care sector. I get to look after kids in state-funded homes. These kids are not able to live with their parents/families either because their own behaviour makes them too dangerous for their family to look after, such as when they sexually abuse their siblings, or because their family is unable to care for them, such as when Mum and Dad get busted for pimping their kids for drug money. Occasionally we get kids who simply have no living relatives left who are able to act as guardian, but this is rare. The majority of kids we get are deeply traumatised, extremely emotionally reactive, and hypervigilant, with no impulse control. Despite having more balls and self-awareness than most adults I have met, they can't cope emotionally with the word "No." Bless -em.

They have magnificent tantrums. A coworker (J) once called me in the middle of the night, because the kid she was looking after, high on chrome (paint fumes), had smashed her way through the house with a large, nail-studded "club" she had acquired from a nearby building site. Everything in the house was smashed. windows, oven door, plasterboard walls, tv, fishtank, panels and windscreen of the work car. J had called me for a quick chat to calm herself down while she waited for her line manager and the police to arrive. The kid had, mercifully, chosen to run for it instead of taking the club to J's head. J explained that earlier that afternoon, the manager had advised the hardware shop where this kid had been scoring spray paint, that the kid was using the paint to get high, and asked the shop owner to refuse sale. When the kid had rocked up later to get some paint, the shopkeeper said "no." The kid twigged that her carers had spoken to the shopkeeper to cut off her supply, and she went back to the house and threw a tantrum. This one kid's antics were the stuff of legend within my industry for many years, and I heard a couple of years ago that she has become a well-behaved and functional adult, and a huge advocate for the rights of kids in Out Of Home Care. Quite a 180 turn.

More recently, I have had the pleasure of correcting a kid while he unleashed a stream of verbal abuse at me. He was so apoplectic, the only nouns he could muster were "faggot" and "poofter," while I believed that "bitch" and "slut" would be more gender appropriate. He smiled when I pointed this out. Then he smashed the tv.
(Mon 23rd Jul 2012, 13:17, More)

Scary worksite
In 2007 I was contracted to work as a Support Worker for a Young Adult accommodation program in the glorious Eastern Suburbs. One of my clients was housed in a 2 bedroom house, which was owned by the state community services department, but was leased to a private, church-inspired organisation. My job was to hang out at this house, in the staff quarters, and wait for the adult client to come home with her "johns." (She was a former state ward, with an intellectual disability which limited her capacity to look after herself independently, hence the need for a support worker). She would have some company, and a bit of extra income, and we would document what he looked like, and whether he murdered us or not.

She wouldn't come home often - there were weeks where none of the staff had contact with her. It was weeks before I first met her. She hated the house, and so did the staff. Due to the "flexibility" within the Employment Award, I would be rostered on duty at this house for maybe four 24-hour blocks in a row. I might start at 3pm Monday, and not clock off (and go back to my own place) until 3pm Thursday. We were allowed 2 hours each day to leave the house, to buy food, or have a "break." Staff were rostered on alone, because it was a "one-on-one" placement, presuming that the staff would have the opportunity to develop quality, therapeutic relationships with the client, because there was only one client for staff to worry about.

This house had several large trees around it, but there were never any possums, which in hindsight I thought was weird, because every house in this city has possums, even in the CBD. I live in a block of hipster flats, so everyone encourages them onto the balcony with slices of organic, fair-trade fruit, and decaf soy lattes. They make a loud coughing noise, like old men with emphysema, and they fight on my roof. And shit on my car. They are the true "rats of the sky." This worksite, however, had nothing. Not even sparrows. The staff quarters were a bedroom, with a desk, and an ensuite. If you kept the windows open all year round, the stench of Glade Plugin teargas and body odour were bearable. The walls in the staff bedroom had staples all over them.

One evening, I was sitting at the desk, reading a book because of no internets. :( I was the only person in the house. For someone to be there with me, they would have to come in through the door, or through the skylight in the kitchen, because the windows had security bars on them. I heard a very angry, scratchy voice shout "Bitch" in my right ear. As if there was someone standing behind me. Scared me shitless. I didn't sleep at all that night. I didn't mention it to the next person on shift, even though we were pretty good friends, because I didn't want her to think I was nutty.

This co-worker phoned me one afternoon, several weeks later. She sounded really rattled, and I assumed it was because something had happened with the client, or one of her gentlemen callers, but no. My co-worker told me that she had been sitting on the bed with her laptop. She didn't have any music or sound playing, because it was necessary for us to hear if the client tried to sneak in through the skylight. She told me that she heard this really loud, horrible scream in her ear, as if someone was standing next to her. She was completely alone in the house, and was completely freaked out. I told her about the voice I'd heard. Somehow she calmed down enough to finish her three day block.

That house gave everyone on the team really bad vibes. We worked at a lot of sites where we were alone for days at a time, and none of us were freaked out at those sites in the way we were at this house. One of the staff attempted to "spiritually cleanse" the staff quarters, by burning sage and reciting prayers, but everyone still felt weird being in there. Several months after our contract to that property was finished, we were told by a manager that several years ago, the department placed a client in the house, with the client's bedroom being what was now the staff quarters. He'd had schizophrenia, which wasn't very well controlled with medication. He had stapled foiled all over the walls of his bedroom to stop people (aliens, government) reading his thoughts. Understandably, he had been very angry and miserable during his time there, and had eventually hanged himself in the ensuite.
(Sun 16th Sep 2012, 14:45, More)

Vale Fluffy
I was slow to the whole First Car thing, mainly because I'd been driving on a farm since I was 9 which diminished the novelty, and because my Dad was adamant that I didn't need a car if I moved to a flat near Uni. Which was great if the only place I ever needed to go was Uni, but less great if I had to go into town to buy groceries, or go to work. I'm amazed that I managed with irregular buses and shanks pony until I was 22.

My patience and stupidity gave me the chance to save up for my first car, a 1996 Hyundai Excel, for which I paid the gargantuan sum of $6000 AUD. She was all tinted windows and no aircon. I was now able to travel halfway across the state to visit my parents, and make the occasional adventure to Melbourne, which was AMAAH-ZING! I even drove to Wagga Wagga once, just because I could. I was young, single, and unencumbered, and driving was still fun.

And then Fluffy, for that was my car's name, met her tragic and violent demise. On the freeway, doing 110km, heading home from Melbourne in 2006, I was overtaken by a B Double. I'm not sure what happened - either the truck clipped my car as it pulled out, or one of my rear tires popped. Fluffy surged forward, her gearbox screaming that fifth gear was not sufficiently fast enough to match the speed of her wheels. I instinctively braked and she fishtailed, sailing back and forth across both lanes, before sliding of the left side of the road, through an electric fence, and down into a paddock. She rolled three times before she stopped moving.

Four vehicles pulled up on the side of the road to check how dead I was, for which I am immensely grateful. I was hanging upside down in my seatbelt, and the weight of my body meant that the clip couldn't detach from the socket. A very stunned truckie had to reach in and unclip me. He then poured his water bottle over the engine to try and cool it down so that the dry grass didn't catch on fire. Another couple called me an ambulance. I asked the truckie if we could roll the car back onto its wheels, because I had 2 hours of driving left to get home, and I had work in the morning. He didn't realise how serious I was, thank god.

I had a tiny scratch on my right neck, from the seatbelt, and a tiny hole in my good slacks, where they caught on the underside of the dash while I was hanging upside down. I should have been thoroughly dead, or at least very badly injured.

I have a photo of poor Fluffy after the accident, but I don't know how to append it to this post. 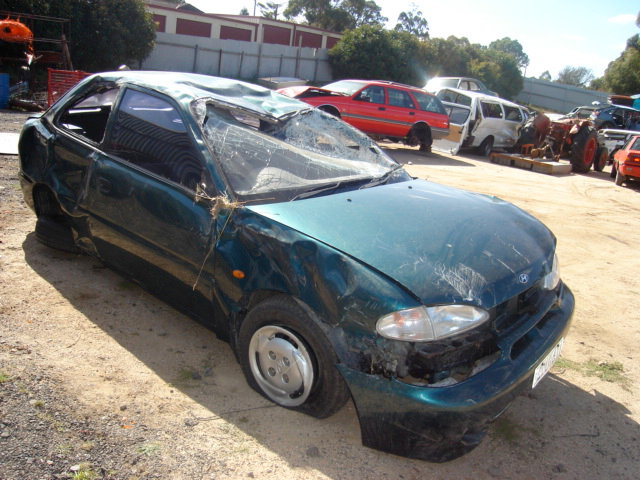 Pet Stories
My cat Boodle would suck the tip of her tail like a dummy when she was a kitten. Rather loud slurping, even in her sleep. It was quite disappointing when she grew out of it, although occassionally when in a deep sleep, she will just make slurping noises sans tail.

She used to catch birds from time to time at our old place in the country. If she wanted them for herself, she's run in behind the toilet and eat them. If they were for me, she'd leave them on the kitchen floor and strut around looking very pleased with herself. And not just birds. She once "shared" some kids ham and cheese jaffle with me, leaving the cheese and crust on the floor for me after she'd gobbled down the ham. And one Australia Day she brought home cocktail franks and left me some with bites taken out of them. Same weekend she brought me a deflated balloon - it must have seemed alive because there was enough air in it to be squishy between her jaws. She left it for me in the kitchen - latex tastes horrible.

She LOVES individually wrapped sanitary pads. When she bites them, the air being squeezed out of the little packets sounds like it's breathing. I have to hide them.
(Thu 14th Jun 2007, 13:44, More)