This is the Big Merino, the best concrete sheep in the world, ever. 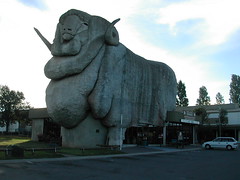 This is also me. 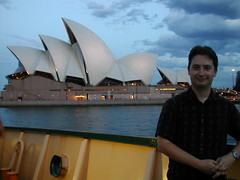 I've recently moved to Sydney. There are lots of cockatoos here. 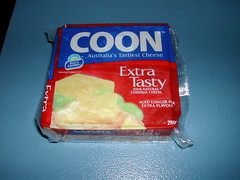 There's a pool of absinthe on the roof of my apartment building. 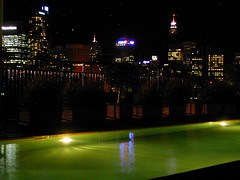 I've got a flickr account here, though it's not very exciting, apart from the scotch ostrich egg I made, following Fraser Lewry's example. 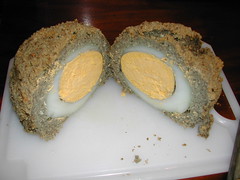 The rest of my profile (below the line) is b0rked at moment, I'll fix it eventually.

I have a webpage, but it's pretty much entirely work-related and therefore rather dull. If that hasn't completely put you off you can still clicky, I suppose.

The first thing I did for b3ta:

A few more recent things, which I hope show some signs of improvement:

A bream dream of cream on a beam in Cheam (no seam).

Floating gurning baby. And why not?

Mind bleach applicator, or something.

The condom fairy. Story here, in an old QoTW.

There were fireworks...
Literally. Most of the story isn't particularly exceptional, we were both 16, been seeing each other for a couple of weeks or so, did the deed in the living room one night when my parents and brother were out. However, almost immediately afterwards, while still glowing, grinning and cuddling (as you do) we heard some bangs from outside... I pull the curtains slightly open and peer out to discover that a fairly large and spectacular fireworks display was starting up somewhere in the neighbourhood. Watching that together was a rather nice finishing touch :-) Never did find out what the fireworks were actually for, so I can still pretend they were purely to mark the occasion...

Somewhat related, and kind of funny, were my visitations around this time from the condom fairy. Shortly after starting to see my first girlfriend I was surprised to find that a 3-pack of condoms had mysteriously appeared in one of the drawers in my bedroom. The condom fairy wasn't finished there though, a week or two later, having noticed that I'd taken the first three, the fairy returned, and having decided that it had underestimated my appetites left me a 12-pack to replace it... :-)
(Thu 3rd Mar 2005, 17:48, More)

3000 quid santa hat
About 3 or so years back I was out in Cambridge with a group from the work Christmas 'do'. While moving from one bar/club that has just closed to another I was briefly separated from the others. It was while I was walking along by myself, resplendent in a fine santa hat (only a few booze stains), that one of a group of three young chavs heading the opposite way grabbed my lovely hat from my head. In my somewhat drunken state I didn't do the sensible thing and just let them have it, I tried to grab it back off his head (and missed). His response was to swing a fist at the side of my head (he didn't miss). Next thing I remember is coming round and looking up at the ambulancemen and policemen standing round me. I had a broken right arm so not a nice way to start off the Christmas holiday for me, but the hat they pinched turned out to be very pricey for the chavs. The fuckwits had beaten me up right in front of a CCTV camera, two of the three were arrested that night while I was still being X-rayed and the third was picked up the following day. In the end in addition to community service type things two of them had to pay me 1500 quid in compensation each. So between them they were 3000 quid out of pocket with only a second hand santa hat to show for it...

Seems I still haven't learnt my lesson about cooperating with muggers though. Last December in my new home of Sydney I was walking back from the pub through a pretty deserted part of town when I get jumped by two hoodie wearing bastards. So when I'm lying on the ground with an angry looking bloke sitting on my chest, waving a fucking huge kitchen knife in my face and demanding my wallet, what do I do? Of course, like the muppet I am I say 'no'. This seemed to annoy him for some reason, but while I don't clearly remember what happened next I must have done a decent job of fending off the knife (got the scars on my palms to prove it) as he only managed to cut my ear lobe open before they decided to leg it. Sadly there were no arrests this time, and to add insult to injury I later get a bill from the ambulance service (the 'comprehensive' public health service in Australia provides free emergency treatment but you've got to pay to get to it).
(Fri 16th Jun 2006, 8:07, More)