I used to be in a band you know.

But my bandmates wanted to pursue careers in finance and the private sector or something so now I'm one of them solo artists.

I am 50% of the Award winning Liquid Inspiration Podcast the other 50% being fellow B3tan Mr Bromley Daz. On our show we enjoy drinking vast quantities of beer, eating spicy curries and giving out Awesome® Awards to people we think are awesome! 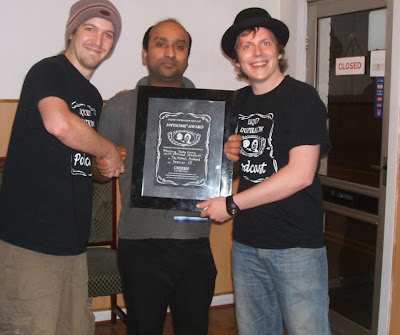 You are more than welcome to have a beer via the interwebs with us at:
www.liquidinspirationpodcast.com or: on the Twitter or even on the iTunes if you are that way inclined.
I also enjoy eating pies, wearing my festival beanie in hot foreign lands and shouting inexplicably at fromage frais in Asda.

I love you bye.

During my student days
spent being a little less whistful than everybody else in Cambridge, I observed an art exhibition, the "main" (Artists in Cambridge do that "with fingers" quote thing alot) piece of which was a room full of cotton reels with a red fire extinguisher in the middle of it. I over heard two people having a conversation about the "significance" of the red fire extinguisher and how it created a "promenance" and in itself generated a real sense of "value" to the piece. Whilst leaving i overheard the caretaker explaining to (presumably) the owner how the "new fire extinguishers" had been delivered and how when he went back to the "main" room after his lunch he found "shit loads" of "cotton reels" everywhere, and that's "why" he'd "left" "that" "fucking" "fire" "extinguisher" "there" "you" "arty" "mincer".

ahhh 24hr tescos.
this isn't something i'm proud of but 1 out of 2 of my drinkypoo sessions end up with me polishing of the months wages inside one of those fine establishments.
Previous perchised items have been:
A disposible barbeque
£20 worth of pot noodles
A girls cardigan (i am not a girl)
A westlife album (which i have been informed i bought just to smash up in the car park.)
A whole ham hock
6 Pairs of socks
String
Flip Flops
A Yoga Video (the next day i was quoted as saying "in the absence of porn blah blah blah...")
A childs remote controlled car
Severall gallons of economy orange juice (which i hate)
And one of those lighters for gas kitchen hobs (even though my kitchen hobs are electric)

I held him in my hands....
After years of a fully functional relationship he just lay there, bleeding in my lap, the sex was always fantastic and he never complained even if i was a bit smelly. Poor richard was dead, hardly suprising as i had been physically abusing him for years when that night he.....*sniff sob*....he...... fell off.

I once ran into
a badly placed bollard, smashing my nuts up good and proper. while tearfully lying on the floor a group of lads came around the corner engrossed in a game of 30-a-side football.
I got to my feet and attempted to leave. Needless to say someone scored a goal and subsequently smacked me right in the gonads.
The lad in question came running over to me not to ask if i was ok....no no to laugh and point....i look back on that day as a golden age where as a man you could cry like a girl and bitch slap 15yr olds & run away (well he did point & laugh.).
(Thu 16th Jun 2005, 9:07, More)