Hi, I'm a Maya 3D animator, web designer and Graphic artist and I live in New Zealand. I like Python, Wallace and Gromit, Calvin and Hobbes and most other aspects of our pop trash culture.

I occasionally contribute weird stuff to a few other Photoshop websites.

You can see more of my Photoshopped imagery here. 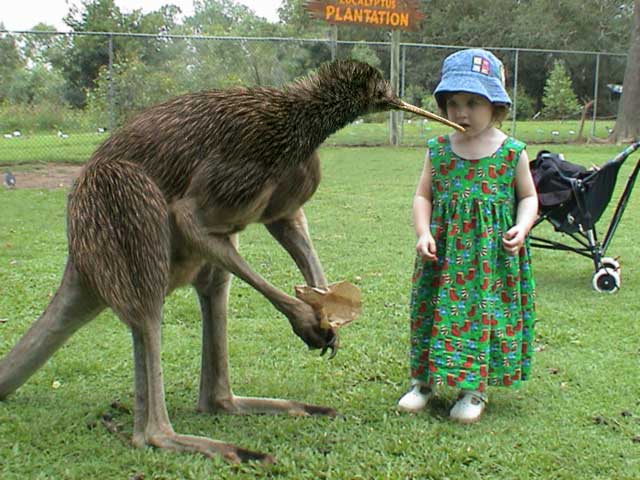 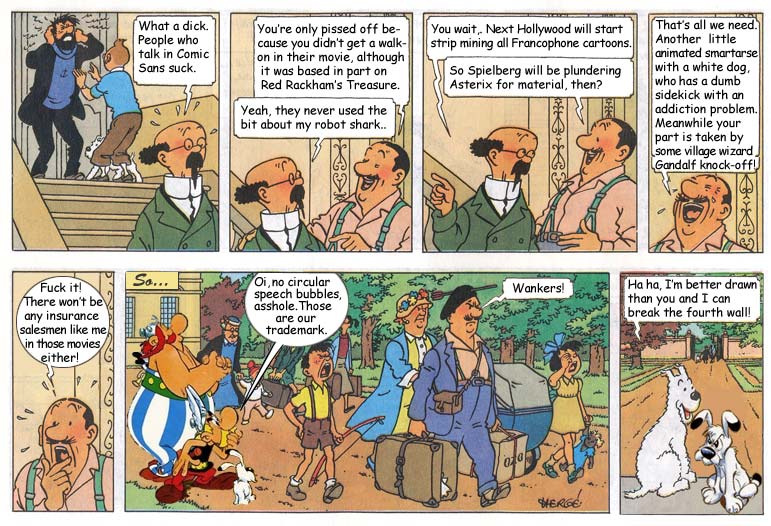 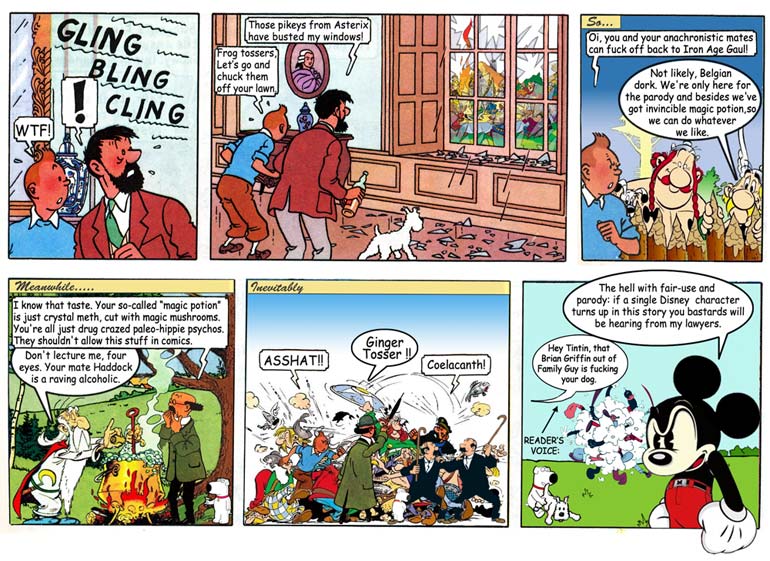 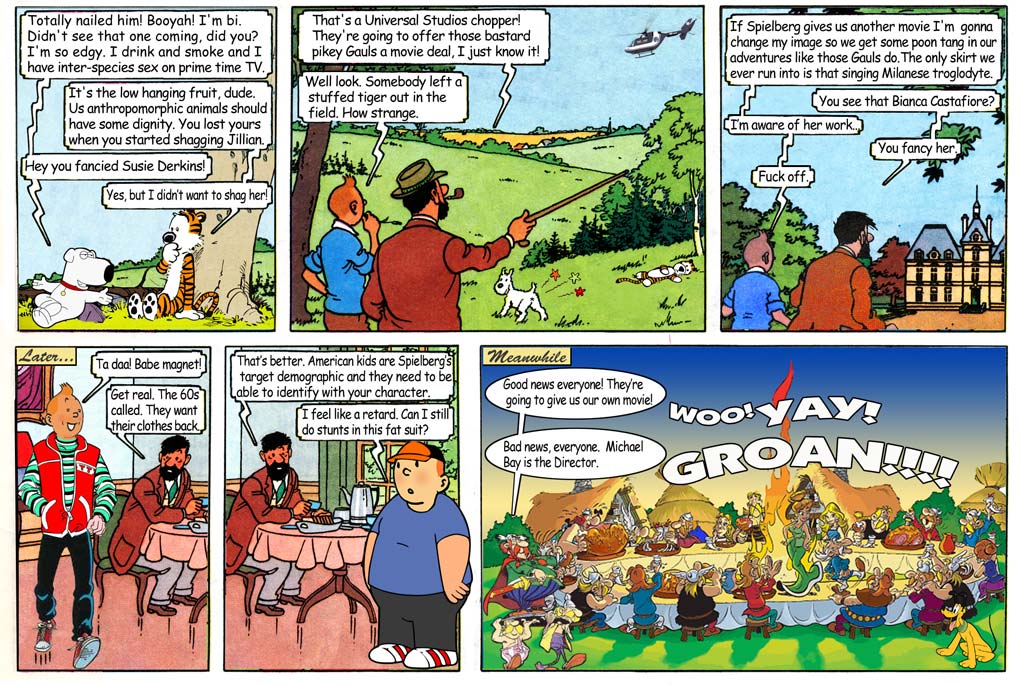 Your suffering will be legendary, even in Toy Barn. "Wisdom of the Ancients" my arse. Keep the budget down: Use CGI instead of real actors! Fun with fluorescent paint
Many years ago I stood on my mate Mick's shoulders one night and neatly painted "FUCK" in meter high white chemo fluorescent paint letters, high up on the unblemished white wall of Plimmer's Steps in my old hometown of Wellington, New Zealand.
Then for good measure I hopped down and wrote "Fuck" again in black biro a few more times at eye level on the same white wall.
Naturally outraged nocturnal users of this busy inner city thoroughfare complained frequently to the city council and local newspapers about this luminous desecration, and on my way to work I frequently observed grouchy looking council workmen obediently painting over my eye level graffiti, along with the other inevitable felt-tip epithets that sullied their pristine white wall.
...at eyelevel. Being white-on-white my far grander effort further up the wall went unnoticed by the council workers and their taskmasters, who only worked during daylight hours, and therefore never bathed in its ghostly night time glow. The council kept getting an undiminished stream of complaints about my vandalism, and I kept adding to their misery by dropping by and adding a few more red herring black biro "fucks" every time they painted over the wall - always at eye level.
They were completely baffled. Why was there such a big fuss over a few tiny swear words in biro? It took two years and a swimming pool full of white paint before they finally cottoned on.

I like to think that this subliminal swearword served as the inspiration for John Carpenter's 1988 cult sci-fi classic movie "They Live,” but it probably wasn't.
(Mon 11th Oct 2010, 11:44, More)

The 1998 TV3 weather fiasco: Disey saves the day.
The phone rang in Graphics, and it was Dianne calling me from downstairs in the TV3 program control room.
“Hey AJ, the weather’s gone.”
It was one of those telescoping pull-focus horrorshow moments like when Paul Scheider first sees that shark in Jaws.
“Oh shit, I just overwrote it with the Nightline weather!”
FUCK! It was 6.52 on a quiet Friday evening at TV3 and we were in the last commercial break before the weather bulletin. After the Friday bulletin the News Department always shouted Heinekens, wine and nibbles for the Friday evening crew, so, being on the Nightline late shift skeleton crew, I thought I’d be really efficient, save time and generate the late weather while the 6 o’clock went to air, then go kick back with a few brewskis in the newsroom.
Except that I’d forgotten which commercial break we were in, jumped the gun and overwritten the 6 o’clock weather still frames with the Nightline weather stills. Totally different ball game.
FUCK!
“Is there a problem, graphics?” I heard the news director ask, noticing Di’s sudden flurry of activity further down the console as she attempted to test the weather playback.
It was standard practice for graphics to monitor the control room comms during the bulletin. The director was an incompetent prick, one of those assholes who tries to bury his own mistakes by distributing the blame for them across as many departments as possible, in the hope that his signal would get lost in the noise.
Therefore Di hated him every last little bit as much as I did.

However just as history books are written by the victors in any war, TV station Fault Logs are written by the News Director. And this fiasco was a career breaker. And I was the department newbie.
Suddenly I had a flash.
“I can fix this. Tell him it’s OK!”
“No problem. It’s OK,” I heard Di’s icy reply to the director over the comms.
“What are you going to do?” she half-whispered into the phone.
“Praise God, I didn’t delete the 6 o’clock source files. I can re-copy them back down to your machine while we’re still in the break.”
“...In three minutes?”
“No, we’ve got about 6. I can still keep writing to your machine while we’re on-air as long as you’re not trying to read the same still frame that I’m writing.”
“…And if Rose doesn’t read too fast off the autocue and catch up. Go! Go then! Go!”

16 still frames, each with a 5 digit file name, and I would have to do it all manually. Using the auto routine would just re-dump the Nightline weather again now.
Run across the room, crank up the sleeping weather computer, load the first still frame onto the router, back over to the still frame store, grab the still, dump it to Di’s program control room computer. And again, all in exact sequence, 16 times, plus the cloud loop.

Just one digit out of place and God knows what half a million unsuspecting New Zealand weather punters would have seen: a blank frame, an error message, a picture of a frog, one of my bizarre Photoshop doodles… anything. Rose the weather girl could read faster than I could dump stills, and by the time I hit “save” on the last still it was a dead heat, and when I glanced up at the program line monitor as that last frame went to air I had no more idea what she would see there than she did, or Di.

YES! Off air! Nailed it, with literally milliseconds to spare! 12 years later and I still hyperventilate and my heart races when I think about it.

Downstairs, cool as a cucumber, Di put the presentation computers on standby and casually strolled back up to Graphics. By the time she got upstairs I was shaking like a leaf and the still frame store buttons were slick with sweat.

She didn’t get mad, she didn’t say anything. She waited until my normal hair colour returned and my pulse slowed and then we went out into the newsroom and drank beers with the news crew as if nothing had happened, because it hadn’t. Although the Director had his suspicions and the Producer (who sat next to graphics) was certain that something was up when Di spent the whole weather break whispering on the phone, because that never happens.

I quit TV3 on `04 but Di still works there part time and we are friends to this very day. If she hadn’t trusted me to fix the weather in that split second, both of our asses would have been well and truly in the fire, so if you’re reading this Disey, thanks again for saving my ass, I will never forget that.
You rock!!
(Mon 31st Jan 2011, 7:42, More)

Small man's disease
1995. We lived on Ponsonby Rd. in Auckland, New Zealand: a bit like living in inner city London parking-wise. Inconsiderate assholes parking across our clearly marked driveway were a weekly occurrence. One Saturday morning I need to get my car out but there is a brand new cream Mercedes SEL two door across the driveway. By this stage I had "If you park here again I will flatten all of your fucking tires, OK?" flyers all printed up and ready to go.

I was putting one under his wiper when the expensively dressed shortass prick of an owner comes back, with his exotic and expensive looking girlfriend in tow. I'd seen them several times before, they were lunchtime regulars at a posh restaurant across the road.
He launches into a "Don't you know who I am you bastard, I'll park wherever I fucking like," tirade, and then starts threatening me while carrying on a steady stream of expletive filled invective. He didn't actually do anything about it though, as I was quite a bit bigger than him.
His unimpressed girlfriend had meanwhile got in the car, so I decided on a different strategy. Ignoring him I walked round to her side of the car and motioned for her to wind the window down, which she did.

"See how this pompous little prick is treating me, even when he knows he's in the wrong? Six months from now, this is exactly how he'll be treating you," I told her. He shut up in mid-sentence, suddenly not sure what to do next.

"Stay here as long as you like. I'm just going inside to get a baseball bat," I told him, and walked off. He was gone a minute later when I came back with the bat.
I saw him several times after that, but I never saw him with the exotic girlfriend ever again, and I never found out who he was.
(Sat 26th Jan 2013, 7:25, More)

Jessica is fresh out of the looney bin, recuperating with family in a country farmhouse. Then weird, creepy stuff starts happening. Is it real, or is it all in her head? We never really find out, and that's what makes the film work so well.
One day Jessica takes a swim in the lake nearby. She feels something touch her foot, ducks beneath the surface and to her horror sees a kelp forest of blue naked eyeless corpses, swaying in the current, their arms reaching up to drag her under....

Switch to close-up on the corpses' POV and we see Jessica's legs thrashing on the surface, just within arms' length. Truly malevolent. Better than the shark POV scene in Jaws.

Oh, and Return of the Living Dead, for a bit of scary light relief and Linnea Quigley's tits.