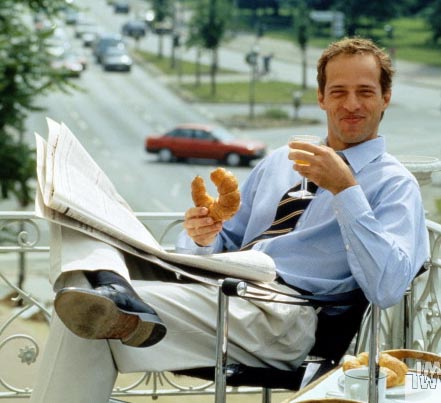 Please feel free to look around, and help yourselves to wine and croissants, but DON'T STEAL THE SPOONS!

Once you have overstayed your welcome, come with me to the art gallery

LGA
I was over in New York Last week, staying with my sister Sophie and her family. On the Thursday, whilst her and her American husband were out at work, I agreed to look after their two kids (my neice and nephew) Brad and Mary-Jo (could they have given them any more bloody American sounding names?). Anyway I took them out down to the river where they did what 2 and 4 years olds do - fed the ducks, fell in the dirt, ate the dirt, needed the toilet when there was none near etc - generally had a good time. Towards the middle of the afternoon, they were busy chasing the ducks on the green. They were totally rubbish at it, so I though I would join in and show them how it should be done. I got us all to form a circle (well actually a triangle) around a big flock of geese and then we charged in together. Those birds crapped themselves, and all flew up in the air at once in a huge mass. Mary-Jo looked delighted, she tried to tell me something, but I couldn't make it out because just at that moment a dirty great noisy aeroplane flew overhead. Sometimes we forget the joys of harmless fun, playing with kids in the park...
(Tue 20th Jan 2009, 12:49, More)

One dark night...
Nine years I spent as a traffic officer and I guess I could fill this QotW with various stories, some humourous, and some, not so bloody funny at all.

Probably the wierdest thing happened one night back in the early nineties. I had had a shitty evening, called out to a sweaty armpit of a biker's pool hall were there had been a minor fracas. It had been the usual Friday night nonsense and I had wasted a couple of hours taking down statements from various injured bikers, all of whom claimed to have been the 'innocent' victims of an 'unprovoked' attack by an, of course, 'unknown' assailant who funnily enough had since 'disappeared'. So I was not in a good mood later that evening when the rest of this tale occurrs.

I was driving through the crap bit of town - your typical post industrial urban wasteland cliche seen in a squillion hollywood movies- abandoned factories and demolished empty lots, the hang-out of vandals and drug addicts. The kind of place no-one normal goes to but the police have to patrol.

I saw some unusual sparking and flashing lights a bit back from the road, so stopped the car and got out to investigate. Some vandal had obviously been cutting through the chain link fence of an empty lot, but not with ordinary wire cutters. Oh no, it appeared that this guy had been using a blow torch or similar, as the wires round the edges of the hole were still glowing hot. I couldn't see anyone around, then I heard a noise, and suddenly I had been stabbed dead by a shining blade and a shape shifting robot had stolen my image in an attempt to destroy the human race and engineer world domination of the machines. Fucksocks.
(Tue 10th May 2011, 9:11, More)

Communal Living
I was born and brought up in a commune, and let me tell you, there were some seriously strange people there. I wasn't allowed out to school, but had to stay and work for the commune, so it was only much later that I realised quite how strange my situation was. There was one woman (let's call her Liz) who had somehow managed to get herself into position as the 'boss' of the commune. She was big and fat. No, she was huge. She had never been formally chosen as the leader, but she was so charismatic and manipulative that somehow she could always get anyone to do whatever she wanted. She didn't do any work (all the rest of us had to), we had to prepare all her meals and clear up after her. She even made a rule that everyone in the commune would practice celibacy (except for her of course). Everyone was totally under her power. You don't realize it at the time, but living in a place like that can totally destroy your spirit. It was a huge effort for me to leave, but at last I have, and now I'm working hard at making a new life for myself without that controlling influence. The only thing I really miss is the honey.
(Fri 27th Feb 2009, 16:28, More)

RX35 Switch
I work in IT support for the military, so if you read any further I will have to kill you.

A few years ago I was stationed on a large warship.

Now, you might expect IT security on the shipwide control system to be pretty tight, and indeed the firewalls to prevent external attacks are very secure (you don't really want some geek with a wireless laptop hacking in and controlling the ship lol), but if someone can actually get onto the ship, there are network ports all over which they can plug into and gain access to the whole control path.

One time when the ship pulled in a small vessel which was suspected of smuggling, the shit-for-brains marines failed to search it properly and a handful of ne'erdowells then sneaked aboard, plugged into the network, and proceded to arse around inside it. As well as mucking about with the data on the brig, thay also managed to blow a fuse on the waste control circuits, which meant I had to take a trip out all the way to home base to get a replacement RX35 switch from central stores.

As it turns out this was quite a lucky break, because while I was away this same bunch of chancers blew the whole ship up by firing some proton torpedos down the main reactor exhaust pipe.

The School
My school was great. I never knew my parents, so school was the first place I really felt like I belonged. It was one of those 'modern' type of schools with not much structure to the day. The emphasis was always on sticking together and looking out for each other, rather than academic achievement. We never did much work, in fact I can't even remember any of the teachers - it was just halcyon days of playing with my mates and going wherever we wanted in the big wide world. Until one day we all got eaten by a big whale. Bloody mammals.
(Wed 4th Feb 2009, 13:49, More)