My famous 'most hippos in a single thread'
This hit the newsletter!

Musician these days. Playing fiddle most of the time.

email abuse or anything else
madtom AT brocross DOT com


This is why they're top secret 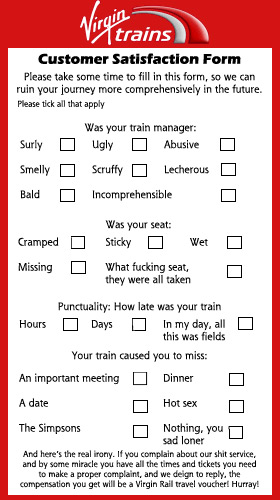 This was better in my head

This was meant to be my 5000th post epic
but my server broke and broke the board,
and I had to delete it swiftly.
I'll try again via msn groups and cross my fingers.
Hurray 5039 posts!


Nora shouldn't have tried
to suck all those lemons at once I'm not sure if this is an offence, as we were all willing...
In my first year at uni, I lived in halls. My hall was a rather nice old building, with 3 floors of quite distinct self contained corridors, each having 9 residents of various genders. Each corridor therefore attained a kind of group feeling, and most chose to have some sort of social event, such as a corridor meal, or corridor bowling night, film night etc.

What did my corridor unanimously decide to have after a water butt of alcohol? A corridor shower. And those cubicles aren't big...

We were thereafter seen as the corridor that had the shower, and nervously shunned by the rest of the halls...

I'm a fiddle player.
About three St Patrick's days ago, myself and 5 friends were asked to go and play some music for an afternoon in a pub in Leek. No money involved, but we'd get some sandwiches and all the ale we could drink, which being a brewery tap, was a good deal. We got there about lunch time and started to play. And drink. Now you'd have thought that landlords would have worked out the dangers of paying musicians in alcohol, but clearly not. By 5pm, we were playing considerably faster and more erratically than we had, and had collectively notched up 120 pints. Remember, there's 6 of us, and by this point, in our sozzled heads, we are the finest Irish band ever to have graced the earth.

The landlord tries to buy us off. We're having none of it, and demand our free beer continue. By this point, the evening is approaching and what was meant to be two hours light music in the afternoon is threatening to become a drunken musical nightmare for the pub, spilling into the entire night. He tries reasoning with us, before getting more forceful. We, in turn, are clinging onto the concept of limitless free beer for music with dogged determination. Eventually he tries to confiscate our instruments. I remember trying to stand up and falling off a chair across a table of innocent bystanders and their drinks at this point, before being bundled out the back of the pub and into the car park.

The next bit is a bit hazy, but we had to create a distraction round the front whilst we salvaged our instruments. Using a phone, we'd somehow managed to persuade one of our friends to turn up with a van at the back of the pub just as the raiding party legged it back out with our instruments, before screeching off into the countryside, proud as punch at our adventures.

Next day it occured to some of us that we hadn't necessarily been the wrongful victims of a terrible misjustice, and that two of us had probably better not live in Leek much longer.

I was playing for an 80th birthday party a week ago
in Denton Conservative club. I was the fiddle player in a rather silly jug band. The party was held for the chairman of the local Conservative association, so the great and the good of the local Tory scene were present and conspicuously enjoying their Gin and Tonics. If you've ever been to a Conservative club, you'll know that they all have a picture of the Queen hanging over the bar, resplendent in all her regal majesty. It'd been going rather well till the point where our singer points to it and says 'Nice picture, but remember, when she dies, we all move up a place'

Airports. I've been to a few
I've been frisked by men with automatic weapons at Dubai, after setting all the alarms in the world off, but my best ariport story is surely one from about 7 years ago in Iceland.

I'd gone out there on a week's holiday to see the volcanos, and being 15 at the time, and this being my first real trip overseas, was having a right old adventure. Part of the trip involved a visit to the Westman islands, or Vestmannaeyjar as they're known, to see the volcano that erupted an destroyed half the town there in 1973. To get there we flew out in this teeny little light aircraft, and me being big for a 15 year old had to sit in the co-pilot's seat. When the pilot got in, I found that I had a full set of working controls infront of me, including the steery thing. Fortunately, the pilot didn't pass out so I kept my hands to myself.

The airport on the island has two runways in a cross shape, and apparently you just land when you feel like it, as our aircraft had to abort at the last second as someone was landing on the other runway and would clearly have been in our path. It was pretty scary, but the view from the back of the plane was so bad, that I was the only passenger that noticed.