Nothing to see here. I'm rather dull you see.

present to my mum from her father
my grandad died suddely of a heart attack a few years back at the fairly grand old age of 83. he was generally in good health so it came as quite a shock to my mum, so i volunteered to clear out his flat for her, sorting the stuff we wanted to keep and getting the rest of it to the charity shop. one thing i didn't give her, or even mention that i'd found, was a big box of old cine films from the 70s. I took them home, begged a projector off a mate and went through the lot. absolute gold mine that had me in floods of tears. I set about digitising the lot (don't send it off to be done, it's incredibly easy to do yourself), editing it down into two dvds, making menus and all that nonsense.

gave them to my mum for christmas - the first one was full of footage from holidays my parents had been on with her mum and dad to the isle of wight, cornwall and all that, some with me and my sister as toddlers in, all very cute, but the second was a recording of a large chunk of my parents' wedding - a recording that they had no idea even existed. can't really imagine what a shock that would be, but my folks were utterly speechless. the end of the footage is the only time where my grandad gave the camera to my nan to do a bit of filming and it fades out on him grinning warmly into the camera. even typing this is choking me up a bit.

Wheeeeeeeebleurgheee!
I once volunteered to look after my sister's 2 year old son at my house while she went out shopping for a few hours. This is before I had kids and he was the first rugrat in our family so i pretty much doted on him. We spent the afternoon watching cartoons and playing with all his cool toys (Brio is still awesome). The attention span of a 2 year old boy being what it is, he got bored of all of that so, inspired by years of being tormented in the same way by my dad, i picked him up by his ankles and swung him round the living room. Instantly this is the BEST GAME EVER. So this is what we were doing when my sister came back - my nephew spinning around the room and giggling wildly. Unfortunately he picked that exact moment to expel the contents of his stomach, painting an orangey-brown go faster stripe of vom across my sofa and a fairly long arc across my cream carpets. My sister found it hilarious, my wife less so (we ended up buying a new sofa after many failed attempts to clean it), and my nephew even less so. for about a year after this, he would occasionally point at me, looking upset and just say 'YOU made me sick.'

I now play this game with my two sons, but only in the garden. I am pleased to say that they are made of stronger stuff and neither has bubbled his carrots once.
(Thu 28th Oct 2010, 13:12, More)

lovely birds
Can’t believe I’ve only just remembered this. In my last year at junior school we had to do an art project on garden birds, the best of which would be shown in a display at the library in Bromley and the winners would get a book token. I was quite partial to a bit of drawing and sat in my garden waiting for inspiration. I saw a couple of birds with very pretty plumage on the bird table after a while so asked my dad what they were and then set about copying them (from our RSPB bird spotting book). Was very pleased with my chalk drawing of them on the bird table and duly handed it in at school to be entered into the competition. Had to give it a name, so I jotted that down on the back.

A week or so later the winners were announced. Unbelievably I’d won a prize, so my proud parents took me to the mini ceremony thing after school to see my work proudly hung on the wall. They did a bit of sniggering when they saw it, which I thought was a little rude, but didn’t think much more of it. Then the mayor of Bromley started doing the presentations, reading the kid’s name and then their piece. When it got to my turn, the penny finally dropped about what my parents thought was so funny. ‘Alphabet Soap with A Pair of Great Tits.’ There was a smattering of barely stifled laughter around the room as I went, red-faced, to collect my book token.

every night
getting home from work. i open the front door, put my bike under the stairs, pause for a bit until i hear "daddy?" from upstairs. Then there's a big clatter, my two boys run down the stairs clutching random objects (vacuum hose, pliers, coat hook, that sort of thing), knock me to the floor and attempt to tickle me. every night.

I went through three months of hell last winter
tearing my new house to pieces to make a super massive kitchen. because i like sitting in the kitchen and having a beer. I am so fucking smug about it that the cupboards are full to bursting point with croissants.

This is the view from inside the kitchen during the snow 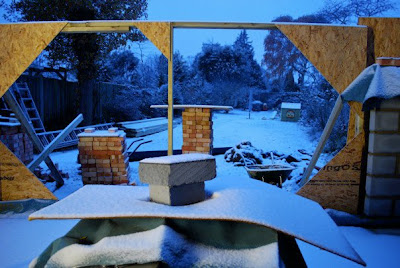 and this is it now. tonight i will have the doors open, sit on the sofa and do a bit of grinning. mainly because i'm now utterly crippled by debt and can't afford to do anything else. 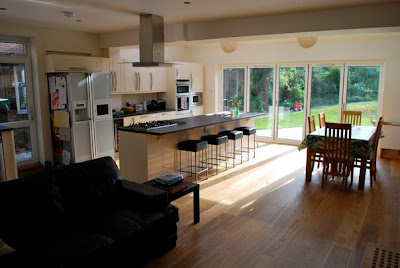