in case you're wondering about all the redexes below...tis cause i've changed hosting so the links are al dead now...shame i cant change em really. hey ho.
feel free to take a gander at my site for the latest work...plus the older stuff too ;)


it's ok, we've sent in the cavalry 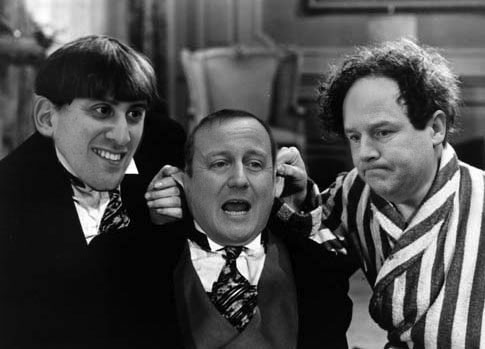 and hello again after all this time... this took far too long to do and i'm wondering why i did it in the first place. hey ho.

and such a bad pun too

they live on all the litter or so i'm told

Well the Germans were pretty surprised I can tell you!

no reason
no reason at all

my wife and i had made plans for the children to be at my folks and for us to go into town for a nice evening - just the two of us. some coctails, maybe some food. just a generally chilled night out.

first stop was reading's cafe iguana for some coctails. well 3 pints of long island ice tea and i was into party mood (ie. acting like a twat). i'd already started to hassle to 2 djs in the place ("so you like breaks? you know who i am? (as it happened they did) i'll hook you up with loads of rekkids gimme yer numbers) and was well into thinking i was still touring when a friend "arrived" (apparently i had called him) with some pills.

or a teleport machine as they turned out to be.

i remember very little of the next 6 hours. apparently the teleport device wasn;t working properly as we didn't go straight from the bar to my house as i suspected, but had stopped off at 2 local clubs and several houses of ill repute before returning to haze towers where i really came into my element.

to my mind though one minute i'm in iguana and it's 10pm the next i'm lying flat on my back in my back garden at 4am quite clearly off my swede!

apparently i'd been up to all manner of amusing antics - taking 2 hours to put some music on via the all new wireless media system at home. rolling around like some spazz to the delight of my wife and old friend and some bird we picked up along the way (apparently teleporting can do that). jumping around in the studio so much that i practicaly fractured my ankle (couldnt walk for 2 days. twas a lovely black colour).

at one point we were having a conversation about dinosaurs (!) and what omnivores ate. my reply - "well they mainly eat wooden doorhandles". hmmmm quite.
(Fri 16th Dec 2005, 11:22, More)

i used to be a bit of a bruiser when i was younger (read: before i discovered the calming effects of weed)
and as a result used to get in a fair amount of utterly pointless fisticuffs...once even with a teacher...

to cut a long story slightly shorter..i was on a school ski trip to mont geneve in france. it had been a fairly good week, though the teachers confiscating our booze and then partying with it on the last night still annoys! the buggers.

anyhoo, on the day of departure the whole group was gathered in the restaurant waiting for the coaches to come pick us up for the journey to the airport. one of my compadres decided to have a bit of fun by nicking the teacher responsible for the trips rather natty headware. several minutes of "give me my hat back" "no" exchange and the teacher decided to change tack...by taking my camera (my pride and joy slr of the time) and holding it for ransome for the hat.

this did not go down well with me and something of an argument broke out. much to the amusement of the rest of the group (about 40 pupils and teachers), who were watching. things came to a head with me physically pinning the teacher to the wall with one hand whilst getting ready to brain the fucker with the other. hmmm i remember it clearly as if it was this morning!

as it happens my dad was along on the trip (not as a teacher but as a kind of guest of the guy i had pinned to the wall!) and i can hear him quite clearly say into the now totally silent room "simon. no. a word please".

after a brief chat with my dad in the toilets it was agreed that the teacher was at fault and that i should simply go quietly outside to wait for the coaches. at this point all i was thinking was "fuck, that's me expelled regardless of the positioning of blame".

shortly after i was asked to get off the coach (sat at the back with mates discussing my education threatening moves) by the teacher i had nearly lamped. thinking "this is it" i obliged and left the bus...only to have the teacher apologise unreservedly and a commitment that here is where it stopped.

from that point onwards the word spread round the school of the mighty 5th year who had "attacked" a teacher (the then head of chemistry and deputy head of the school!) and gotten away with it! hehe
(Wed 15th Mar 2006, 16:13, More)

some years ago i got an ear infection which resulted in acute tinitus and a touch of vertigo
it just so happens that my boss also suffers from tinitus and vertigo and knows how bad it can be...well, mine kinda sorted itself out about 18months ago...i just forgot to tell them.

i lost my mind once...
it has yet to be located or returned.