About time I changed this.

*gulps tea and calms down*

..a male brain inhabiting a female body,
..a compulsive watcher of samurai bloodbath cartoons
..prone to babbling incoherent nonsense to cover total social ineptitude/fear
..becoming a virtual recluse in revenge against London. Because it smells.
..nearing the age when rock stars die..

I'm also standing quietly behind you, holding a bloodstained katana and packet of crisps. *Crunch* Want one?

All vital functions have ceased beyond stumbling about, groaning, usually for caffeine.

Life is the unwelcome intrusive bursts of confusion between sleep. Usually spent shuttling back and forth between the arctic airconditioned box of crap office-monkey employment, and a slightly bigger but just as crap overpriced box rented to sleep/hide in.

Nothing much else ever happens due to desperate attempts to save money/get out of here some day.. and general epic failure of social skills.

Theres probably a cycle of causality here, but what would I know, being braindead and thus anaesthatised to reality.

..As recompense for all this babbling incoherent nonsense, have a fluffy kitty *yoinks* 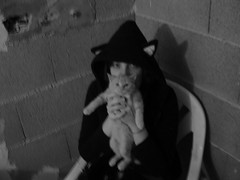 Hmm.. about time I update this with the shocking upheavals of recent existence..

As of January, declared surplus to Recession, I was cast out of my cushy (**irony) job and on the scrapheap of society, to scrounge a living via benefits, crap Lidl food and dire daytime TV.

I spend the days joyriding Tescos trolleys up and down the hill, but hide in the library when it rains (they also have Central Heating In Thaar..)


Occasionally I scramble about on the internet for jobs, but find the mediocre offerings uninspiring and dull.
With this in mind, (plus ample acreage of time to squander) I have given due consideration to a career change.

Admittedly I previously found the 9-5 grind tedious, repetitive and unrewarding.
The other office inmates were with a few exceptions amoeba-brained, Pop Idol-worshipping ignoramuses, fixated on endless diets and boring eachother to death with dissecting the dull minutiae of their groundhog day lives.

After much thought and consultation, I have settled upon the suitable calling of:

With this in mind, I have actively pursued honing and/or obtaining the conventional accoutrements of said trade:

I possess a vast, intimidating yet subtly refined genius. Its in here somewhere I’m sure.. *keeps looking*.

A suitably remote 20 bedroom mansion was “borrowed” from a reclusive billionaire, to get to grips with the lifestyle.

I attended seminars on playing with spy equipment, the correct ambience and volume for pumping death metal music through ones antique dining halls, and perfecting a maniacal laugh– possibly the most essential feature of this profession.

On Sundays, Mummy Dearest bakes me a cake, before wrapping me up warm on my trippy wippy to Oxford – recruitment of mad scientists, lab techs and general minions is required to staff the planned evil laboratory complex, MeerKattery and ice cream parlour.


CV’s may be submitted for consideration –

would be an advantage.

Big Brother addicts will be hunted down and dunked in vats of acid.

If I put Malakai on 90degree cycle, followed by a spin in the tumble dryer, maybe he’ll pass?

Ahem. The Supremely Evil One would like to point out that her Supervillainry expoits are usually limited to Evenings, Weekends and Banking Sector Meltdown holidays, and in no way inflict upon or contravene the draconian Jobsqeakers Agreement policy, that thou shalt be available for Work at all hours of Untmost Inconvenience (and in flagrant breach of the 40hrs EU Working Time directive), and be grovellingly grateful for your pittance allowance and weekly Grilling Sessions/Ritual Humiliation to justify said pittance on Pain of Being-Shouted-At-By-A-Bespectacled-Ogre-And-Made-To-Feel-Very-Small-Pitiful-Wretched-Oh-Dear-Shes-Piddled-On-The-Carpet-NEEEEEXXXT!!!!!

My scars are jumped-up feeble ingrates
cultivating a healthy attitude towards danger (running away) and hermetic lifestyle has left my skin white, unblemished, and with that fluorescent sheen that comes only from living in air-conditioned boxes under sickly yellow strip lighting.


White 1cm line on my right hand below a knuckle. One boring summer day aged about 8 I decided to _borrow_ a large Stanley knife from Dads toolbox and try carving totem poles from bits of log. Armed thusly I ran full-pelt to the garden in search of bits of dead tree to brutalise. What I got was savaged by a rosebush that somehow managed to rip my hand open while scooting past. Cue walking into kitchen, bleeding over the floor, clutching a large knife and claiming a rose thorn did it..

Forked Eyebrow. Parents claim this is from stealing scissors as a baby, then lying on stomach staring at them. Apparently I then fell forward, missing my eye by an inch, slashing my face and needing to go to hospital. Which begs the question wtf were they doing watching me lie there playing with scissors?

The intricate lattice of angry red lines extending up my arms like lacy vamp gloves are the ongoing handiwork of Ibis, the feral lynx-cat who treats hands as things to be chewed. Along with books, phones, speaker wires, other cats.. no wonder the bastards so fat.
(Tue 8th Feb 2005, 0:44, More)

Bum sledding
This fun new sport was invented on an otherwise pointless field trip.
(is there any other kind? Lets frogmarch you up a giant mountain, through peatbogs and mosquitoes, to go peer at a scratched rock near the top.. ooh look glacial striations! If you say so )

Equipment: Non-regulation footwear. I was not forking out precious beer-money on hiking boots, Doc Martens would have to do.

Result: Sliding all over the place like a flailing drunk stick insect, and falling splat on my arse every 30 seconds or so.

Observation: Ow. This is annoying. And painful.

Hypothesis: Why not stay on my arse? This is a slope, an exceedingly slippery slope. If I just push along its just like a soggy summer version of tobogganning.

It worked a little too well, as I skidded past most of the group and built up speed.. Cap'n I cannae stoooOOOOOOOppppp.......

It ended with ungracefully ploughing into a patch of dead bracken, which my lecturer helpfully informed us was prob full of ticks.

I ruined the DMs btw. *cries*

Like closing your eyes and seeing tetris blocks falling.. but with toilets.
My parents had sold up and shipped out to France, renting a shabby mouse-infested farm shed during one of the hottest summers ever.
My room was in the converted attic, which due to the stinginess of the owner had nothing insulation-wise between the rooftiles and ceiling. Result - 8am like it or not, it was get up or be roasted alive by the heat permeating down from above. We clocked it at 47C with a thermometer in there.

The heat was stifling. Swathes of old biddies across the country were dropping dead of heatstroke. I, a miserable vampiric creature of the cold sat in the coldest part of the stone barn all day and sweated. And drank gallons of water. And sweated.

Night-time, once the oven-room had cooled slightly I'd attempt to sleep. Or not, as the bastard night was almost as hot as the day and the roof still acted as a storage heater. It was humid sticky and hot. Literally like a sauna. Which meant after struggling to sleep I'd wake up shortly after with a raging thirst and/or bursting bladder.

Umm.. several times I got up as usual, stumbled bathroomwards, found toilet, performed biological function, then became aware of sheets, spreading damp patch and still being of a horizontal persuasion.

I took to sleeping downstairs on a sofa, constantly pushing cats off my head.
It was
(a) marginally cooler and
(b) not perched atop a gothic iron lightning conductor, on a hilltop, during the most mashoosively violent strobe-lightning thunderstorms with a thin layer of crappy rustic tiles and matchwood between me and frazzled crispyness. Which was having pretty much the same effect on my bladder control anyway.

EDIT: *cough* I'm sooo glad every other post on here seems to be dream-pissing or some variant thereof. Eet must be zum deeeply unconcious innate responze of ze human psyche, yah?
Add the threat of electocution zapping and Pavlov would be proud..
(Sun 26th Aug 2007, 20:20, More)