Not exactly the loudest or the most eye-catching of subversive activities.
And yes, it'll be rather wordy just the same.

I used to give away free food to poor people. See, one big problem in America (and probably a few other developed nations) is that far too often the people with the least spare cash tend to have less access to affordable fresh fruit and veg. It isn't just a problem of city living, it's also down to things like lack of actual grocery stores within travel range, the time and expense of public transportation and many other factors. While there are government programs to help, there's still the problem of lack of accessibility - so what if the government will pay for it if the closest corner shop has none and the nearest proper grocery is two hours by bus - and sometimes people don't qualify but still have need. So where's my part in all this?

I, having both free time and personal transportation to spare, decided to volunteer with our local Food Not Bombs group despite not being of the anarcho-hippie persuasion myself. Each week, I'd drive around to the different farmer's markets in the area and the farmers would donate fruits and vegetables that were maybe a little imperfect for sale but still perfectly good, or perhaps they had too much of a certain thing one week, or perhaps they didn't want to haul the unsold perishables back home. If what we had needed to be cooked right away we'd make something out of it, set up on a street corner and give it away; if it would keep, we'd load it into a wagon and walk through neighbourhoods giving it out to whoever wanted it.

Then a few of the members decided we needed to be more 'radical'. It seemed that reducing food waste and providing people with fresh, nourishing foods at no cost to them in time or money (in a country where so many people have this mindset that if you don't have something, it's because you didn't work hard enough for it and therefore don't deserve it) just wasn't good enough for them. I'll spare you the tales of dissent and infighting and cut to the part where operations dwindled down to me and one other girl doing everything from the collecting to the distribution on our own while the rest of them argued about the most effective way to make what they considered a worthwhile stand.

Here's my stand: One of the places where we took food was a day labour facility. In addition to borderline-exploitative work conditions, the place also overcharged its 'hires' for paltry meals at the jobsites. We'd take cooked food down there in the morning when the men lined up outside waiting for the place to open, or just take fruit if we didn't have anything to cook. One evening, I was walking home from work when a man on the street stopped me. I was wary at first, but he was smiling. 'I know you!' he said. 'You're one of the girls who brings us food.' He went on to say that when we came around, it was one of the only times in a day where someone made him feel like a person and not like a piece of garbage. He thanked me, asked me to thank my friend as well, and said that all the men at the facility were grateful that someone cared. I can't think of a moment when I felt more powerful against a system that made the man feel so low and gave a need for our work to fill in the first place.
(Thu 11th Nov 2010, 15:55, More)

» The nicest thing someone's ever done for me

So close!
and yet so far.

I can't have kids 'cause my heart is crap, and my sister has offered to play incubator if I ever decide my life requires a mini-me. Considering she'd be giving up both cigarettes and her five Cuban coffees a day habit to indulge me, I think that's pretty damn nice.
(Thu 2nd Oct 2008, 16:21, More)

Born three months early
I weighed in at a whopping 1 pound 13 ounces (thought it was 2 pounds 10 ounces for ages, but my mother corrected me recently -- 2:10 was my birth time), spent 2 months in the NICU and was in the top ten lowest surviving birth weights that year in the hospital where I was born.

Aside from plain old not dying, I also managed to survive with no brain damage, no debilitating neurological conditions and only asthma and a heart problem to show for it (the latter would provide me with another brush with death 17 years later), which I'm told impressed the doctors just as much as my living in the first place. The story goes that after I was whisked away from my exhausted mother's arms and secured in an incubator, the doctor popped in to warn my mother that I'd probably die before the day was out. Much to my grandmother's horror, my lovely mother told the doctor I would live and he could fuck off. In the 33 years since, her attitude toward doctors has yet to improve.
(Tue 24th Aug 2010, 2:09, More) 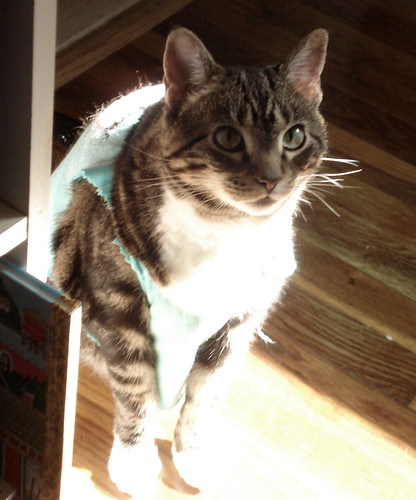 My beautiful Clare, who recently celebrated her 13th birthday and in doing so has outlived the initial prognosis given when she was diagnosed with cancer earlier this year. She's in a modified baby onesie because of the Langerhans cell histiocytosis, which is spreading, but she's still eating, playing, purring and loving. I still fall asleep with her in my arms every night and wake up with her inquisitive little face the first thing I see in the morning. Every time I look at her it's the most beautiful moment, and knowing it will go away soon is the hardest thing in the world right now.
(Thu 5th Aug 2010, 23:35, More)

Cookbooks
I collect several specific things, but nothing as passionately as cookbooks.

I have just under 800 cookbooks. My last count was 745 and that was a few months ago; with recent aquisitions, I'd put the current number at around 780.

The collection consists mainly of community cookbooks, vintage(pre-1975 only) and antique cookbooks, and handwritten recipe collections. The oldest positively-dated published book is from 1870, though there is a handwritten book that has a possible date of 1850.

The recipes themselves range from delightful to downright bizarre; among the latter are pork cake(spice cake with ground, cooked pork added), 'breakfast cookies'(like chocolate chip cookies with crumbled bacon instead of chocolate bits), acid phosphate whey('suitable for invalids') and numerous recipes for animals like squirrel, possum and raccoon.

I have cookbooks from Africa, Alaska, Australia, Lebanon, Italy, Tibet, the Netherlands, Japan, the former Yugoslavia and many other countries as well.

The pride of my collection is a recipe box whose contents span forty years in the life of one woman. Tucked inside were old cards, bits of newspaper, bills of sale and so many other things that I was able to put together a fairly detailed portrait of the woman who had created the collection. I'm tempted to make a book out of her recipes; each and every one has been a success.

The only room in our house without cookbooks is the bathroom, and if damage wasn't an issue I'd put up shelves in an instant. My husband doesn't object since I'll cook him any recipe he wants but he does admit that after I die, some research library will be getting a massive donation as he won't even begin to know what to do with them otherwise!

As to why I do it, I blame my love of history. They're a wealth of information and more often than not, a glimpse into the secret, everyday lives of women. Sometimes, recipe collections are the only evidence that these women ever existed at all, and preserving what I can of their lives is deeply important to me.

I inherited my grandmother's cookbook and recipe collection after she died, and I think part of it stems from that -- always having her with me in the recipes she wrote and the notes she made makes me want to salvage the voices of all the otherwise forgotten women in my books.
(Thu 11th Jan 2007, 20:59, More)