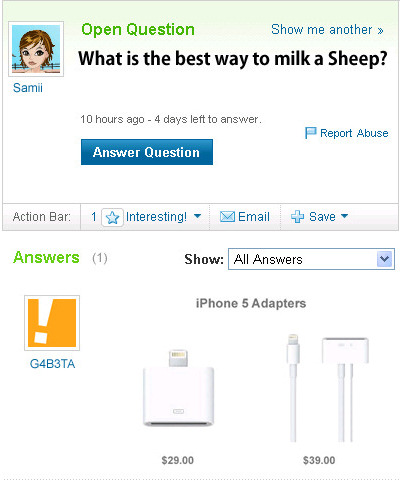 I think I need a lie down. *belms* Well he's a celebrity in my eyes.

My ex boss was a bit of a shortarse who suffered from short man syndrome.
Every year or so we'd had a staff group photo with us all lined up like good children. One particular year one of us printed it out on the colour laser printer and put it on the office notice board.

Each week we'd then photoshop our boss a few pixels shorter than everyone else and replace the previous copy. From time to time we'd notice him taking a look at the photo.

Next time you use the unisex toilet at the Airport try locking the door.
There was me, waiting for our flight from Tenerife back to pissy Manchester when I felt the all too common symptoms of my all-too-small bladder and my all-too-large booze consumption a few hours earlier.

As the flight was minutes from boarding along with the distinct absence of anyone who looked remotely disabled I decided to take advantage. Sliding the door open I was greeted by a rather alarmed looking woman who'd clearly just finished replacing her tampon or pad and had her knickers round her knees.

After a brief consideration of her smooth as glass ladygarden I turned around and scuttled off so I would not have to share the embarrasment of any further contact with the unfortunate lady.

Sods law dictated that not only was she on the same flight as me but her boyfriend was sitting next to my wife so she had no choice but to sit opposite me.

» Screwed over by The Man

Some years ago I wrote EPOS systems that were implemented in Department stores.
After a particularly stressful day preparing the final configuration for the Cash Registers whilst being hassled by the installation team I accidentally left a test configuration file in the final build.

At about midnight on a Friday night before the grand re-opening of the store I was rudely awoken by a very angry phone call from one of the installation managers.

"Why the FUCK do all the customer-facing displays say 'Would the next victim please step up?'"

Could have been worse. At least I hadn't included my test product database of such delicacies as 'Wankspanners' 'Fucknuts' and 'Monkey spunk Mopeds'
(Fri 11th May 2012, 9:07, More)

First days of IRC and the joy of Remote WAV file playing.
After a few weeks of exploring the wonders of IRC we'd set up our own channel that mutual online Ultima Online playing friends of ours would use to talk shit. One of the features of the IRC client we used was to be able to play WAV files which would simultaneously play on anyone elses PC who had the file physically on their disk too. The command was something like !play [filename.wav]

This was mostly Simpsons samples such as:

Around this time my mates girlfriend moved in with him and in a drunken conversation she let slip that in the times that he stopped typing on IRC on a Saturday morning was usually when she'd dragged him into bed for some carnal distractions.

One such morning he suddenly stopped typing for a bit longer than normal. So I siezed my chance.

- Mr_Random: "Will you fucking stop that! It just put me off my strokes as she started giggling."