I tried to recreate that hp ad thingummy. Attack of the Clone

DIY Z80 computing
I'd long wanted to put together a Z80 computer of my own design and finally got around to it last year. 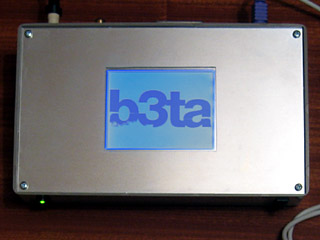 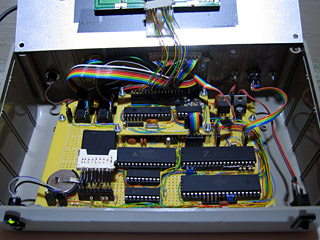 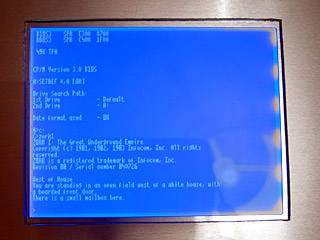 It has a 10MHz Z80 with 64KB RAM, a 320x240 pixel display (monochromatic; can be displayed on a built-in LCD, on a TV or a VGA monitor), uses a PS/2 keyboard and has a serial port for data transfer and a parallel port for printing. An SD card is used for storage. It runs CP/M 3 (you can just about make out Zork in the last photo).

The thing is, having spent a fair amount of time designing and constructing the device I haven't actually done anything with it beyond recording a dull video for YouTube...
(Sun 20th Nov 2011, 19:20, More)

WiFi(MT)
The unbranded WiFi adaptor plugged into my PC cost the princely sum of £5, and generally works pretty well. However, its casing (marked "WiFiMT") isn't very good at allowing air to circulate around its innards and in the recent weather it has a habit of overheating.

My solution is presented above: a carefully balanced stack of 20p coins on the main Realtek IC package to act as a heatsink. I haven't been disconnected from the network since. :-)

Metropolis - an amazing technical feat, given its age, and though the story is simple enough it is beautifully and majestically told. Now that they've recovered a copy of the original cut, it can only get better (a large chunk of the film had been lost).

Lost Highway - classic David Lynch, and possibly his most obviously "scary" film with the character of the Mystery Man. Told in his typically unconventional style, the film manages to evoke a wide variety of emotions, even though you'll probably need repeated viewings to really get a grip on what is going on (if there even is such thing as a definitive explanation!) Also has a cracking soundtrack.

INLAND EMPIRE - definitely the most interesting film I've seen in a cinema, this is pure, distilled Lynch. Utterly confusing, beautiful, terrifying, haunting, humourous, bizarre; this is a difficult film to sit through, but it's worth every minute.

As you can probably tell I am a bit of a David Lynch fan; I'd recommend pretty much any of his films, but also any film by David Cronenberg, Terry Gilliam, John Carpenter or Tim Burton.
(Sun 20th Jul 2008, 2:20, More)

The drummer from Status Quo
gave a lecture on drumming at my old-old school. It totally failed to burn down after he left - I guess you need the true Parfitt/Rossi combination.

Beyond that, I've shown Desmond Llewelyn (Q from the James Bond films) around that same school where he was presenting a trophy for swimming (or something).
(Tue 1st Mar 2005, 1:59, More)

I've always heard
(and still do hear) AC/DC's "Highway to Hell" as having the line:

"Hail Satan, paid my Jews, playin' in a rockin' band."