Hey.. am at university training to be a Vet.. woo!!

I don't have much time to post.. meh.. so am often found lurking whilst 'working'.. 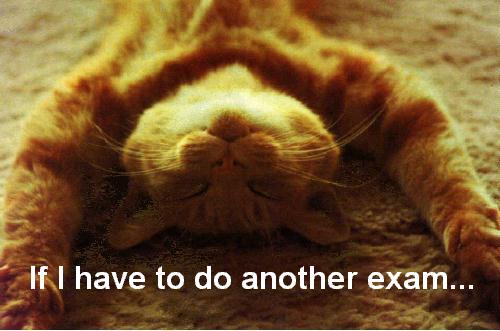 Nik Nak
There was this kid when I was at school people called 'Nik Nak'... not because he bore any resemblance to a Bond villain, but because he had some kind of deformity that meant his head was mishapen like the crisp... harsh...
(Thu 18th May 2006, 20:33, More)

I suffer from the same affliction, people who have no consideration for anyone else piss me right off, blocking the path for a chat, how hard is it to move over to the edge? Also, idiots in supermarkets who block aisles with their trolley when they could easily move it to one side, and people who park on really busy roads when there is only room for two cars creating huge queues when they could have parked on a side road 2 minutes walk away but they are too lazy to walk and instead clog up the roads.

Generally, walking/driving whatever.. people who have no consideration for others with their actions piss me off.. it doesn't take much just to think about how what you are doing might affect others..
(Mon 16th Oct 2006, 19:33, More)