The Tasker Tanning
Last year, around September, the manager of my local in Huddersfield set up a Facebook group.

"If 400 people join this group, Richard Tasker will get a spray tan"

Naturally everyone signed up, if memory serves more than 600 people swiftly joined up, which was impressive as the pub's not massive, so 600 must be about twice the establishment's legal capacity.

It is declared that Richard Tasker, legendary barman, awesome mate, and all round stand up bloke, will be having his spray tan in the pub.

The day comes at the end of October. The pub's packed out. The theme from Rocky comes on, as a little white man in a dressing gown is paraded through the pub before being taken to the DJ booth, where a spray tan machine is waiting for him. He strips off his dressing gown to reveal he is wearing a poorly fitted thong. He then recieved a spray tan, thus turning this man: 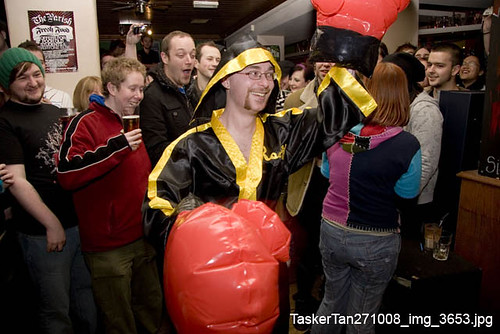 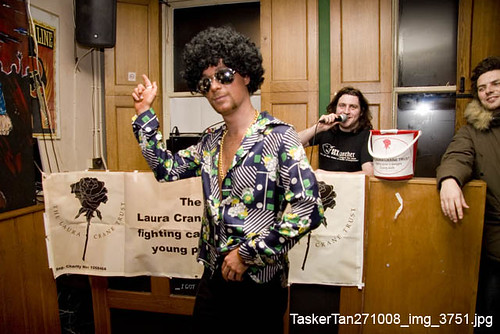 My last boss
A great guy, but he couldn't help but bend and break the truth. He used to work in computing and had his whole family believeing they were running "beta versions" of loads of software, something I also believed before one of my colleagues told me the truth. See a lot of this was about stuff that no one really has much reason to make up. As my employment continued I learned how to pick out the crap from the truth, mostly when he couldn't back anything up. However, it wasn't always that hard to figure out when lies included "I used to know Alan Sugar on a personal level", "Bill Gates used to personally take my calls" and my personal favourite: "I have two arseholes"
(Sat 1st Dec 2007, 19:40, More)

One chick, loads of guys
So my mate was having this party, and he let me and my girlfriend use his room to make out, and also to make sure no one else went in there to steal stuff/break stuff/be a general prick. So we're making out, and we can hear everything outside, and from what I could pick up (and this was later confirmed) there was a girl in the host's parents' bedroom who was pretty much offering herself to be screwed by anyone who wanted to. Bear in mind that I was either 15 or 16 at the time, which would have made the girl in question either 14 or 15.

Not so much a joke as something funny that happened the other week
A friend of mine has a hoodie that says "What about all the good things Hitler did?" across the middle on the front, with a picture of Mr. H holding a flower. He's a fuckin big bloke, so this hoodie isn't particularly baggy on him, which makes it all the easier to read, plus the logo is always bigger on larger stuff, again making it pretty easy to read. When you're wearing clothes, you don't generally think about them while you're out shopping do you? Nor did he.

Not the most pretentious, thought I'd just share it
Went to see Monster Magnet by accident last year. Their singer has a wind machine to blow his hair back. Who does that? Really? Especially in a small club like the Oxford Zodiac. Fucking arse nugget.
(Thu 29th Sep 2005, 1:33, More)