A figment of the collective imagination since 1986

They fuck me up, his mum and dad...
I'd been going out with my then boyfriend for nearly a year. Two days after both going out to Israel to start our gap year studies (about 200 metres away from each other) he calls me up and gives me the 'we need to talk' line.

My heart immediately sinks and my stomach starts to get the 'kicked in with hobnailed boots' feeling. We meet up.

He's nervous and on edge, and so am I. We get shit pizza that tastes of cardboard and then we talk. He starts saying that he thinks we should break up. I ask why. He gives me a reason that doesn't really makes sense. I tell him why it doesn't make sense. He agrees, and gives me another reason that doesn't make sense. I tell him that one doesn't really work either. He agrees, and it continues in this vein through several more reasons. I decide it's all getting a bit odd.

"Look, you keep giving me all these reasons, but none of them make any sense, they don't stand up to argument, and they don't sound like the real reasons for anything! You haven't actually told me WHY you want to break up. You haven't said anything about how you feel - if you don't think it's working, or if you don't love me, or..."

At this point he breaks down and in a sort of flood of guilt and released pressure he says that actually his parents had been nagging him for months to break up with me. Recently they'd upped the pressure and that the reasons he'd given were arguments they'd used for us breaking up, which was mainly why they were unconvincing and why he was unable to support them himself.

I was slightly shell-shocked.

It was at this point that we decided to tell his parents we'd broken up to get them off his back, but keep on going out regardless. Then realising that other people we knew also existed and would report conflicting stories to his parents, we pretended to all the English people that we'd broken up, and carried on in secret 'cloak and dagger style', abandoning the whole charade several months later and just forgetting to care about whether they knew or not.

The wedding's on the 1st of July.

Click 'I like This' if you think I should reject all attempts of his mother to try and be 'chummy' and 'my friend' and make out that she's really always on my side and just like us 'young people'.
(Sun 22nd Apr 2007, 0:51, More)

Making things is what I do
DIY, although not something I rush to do, is somewhat second nature to me. I make most things myself - I cook, invent recipes, garden, make people cards and presents (not the shit - oh, a home-made christmas card type stuff - things that are personal to you, are things you specifically like and are humorous) fix cupboards and shelves, make clothes, know how to weld large steel things etc etc.

All this leads to a certain state of mind. Like the little old lady in Goodness Gracious Me, why you need to get that when I can make it at home for free?! All I need is one smaaaall aubergine... It's not a cheapskate approach, it's just that when you know how something's done the markup on products is thrown into sharp relief. So there you are, pitched against the world and ready to make anything damnit!

So a couple of summers ago, I was at Glade festival. It was fantastic, a nice friendly place with biassed cross-section of society. There were lots of people in outlandish getups, and there were stalls where you could costume yourself similarly. It was at this point that an increasing number of chubby girls started walking past wearing those tiny, glittery, fluffy fairy wings.

I then collapsed from a punctuation overdose. The idea was lodged though. I would make fairy wings to scale, or at least as near to scale as I could. And so I did - of course they weren't actually to scale, the wire wings would've collapsed under their own weight and I wouldn't have been able to move anywhere, but they had roughly a six foot wingspan and I was satisfied. They also flapped nicely if I wiggled my shoulders back and forth.

Here I am in a cafe with them on. Spot the aubergine. 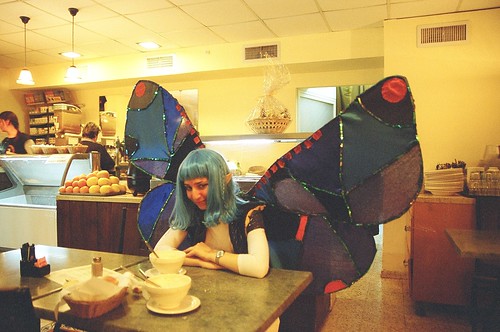 The bad shrooms
Things would often go missing from the fridge in our dorms - mostly my stuff, as I actually cooked and therefore kept myself well stocked with essentials such as milk and veg etc. I'm also allergic to everything, so had goats milk instead of normal moo milk. It'd piss me off when this mysteriously dripped away over about a day, but there was little I could do about it, and it wasn't like I'd put much effort into actually producing it myself. No, what was annoying was when foods I'd prepared myself would get snaffled. It takes quite a little time to make a good mushroom sauce, and this would regularly go missing. I had an idea.

I've always been into mushrooms. Not the hallucinogenic ones, more the wild mushrooms which sprout from the most unexpected places almost overnight and taste a thousand times better than any of the watery white rubbish you get in the supermarkets. Whole armies of pale, ethereal umbrellas in the undergrowth. I would regularly go out in pick them from the parks ad footpaths, and my room was filled with strings of dried mushrooms hanging from the ceiling, turning gently in the draft from under the windowsill. On one particular mushroom-hunting journey, I came across a mushroom which would be instrumental to my revenge.

The shaggy ink cap is actually delicious - it has a wonderfully rich, intense mushroom flavour and will almost melt into anything you make, turing it a lovely inky black colour if you use some of the older, larger fruits. However, if you ingest alcohol for anything up to THREE DAYS after eating the mushrooms, you will experience severe side-effects which can include nausea, vomiting and heart palpitations. Nasty. Of course, I don't really drink much at all (just not my thing, it's not a matter of principle) so I would be fine, but if anyone nicked it, well, let's just say that there was an entire wall built out of empty beer cans in the kitchen.

I had to wash dishes for a year
Hundreds of the fuckers - I got to know every single piece of cutlery, and by the last week, you know what I did?

I STOLE MY FAVOURITE SPOON!!!

Oh yeah, that showed 'em, they never knew what hit 'em, yeah, one spoon down, hah! Take that, spoon under-appreciators!!!

On the toilet door at my all-girls' school
'I like sucking cocks 'cos they taste salty, like'

then underneath in a different hand

Then again with the first person

'Wait, how do you know what wallpaper paste tastes like?! ANSWER ME!!'

'Um, I was abducted by aliens when I was young and was force-fed wallpaper paste until I was 6, at which point I learned their weakness for Doritos and escaped'

then underneath all of that in red pen