I missed my 1337th message. Fucksticks.

I'm a lovely friendly b3ta lady, and if you're nice to me I will be nice to you.

Be a wanker, and I will merrily be a cunt to you until you either go away or I get bored with you. Nice kitty.

I am currently enjoying the layabout life of a fashion student after three years slogging it out as a self employed designer and animator. Fuck that shit!

I was mutilated by the wonderfully macabre Rev Jesse 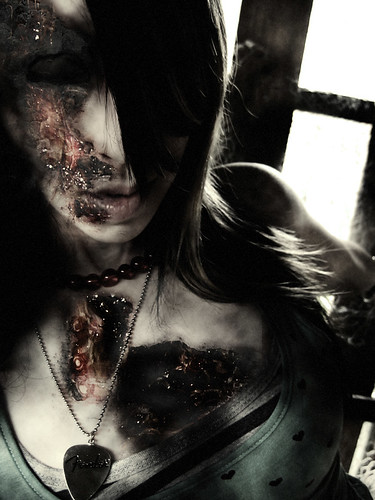 Some of the crap what I've doned:
cNuts Me as a Sin City hooker

My ex as a kitten.

The lovely Bazmonkey realised I had a long-lost family member There was this girl
PROPER fucking mess. She had this crazy poodle hair that sort of used to be a bob but had grown out too far for its own good, big black circles under her eyes, hooded eyelids, teeth so crooked and crowded they bore little resemblance to a human mouth at all - plus they were yellow and fluorosis stained. She had chronic eczema all over the palms of her hands and when it flared up really badly she actually left little flakes of dead skin and pus on EVERYTHING, and she had acne on her forehead even though she was only 11 but she had a fringe that virtually covered her eyes so you couldn't see it most of the time. She was so minging that nobody wanted to touch her, never mind be friends with her, and as a result she was really moody and antisocial because she assumed that if someone wanted to get to know her it was only so they could find things out to use against her and make fun of her. The lads drew cartoons of her and passed them round, then one day she totally lost it and attacked one of them and nearly scalped him so after that even the few people who had been friendly to her avoided her like the plague. When her first pet died everyone made fun of her for it, suggested she'd killed him herself because she was crazy. Her desperate attempts to be nice to the other girls in her year and make friends were rejected and she was branded a "minging lezzer", thus cast out even further.

And worst of all?

That little girl was me.

Still, as it often goes, I more or less grew out of my ugliness and by the time I left school everyone thought I was great. Plus I ended up with a wonderful boyfriend who thinks I'm sex on legs, so it wasn't all bad.
(Sat 20th Jan 2007, 18:30, More)

Don't lose your virginity to a fat bloke
My first boyfriend was somewhat less than svelte. Being a gawky, buck-toothed social outcast at the time (at least that's how I saw myself) I thought I might as well go for it as he was the best I was going to get.

I was 16, he was 19. We were both virgins. However, he didn't have even the slightest clue what to do beyond putting his small, chubby, barely-erect member somewhere in the vicinity of a part of me that deserves a lot more respect than it got that night.

Maybe it was nerves. Maybe it was tiredness. Maybe he was just the only 19 year old on the fucking planet incapable of achieving anything more than a semi when confronted with a naked blonde sixteen year old. But it was like being rogered with an uncooked hot dog.

He also didn't understand that if you're on top you support YOURSELF. You don't just lie belly-down on your partner and wriggle, whilst crushing her to death.

As well as that, his lack of familiarity with exertion meant that he sweated. A lot. And as the grotesque ordeal reached its unfortunate end, I found myself staring at a drip of sweat, quivering ominously from the end of his nose, a mere two or three inches above my face.

I prayed. I prayed at that moment that the inevitable wouldn't happen. But in the end all I could do was watch, helplessly trapped beneath a lump of inept podge, as the malevolent salty droplet lost its grip on his nose and landed

You Sex Me, I Love You, Yes?
My fiance's cat Cricket only recently started coming into season regularly as she was the runt of the litter and took a while to get going.

However, the last time she came into season I happened to be visiting and she decided that I was to be her concubine.

Cue three days of her following me around the house, yowling and snorting in what she presumed was a seductive fashion, and every time I turned around to tell her to fuck off she stuck her bum out at me and gazed provocatively at me over her shoulder.

There's something distinctly unsettling about having a cat beg you for sex.

Oh, and her fat ginger unrelated brother Hamlet will walk into empty pillowcases if you hold them in front of him - much fun to be had with Cat Trapped In Pillowcase Trying To Get Out games. And we once put a sock on his head. THAT was funny. And he also likes standing on the edge of the bathroom sink staring down the plughole hyptonised by the Zen-like question of where the drips go.
(Sun 10th Jun 2007, 0:55, More)

You poor people
My parents are mint...well my Dad anyway. I came home one day with twenty five quid's worth of hash and rather than going mental he went out, bought a load of Green and Black's organic chocolate and made the most spectacular triple chocolate space cakes EVER.

In addition to "4 Years of Continuous Pain"...
Once whilst having a mould taken of my lower jaw, my dentist was prodding around to make sure it was pushed in properly. He accidentally prodded one of my sublingual salivary glands in the process.

Cue a spectacular jet of saliva arcing gracefully a good six feet across the room and hitting his assistant in the back of the neck.