27 8 9. Sulky In quite a good mood at the moment, actually. Sometimes found wearing a hat.

Here is me being chipper (and somewhat younger): 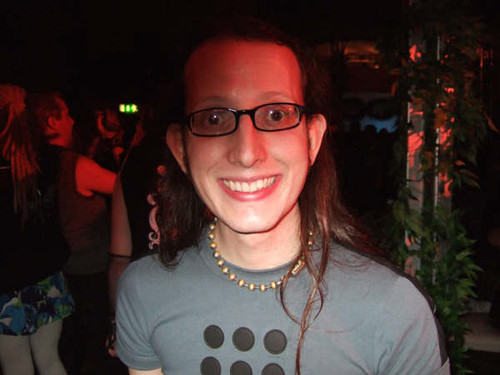 Gas mark 6 for about half an hour, and your pea will be roasted to perfection.
The N29 has always been a nightmare, but a couple of years ago the buses were "upgraded" from capacious double-deckers filled with seats to the new spontaneously combusting bendy buses, with their "increased capacity" consisting of three seats in total and a lot of standing room with not enough things to hang on to. I dislike bendy buses at the best of times, but using them at 4am on one of the nightclub - student ghetto routes just crosses the line. Owing to the impossibility of wedging yourself into a corner seat and minding your own business on a bendy bus, within the first year I'd had my phone stolen twice and my wallet stolen once, I'd been frequently caught in the fallout of uncontrolled vomiting and several people had fallen onto/into/over me, with various results. And it's really hard to read your book.

Despite the above rant, I actually had a seat on the night this story takes place.

It was a Friday, I had staggered out of the Electric Ballroom in Camden at around half past three and, stopping only for water and Tic-Tacs, made my way to the bus stop. The fates were clearly smiling on me and I managed to collapse into a seat and dive into my book in an attempt to block out the horrors around me. All was going well, until the person sat next to me departed and was replaced by someone I could tell was going to be trouble. Clearly chav-curious at the very least, and of the particularly unleasant scrawny, weaselly breed, he entered the bus with two much bigger friends who took up flanking (and CCTV-blocking) positions before sitting down heavily next to me, forcing me up against the window. As he twitched against me like a nutter, I buried my face in my book and desperately hoped I'd be able to avoid a stabbing. Then I felt something... else.

Being a filthy nu-metallist (at least occasionally), I was wearing enormously baggy trousers liberally covered in random zips and buckles. My new neighbour, under cover of his jiggling, had opened a zip at random in hope of interesting things to steal, sneakily reached inside and wound up with a handful of my knee. In full view of his colleagues, both of whom were now failing to conceal smirks of amusement. I looked at him, he looked at me with dawning horror. I grinned and raised one eyebrow, one of his buddies started sniggering and the other cracked up. I looked down, and only then did he remove his hand.

He stormed off the bus at the next stop, his associates following and loudly questioning his sexuality. I had a Tic-Tac, zipped myself back up and went home to bed.
(Tue 30th Jun 2009, 10:49, More)

Not the sharpest utensil in the inappropriate cooking device.
A colleague at work recently performed the most comprehensive ruination of a mobile phone it has ever been my fortune to witness. It began with a simple accident that's happened to many of us at one time or another, but ended in unmitigated disaster. As this is really quite a dull story, I shall present it in the style of 24 to add dramatic tension.

10:17AM: Our hero is using the ladies when disaster strikes! Perhaps she is playing a sneaky game of Tetris, perhaps she's merely an oaf, but her mobile slips, somehow, into the toilet bowl. Panicking, she swiftly retrieves it and returns to the office. SPLIT SCREEN: Our heroine looks distraught. A colleague points and laughs.

10:21AM: The mobile is still dripping, but this does not prevent our brave heroine from switching it on to see if it still works. Nothing. Undaunted, she connects the phone to her charger in case "the water drained out the battery, innit?". Upsettingly, electrocution does not ensue. SPLIT SCREEN: A dripping mobile is wired up to the mains. Our heroine is worried. A colleague looks on in horror.

10:26AM: Drying the phone is suggested. It is disconnected from its charger and carefully wrapped in a paper towel, then placed on top of a radiator. SPLIT SCREEN: The forlorn bundle sits atop the radiator. Our heroine looks on anxiously, but not without hope.

10:29AM: Our heroine has a plan! Having decided that her phone is not drying quickly enough (perhaps she has a call to make, a call of vital importance to NATIONAL SECURITY) and with the stealth of a ninja, she retrieves her phone and sneaks off to the kitchen. Carefully unwrapping the moist paper towels, she gently places her phone down, seals the door and sets the timer. Of the microwave oven. The microwave explodes*. SPLIT SCREEN: A colleague, alarmed at the noise and smoke, rushes for the kitchen door. The wreckage of the microwave exposes the blackened and ruined corpse of the phone. Our heroine falls to her knees, an exhausted, grief-stricken expression on her face.

How to become a superhero by drinking cleaning products....
Have a delicious roasted pea, in the form of something I wrote on LJ four years ago:

Investigation into the effectiveness of Mr Muscle with The Power of Orangestm in battling cosmic villains.

New Mr Muscle has The Power of Orangestm.
I set out to discover what this means.

Firstly, we must learn more about oranges. A thorough web-search has revealed the average diameter of an orange - 7.5cm.
From this we are able to calculate the volume of said average orange using the formula v=4/3*pi*r^3
so v=1.33*3.14*3.75^3
therefore v=220.781249cm3
which we will round to 220.8 for the purposes of simplification in the subsequent calculations.

This allows us to estimate the weight of an average orange. As we know, 1 litre of water weighs 1kg. 1 litre is 1000cm3. An orange is largely water, so a 220.8cm3 orange will weigh roughly 220.8g. Again for simplification and because I'm not sure of the exact makeup of an orange, not to mention the fact that oranges are more ovoid than spherical, we will round this figure to 250g.

Now, The Power of Orangestm. What is it? I have racked my brain thinking of what this might be, and the most likely conclusion is that the colour orange has some intrinsic power. The best-known manifestation of this power is The Power of Ten Tigerstm as used by Phantom off of Defenders of the Earth.
(Whether or not Phantom ever actually used the power of ten tigers, as we never saw more than seven superimposed over him while he summoned his power, is a question to be investigated at a later date.)

Another web-search tells me that the average weight of an adult male Bengal tiger is 220kg.
A tiger is only half orange however, so for this calculation we will use the figure 110kg, or 110,000g. We will assume that half of the power of a tiger is also derived from the black bits.
To find out how many oranges are equivalent to the orange half of the tiger we simply divide 110,000g (mass of orange half of tiger) by 250g (mass of average orange).
110,000/250=440
However as half of the power of a tiger is assumed to be derived from the black bits, to equal the power of an entire tiger we need to double this figure, and therefore 880 oranges are equivalent to one whole tiger.
Multiply this figure by ten to get the power of ten tigers:
880*10=8800
or 8800 oranges=1 Phantom.
so 1 orange=1.136*10-4 Phantoms
=0.0001136Phantoms
=113.6microPhantoms

Next we investigate the price of Mr Muscle The Power of Orangestm cleaning products, and find that a 750ml bottle costs £1.57. I will calculate the power of this bottle financially rather volumetrically, to give the greatest possible power value.
In Safeway on my lunch break I discovered that the price of a single orange is 19p. Assuming that there is no profit margin whatsoever and that Mr Muscle has some method of extracting and concentrating The Power of Oranges(tm), each bottle may therefore contain up to (157/19) 8.263 oranges, giving a total power of (113.6*8.263) 938.6768microPhantoms, or (to 2sf) 0.94milliPhantoms.

Thus we are able to conclude that:
a) A cleaning product made from Phantoms at the same ratio would be 8800x(4sf) more effective than Mr Muscle with The Power of Oranges.
b) Eating 8800 oranges in a single sitting would allow you to absorb enough power to kick the shit out of Ming the Merciless.
c) It should be possible to achieve a similar effect through ingesting 1065 (8800/8.263 to 4sf) 750ml bottles of Mr Muscle with The Power of Orangestm cleaning solution, but this can not be endorsed by the author.
(Mon 28th Jul 2008, 19:40, More)

I'm a Catholic.
In practice I'm an atheist, but according to the rules once you're in you're in, and therefore unless I manage to get myself excommunicated I shall be considered a Catholic until the day I die.

While I'm an atheist, I'm not militant. I'm happy for anyone to hold their own beliefs, as long as they can be reasonable about them. I don't feel the need to screech passages of Dawkins at anyone with the temerity to be openly religious within my field of vision. In short, believe what you want as long as you're not a dick about it.

Some of my friends feel differently though, and this is why being a technical Catholic can occasionally be brilliant - because, in circumstances where I feel someone is in imminent danger of death (Oh no, I thought you were going to step out in front of that car! Whoops, I thought you were choking! etc), I'm allowed to perform an emergency baptism.

There are few things funnier than the look on an aggresive atheist's face when you inform them that not only have you poured water over their head when they weren't expecting it, but that as a result they are now Catholic.

The customer is a twat.
I know call centre folks get a bad rep, but it can't always be their fault. Take for example the lovely young lady who I was put through to when ringing British Gash - she was polite and helpful and managed to fix my problem despite her badly-concealed snorts of laughter. And it wasn't her fault that I was unexpectedly put through after twenty minutes on hold, and was paying so little attention at that stage that I continued my impromptu "British Gas employees drink monkey jizz" song (to the tune of the hold muzak - a pan-pipe version of Greensleeves or somesuch I think) for two more verses before realising that someone had finally answered.
(Wed 10th Sep 2008, 14:05, More)