This is Steve, a professional bounty hunter, the one with the hat is a monkeu called Hercule De Cabron, at least I think that's his name, I can barely understand a single word the chap says. He's not the sharpest tool in the box, but he can sniff out half a jammy dodger in a barrel of used socks.
This pair have been commisioned to track down a sample of purest hummus, rumored to have been spotted somewhere in the vicinity of the b3ta front page.

Day 2: Set off across the atlantic, using a combination of sail and monkeu wing power

Day 3: No hummus in the whitehouse, some interesting things did turn up though. It seems Mr Bush loves horses, he says "they're the best of all the animals"

Day 4: Ran into a spot of bother with the natives

Steve discovers that the eaglets would rather listen to him play accordian than eat him. Mama eagle is not impressed.

No hummus today, but Hercule thinks he can smell something following us

He's been arrested for hummus-counterfieting. Without Steve to look after him, the police have taken advantage of his simple nature and tricked him into signing a full confession, even though the poor fellow can't read.


Day 16: The tunnel isn't quite the escape route we hoped for

Day 17: Back to the drawing board

Day 18: It's amazing what you can build with a few bits and pieces swiped from the prison canteen

Day 19: Hiding out, lying low at Steves' grandmas place, it's a bit snug though

Handy browser keys
(these work on Internet Exploder and Mozilla and probably a few other browsers)
SPACEBAR makes pages scroll down
SHIFT + SPACEBAR makes pages scroll up
PAGE UP and PAGE DOWN also do scrolly things
CTRL + ENTER adds www. and .com to URL's in address bar (so just type b3ta then hit CTRL + ENTER)
F11 Fullscreens your browser and back again
CTRL + F5 does a full proper refresh thing
any more? Clicky for more pics and stuff and MOST IMPORTANTLY a VIDEO of this bad boy in action, an absolute MUST SEE


sorry if I'm sounding like an ebay listinig but I'm rather chuffed with this little piece, but seriously folks, if you're not impressed now, wait to you see the video
(Tue 18th Dec 2007, 12:18, More) Is that a train I hear? I only need another 261 to beat Monkeons record.
PS the soldier is saying "Gies yer helmet"

Click for the bigness
Oh wow, a FP i'm honoured, I'd like to thank everyone who helped in the making of this pic, of course there's the baby and Mr Google and Mr Adobe and Ms N. and i'd also like to thank the fans and jesus and edna, the inflatable sheep
(Mon 17th Nov 2003, 13:22, More)

All the cool kids are getting them Clicky for my gallery Clicky for my gallery

Never piss off the guy who looks after your server
a few years back I was the IT bod for a company in a little backwater town that imported cheap tat. The manager was a very shifty bloke who was a failed accountant with a haircut verging on a combover.
One day a lady in a suit came along and told us that the company was bankrupt and we were all being laid off. A few hours later a few of us were called into the managers office and told that he had set up another company and we were being re-hired. Now I'm pretty sure this was rather illegal but I was still getting paid and the new office was closer to home so wasn't too fussed.
Now this new comapny is on very rocky ground, lots of hush hush meetings and don't tell so and so and paychecks being rather late and one day we turned up to find the door nailed shut due to the landlord not being paid. But it was an easy job and I got to spend most of the day photoshopping for b3ta so I persevered.
I went on a few days holiday and when I got back found a letter telling me I had been fired, a letter? how dare he!
Actually it was rather astute on his part as if he had of told me in person I would have been sure to wreak havoc on the server on my way out and no I had no such opportunity for revenge.

about a week or so after I was fired, shifty manager sacked a bunch more people (including a lady with a baby on the way) and as we had been working for an illegal company there was no comeback and signing on wouldn't be possible for a couple of months. complete bastardaroonie

Now the particular database program used in this office was a very delicate old thing and if something went wrong, nothing short of a complete restoration of the drive would fix it. Luckily there was an automatic tape backup system in place. Unluckily this system hadn't been working properly since we moved offices. Luckily I had been making backups by ghosting the drive and saving the copy to another part of the server. but about a month before I was sacked I had installed a little program called "dead mans switch" on the server, running under a super admin account. This was a little program that required me to click a button about every three weeks, otherwise it would do this.

and that's what it did.

a couple of weeks after I was fired my final paycheck arrived in the post and the very next day I recived a phonecall from shifty manager asking me to come and fix the server. I told him I'd consult my diary and get back to him.

This one is ongoing
but ont saturday 21st of may, this will happen to all the computers at my former place of work

That'll teach the baastard not to fire the only member of staff that knows anything about computers, and by feckin letter! didn't even have the balls to tell me to my face
MWAHAHAHAHAHAHAHAHAHAAHAHAH!
(Fri 14th May 2004, 1:40, More)


» In the Army Now - The joy of the Armed Forces

Different kind of army
In the seventies, Belfast was a rather troubled place. One morning my granny went out the back to empty the bin and there was a sniper sitting on the back wall, waiting for one of the frequent brit patrols that went through the area.

Again, this is when I worked for the americans
Users got three goes to enter their password. Three strikes means you're locked out, they'd then have to call us and get it reset.
"Sure, that's no problem, the computer has randomly generated a new password for you, you got a pen?"
"yes I do"
"N U M P T Y"
"is that uppercase?"
Yes it is, you have a nice day now"

We were on Ko Phag Nagn, a Thai island famed for its full moon parties (although everyone's doing them nowadays)
Anyway, we were on one of the quieter beaches and spot a large crowd sitting outside one of the bars, so we saunter along to see what's going on.
Hey, it's a fire jumper, he sets up his big hoop, covers it in petrol and lights it.
Does lots of acrobatics, leping through backwards, sideways and so forth, all very spectacular.

then he invites the audience to have a go.

One bloke is straight up to the challenge, he's up and through the hoop without pausing for breath, then another chap, then a girl goes through and catches her shin, ooh nasty.

Then I think "I could do that" so I walk over, have a look and then decide "actually no, that hoop is just a tad too high for me to be sure of clearing it" and then I go and sit down again and some more folks jump through.

Of course, by the time I finish my beer I realise that it's not too high and I could easily clear it, so I head over, line my self up with the flaming hoop, I start running, I throw myself through the hoop.... 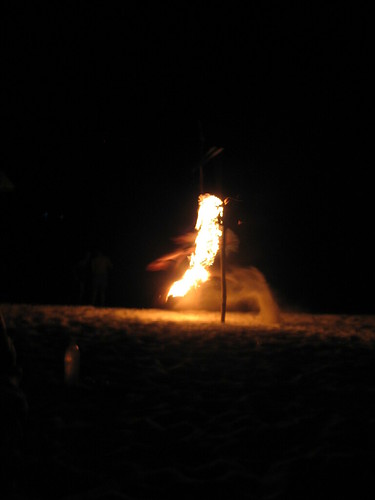 I fell on my face with a burning ankle, had to wear bandages and limped for weeks, still have the scars BUT THAT'S NOT THE BEST PART


I run into the conveniently situated sea and cool my ankle, then I hobble back to my seat and start of subsequent beers. Meanwhile this german girl (a nurse apparently, not that that has much bearing) has decided she wants to do the leap of doom, but she's looking a bit nervous. So in order to be sure she clears the hoop, she's decided to give herself a boost.
She drags over a plastic chair and sets it in from of the ring, now these chairs are unstable at the best of times, never mind trying to put them up on sand.
She climbs on the chair and everyone is shouting "no don't do it you dozy person" or similar
She's evaluated her situation and thought better of it, she climbs down from the chair, everyone breathes a sigh of relief.

She moves the chair closer to the hoop and gets back on, everyone decides to stop shouting at her and let darwinism take over.

She's on the chair, bracing herself like a diver, her friend is on the other side of the firey ring, beckoning her to her doom, we're all watching, expecting the worst, but what happened next was still shocking.

She does it! The german lass propels herself off the chair, but as she lifts one foot, the other sends the chair backwards, she's unbalanced, she has no momentum, she's falling forward, but unexpectedly, she lands on her foot.

One foot on either side of the ring of fire.

Her shorts quickly go up, she's standing there with a burning crotch that cannot be cured by natural yoghurt, her friends drag her out and into the sea.