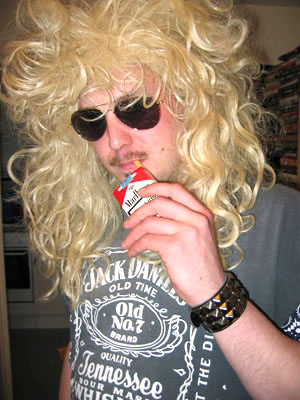 Well I thought it was funny...

Mmmm, yummy crisps!
I was up to this and that in Undergrad days of yore at an Architecture school that rhymes with 'Fartlett', when I found a dead sparrow on a windowsill. I decided to remove said dead bird and placed it in the nearest receptacle that came to hand... an empty crisp packet.

I was walking through the studios to put it in a bin and spied a girl who I thought was a bit up herself. So I walked past her holding the open packet, pretending to munch on a tasty potato crisp. Of course, without so much as a "Golly, Pastor, those sure look like mighty fine crisps! Might I possibly have one?", she shoved a scrawny mitt straight into the packet.

She let out a blood-curdling scream and ran off in floods of tears. I got a bollocking because, naturellement, she went blubbing straight to the Feds, and had to apologise nicely, but it was pretty funny.
(Fri 14th Dec 2007, 20:15, More)

Toilets, or lack thereof...
I was in a hospital bed, on an NHS ward, on spinal precautions (stuck on back, not allowed to move, unstable spinal fracture) and they didn't even allow me a bed-pan, so I basically had to crap the bed, which would then be cleaned out. Unfortunately I was so full of morphine that I couldn't even poo, and had had enough laxatives, both oral and suppository, to unblock a regiment. Nothing.
I had had surgery twice in three days and the second general anaesthetic didn't agree with me too well. I had a fairly major psychotic episode and had texted everybody in my phone to say that the ward was being run by Al Quaeda, and that they were about to kill me. So eventually family and friends gathered around to try and cheer me up, when I felt everything starting to move... I motioned all to leave the vicinity of my bed and draw the curtains. An horrible sound ensued, accompanied by pathetic mewlings of ring-splitting pain from myself as I shat seeming yards of rock-hard faeces.
When the bedding had been mucked out, my good friend Holf was first to be brave enough to come back. He reckons I was practically floating above the bed with a beatific look on my face, blissfully unawares of the unholy smell that still lingered...
(Fri 2nd Sep 2005, 18:01, More)

Tossers
The most miserable wedding I ever attended was that of one of my then-wife's schoolfriends who was marrying a Royal Marines officer.

At the church ceremony the happy couple had walked out of the church under an arch of ceremonial swords, and all the girls were swooning over all the nice handsome officers in their nice smart uniforms.
At the reception, the three of us young male civilians were generally being treated like so much shit on their shoes by the officers, who by now had changed into their evening-do uniform and looked like waiters.

So we compiled a short-list of songs to request from the DJ, hoping he'd have at least one of them. We hit paydirt with 'War' by Edwin Starr, and as it started, a murmur ran up the huge table where the officers were all sitting, as they realised they were being mocked. They made a scarily quick decision to pretend to be amused for the sake of appearances, but you could tell they were really quite pissed off...
(Mon 18th Jul 2005, 16:19, More)