Married to the most fantastic female in the known universe(tm), Parmesan disguises his superpowers by writing for a renowned environmental business and policy journal.

However, at night, he is: 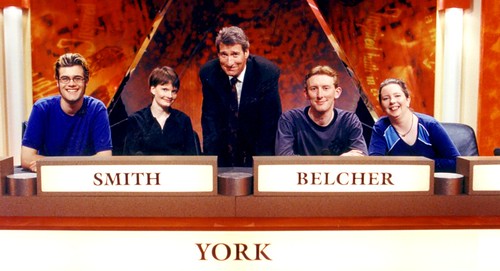 That's him on the left.

Rest of my photos With regard to this :


The Dante's Inferno Test has banished you to the Sixth Level of Hell - The City of Dis!
Here is how you matched up against all the levels:


How Evil Are You?

A chickpea in my knee
I found a weird lump near my right knee. This, oddly enough, corresponded with my Dad's weird lump near his right elbow - which looks like a third elbow, it's so big.

Sensibly enough, I decided to operate.

It hasn't come back.

Twice the pleasure
I have two tales for you goodly gentlefolk:

1:
First girlfriend. We were both fifteen. She was a Wimbledon ballgirl. It didn't last long - a month or two perhaps. She split with me after the first (and indeed only) time I got off with her. I think she mistook me putting my arms around her for, er, something else. Just as well, really. She had long, blonde hair that you could run your fingers through and get them stuck. It was _that_ frizzy. I remember being quite upset about it until my old man told me that Have I Got News for You was on.

2:
Second girlfriend. We were both 19. I fell for her on the floor of the University of Warwick's sports hall. Not the most promising of venues, I confess. We were both at a big student conference there, and were in the same year at the University of York. I had been turfed out of the place I had laid out (German tourist style) beforehand and ended up next to her. She fell asleep and, looking back, I think I fell in love with her then. I didn't really realise it, though.

So, I picked up the courage to ask her out on the coach back. Then she mentioned that hideous phrase - "my boyfriend." Fvcksocks.

A few months later, I heard that they were no longer an item. So, I asked her out, by way of asking her to do a graphology assessment for me, bizarrely enough. I was so nervous I had to write down and practice what I wanted to say ( I've subsequently framed it) She was rather taken aback, and asked for some time to think.

Foolishly, I thought I was in there.

I wasn't. The next day she turned me down. Her previous boyfriend had been a bit of a headcase, apparently. She didn't feel ready for another relationship.

I didn't eat for two days. I wrote out Radiohead lyrics. Nuff said.

Fast forward two weeks. I met her at a Battle of the Bands heat. We had a good natter and she agreed to go out to a club (of the alternative music variety) the following night. I didn't see her until gone midnight - I thought I'd been stood up. She had a decent enough explanation, although I can't remember what it was offhand.

The next day I saw her at the Amnesty stall. She asked to have a word with me. We went outside. It was the middle of February and was a little bit on the chilly side to say the least. We sat down. She asked me out.

Five and a half years later, this October, I took her to the same spot and proposed to her. She said yes.

Ah, almost forgot. Between me asking her out and her asking me out, I decided to take revenge on her previous bf. I got him super-soaked and flanned during RAG week. I eventually owned up to this a few months into our relationship. Her reaction? "But that wasn't him!". I'd put out a contract on the wrong bloke, poor bugger.

On arrival, my friends and I went off to the sports hall to leave our bags and mark out a place to sleep. On returning in the evening, I found that my carefully laid out sleeping bag and my rucksack, had been chucked aside by some inconsiderate fellow. I ended up sleeping next to a girl in the same year as me but whom I didn’t really know called Anna.

We talked for a while and eventually she fell asleep. I was soon quite enamoured with her. I worked up the courage to ask her out on the coach back to York but I overheard her talking about her boyfriend, which was a bit of a sod.

After a couple of months I heard that they had split, so I asked her out in January 2000. I used the cunning medium of asking her to analyse my handwriting (she did a bit of graphology back in the day).

She was still getting over breaking up with her ex, (who by all accounts was a right shit), so after a day to consider it, she turned me down.

I was just a trifle upset by this. Well, alright, I didn't eat or sleep for two days and started writing out Radiohead lyrics (Let Down, as I recall).

I had a word with my Dad, who advised me to pursue her, just not too vigorously. I took it.

One thing that he didn't advise me to do is to get the offending fellow supersoaked and flanned during RAG week. Nevertheless, I did this anyway.

Two weeks later I met up with her at a battle of the bands heat, as friends. We agreed to go to the alternative night at one of York's clubs the next Tuesday. On the night, I thought that she had stood me up, until she turned up at midnight, for some reason.

The next day, we met in my college. She asked me out. She was rather surprised when I said yes, as she thought I'd tell her to take a running jump.

After a couple of months, I told her what I had done to her ex. Her reaction? One of hilarity? Shock? No, horror. I'd got the wrong bloke.

Several years later, I asked her to marry me on the same spot. We got hitched earlier this year. 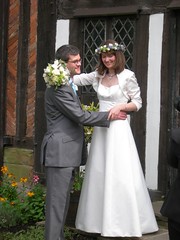 Breakdancing
I breakdanced in front of a hundred or so guests in a yellow silk shirt and blue corduroy trousers and waistcoat.

Ah, just thought of another one...
Many years ago, my Nan died, in not the most pleasant way possible.

For the funeral we had a humanist minister (read: thankfully not religious). He was an idiot.

He got my Nan's name wrong. Well, to give more detail, he used her given name "A", rather than the one everyone used, "B". I didn't even know that "B" wasn't her real name until after she died. I think some people at the funeral wondered if they were at the right one.

He then said that my Nan and her first husband (my Mum's Dad) had separated. Perhaps "been separated" would have been a better phrase - my grandfather died of a heart attack after laying paving slabs. My Mum was only 8. Naturally, she was somewhat upset about this cock-up, not to mention the name thing.

At the end I saw my Nan's second husband, who I know as my Grandad (ex-army captain, trained Gurkhas, still fits into his uniform despite being in his 70s) pinioning the minister against a wall and having some rather strong words with him.