Mr Twisty Cheeky asks: As a contrast to last week's question - Has anyone ever been evil to you, out of the blue, for no reason? Have you ever been total twuntcake against all logic?

Re-post, Selecta
I'm not the sort of person who usually plays tricks on people. One, I don't have a particularly devious mind and two, I generally can't be arsed. However, when the opportunity presents itself I just can't resist.

I used to work with a guy called James. Nice guy but a bit uptight. Would easlily fly off the handle at the slightest provocation. One day James came into work and decided he couldn't be arsed to park correctly and just dumped his car across three spaces. I sensed an opportunity for merrymaking.

On the pretext of going out for a fag I snuck into the car park and took a picture of the front of James' car on my phone, thusly: 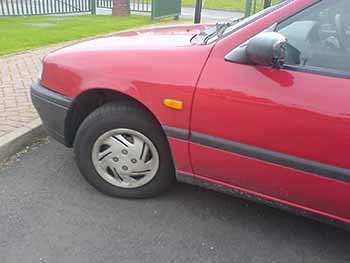 Later, when James popped out of the office I quickly photoshopped a wheel clamp onto his car, thusly: 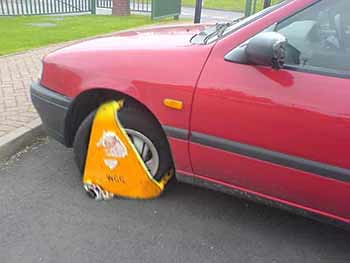 I then tranferred the image back to my phone.

When I got back to the office after my next fag break, I looked stony faced. James asked me what was wrong - and for once I managed not to give the game away by laughing. I played it deadly serious.

"Mate, I think you need to go and look at your car."

"You'll never believe me. Here, I took a photo." And I showed him the shopped picture of his car on my phone.

My poker face would have put a Vegas hustler to shame. "No mate, I swear it's not a wind-up. Go and see for yourself."

Rates well on a Cost/Benefit basis.
Gets a click.
(