Talking with a friend yesterday about school dinners, she suddenly said, "We had to march into the dining room behind the School Band... except on Thursdays." Since all of us were now staring, she qualified this with, "...on Thursdays there was no wind section. It was a tradition."

What weird stuff have you been made to do "because it's a tradition."

Best tradition ever...
is the so called "Clausen-Treiben". Saint Nicolas Day (Dec 6th) evening young men in our village dress up in wild costumes made of fur, animals heads and antlers, wearing large cow bells around their waist and carrying wooden sticks. After dark they start roaming the village beating up EVERYONE they see on the streets. They go from house to house, ask for a drink (which they usually get) until they are drunk (which takes quite a while). It is based on a medieval tradition meant to fight the ghosts of winter.
It is quite a shity tradition if you are the one who gets beaten up though.
To give you an idea: 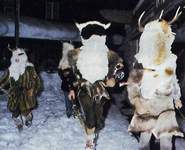