You can probably work out a lot more about me from my website: chthonic ionic - www.chthonicionic.net

There's also my "meanwhile..." gallery where I've stuck some of my captioned piccies.

My brother-in-law is an architect in South Manchester please give him work :) 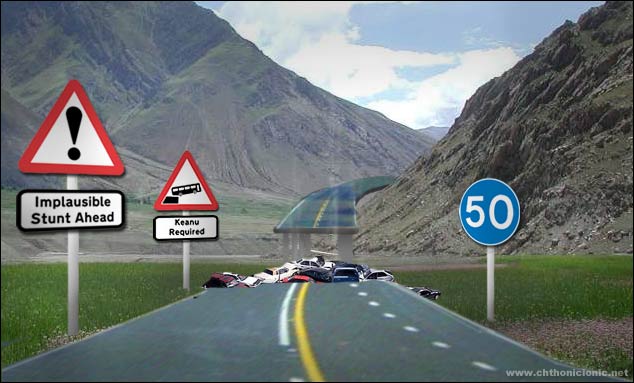 For that ole time flavour you like not a lot... fun for the whole cave Lulu is going to make a mint on this one 
» Have you ever seen a dead body?

When Rob suggested this question, my immediate reaction was, no, not yet anyhow.
Then I remembered Joe.

Joe had been covered with a blanket. I remember pulling it back, steeling myself in case I couldn't cope, but it was OK - there he was. Kinda peaceful looking.

The hospital left me with him as long as I needed. We sat for an hours talking about all the things I'd wanted to tell him. A one-sided conversation maybe, but a conversation all the same.

It was the silly small hours of the night, so it was quiet both inside and out. So quiet that I hardly noticed time passing or what I was doing. I certainly wasn't that rational - at one point I realised I'd spent quarter of an hour attempting to contort my body into the same pose that Joe was now occupying, just so I'd always remember it. I can't now, which is sad.

At some point I must have fallen asleep. I was woken by a nurse asking if she could take Joe away again, which was when I realised I'd seen enough and made my peace.

Last one from me today
I attended a fantastic registry office wedding in Yorkshire once where the bride and groom had chosen to get married to the Imperial March from Star Wars.

All very geeky and dramatic.

Unfortunately, it's quite short, and the tape kept running, so they actually conducted most of the service to the Cantina Music from Star Wars...
(Thu 14th Jul 2005, 16:34, More)

Travelling across the centre of Australia by bus
I got chatting to the driver. He was bored. It takes hours to get anywhere and he's got to keep himself awake somehow, for his benefit as well as ours.

He had three favourite methods:
* He'd transfer a pen from his left shirt pocket to his right with his right hand, then from his right to the left with his left hand. The rhythym of this would give him something to fill the hours.
* He'd find a nose hair and very gently, very slowly pull it out. This is would wake even the dead.
* But, best of all he'd wait for someone to go to the onboard toilet, wait for a count of 5 and then gently dip the brakes. The subsequent *thunk* would keep him awake and giggling all night long.
(Fri 2nd Sep 2005, 11:57, More)

We turned up late to my cousin's wedding
mostly because we were giving her brother a lift up to it. He managed to remember the 6 bags of camera equipment he'd need for a photoshoot later that day, but not his suit.

Anyways, we get to this country hotel and there's loads of people milling about in their best clothes waiting to go into the reception.

How late are we? Much embarrassed, we slip into the queue to shake hands with the family and start talking to those around us, telling how Sara is my cousin and how I'd not met Steve her new husband yet and why we were late.

Was having a great time till I realised that I really didn't recognise _any_ of the people in the queue, or, as we got closer to the door, any of the people welcoming us to the reception.

Turns out that it was a Sara marrying a Steve alright, just not the correct Sara and Steve.

To a huge round of applause, we bow out of the queue and sprint to the other end of the hotel, where the correct wedding is just starting.