Do you have red hair? Do you know someone hit with the ginger stick? Tell us your story.

Greetings cards
You remember the hoo-hah around christmas about that ginger kids christmas card, don't you? The one that said "Santa loves all children, even ginger ones"? It got quite a bit of press coverage, with quotes such as:

'If it had been about a black child or an overweight child the store would have been shut down by now. '

Fair enough, if you had three ginger kids you wouldn't have much of a sense of humour either. Made worse by her boyfriend being unemployed and her looking like she runs the gaming racket on fucking tatooine. 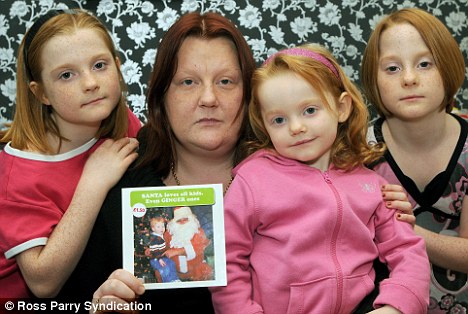 This all blew over, of course, and after a few jibes in the national press it was forgotten. About a week later I was perusing christmas cards in WH Smiths in Brum and I found an absolute doozie. There are no pictures of this particular card on the internet, no complaints in the national press, etc., so I can't show you what it looked like. It read like this, though:

above a cartoon of a bloke behind a desk yelling "you're fired" to two blokes, hand-in-hand, with a speech bubble of "Oooh, get her!".

Yes, people. That's right. We now live in a society where homosexuals can have a bit of a chuckle at a joke at their expense and not get het-up by it, but titting gingers are demanding equal rights.

(Full disclosure: my sister's a ginger, so I'm probably a plague carrier)
(

So?
It was funny.

And the mother clearly has fuck all to do with her time, the fat mong.
(

I didn't realise there was a general consensus on how gay men feel. You know for certain that no gay guys picked that up a felt a familiar twinge at reading another joke at their expense? Bollocks do you. Just because nothing was said doesn't mean nothing was felt.

This is majority/minority prejudice, and as such still has the capacity to make the minority in question feel like shit. If you've personally had a lifetime of malicious treatment for your sexual leaning, the colour of your skin, the colour of your hair, it generally diminishes your ability to ignore the jibes. Simply because you're, as you so quaintly put it,'a carrier' doesn't immediately give you the right to insult someone for being a 'titting ginger'. I've got got an adopted daughter from Sri Lanka, but that sure as shit doesn't give me a right to call someone of that appearance a 'titting Paki'.

Prejudice is ugly, and it exists by and large because the majority condone it with their passivity. I've had strangers shouting 'FUCKING GINGER' at me on the high street of a town with no reaction from the surrounding pedestrians. I doubt very much it would have been the same reaction had they shouted 'FUCKING NIGGER'.
(wasps Optic Cockles, Sun 28 Feb 2010, 14:48, closed)

Maybe you should try shouting "Fucking NIgger" at people
and try and make it acceptable.
(

(Although perhaps reintroducing segregation would be a step too far)
(

wtf?
I've just noticed this creeping up my user page. What the hell, guys? This was shit and your clicking it means there's going to be gingers on my screen whenever I go to my profile.
(