Tell us your pharmaceutically-influenced anecdotes, legal or otherwise. We promise not to dob you in to The Man.

Thanks to sanityclause for the suggestion

After One
gurning mental squat party night with me tripping
me noddy off at a free party in London, i wandered out the party squinting at the new day with my two mates and had an exquisite breakfast (note greasy shit cafe) and then took
the 9am train back to Brighton.

We were coming down from various nefarious substances
and the sparkly lights were flashing in our eyes and we were acting like loons, the people in the carraige gave us the odd dirty look and pretended to read their metro newspaper.

Suddenly there is a loud bang and the train judders to a stop.

After what seemed like an age the conductors voice came on the speakers saying "Sorry for the delay, but some youths on the side of the track have thrown a brick at the the drivers window and he´s taking a minute to recover and call the police" I look out the window and there is a group of five or six chavs mooning and generally being abusive.

I look around and what looks like a
monster of a woman on a seat on the next row pulls out her mobile phone and dials what i thought was the old bill,
the next minute one of the chavs on the verge pulls out his mobile and his face turns to sheer horror as the monster woman on the train says "so youre
at school are you kevin, you little cunt? You fucking wait till i get hold of ya" Cue me and my mates pissing ourselves.
(

I clicked but
I've heard this very story many-a-time before; proast or glasscock?
(

HH is an unfunny cunt. 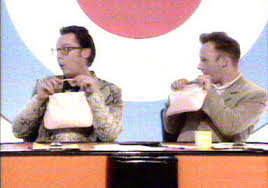 russel howard told this much better