Have you taped all your remotes together, peep-show-style? Have you wired your doorbell to the toilet? What enterprising DIY have you done with technology?

Extra points for using sellotape rather than solder.

Telly power switch
Years ago the power switch on my (already ancient) portable telly died. It was a 1990 model Goldstar, better know as LG these days, and the buggers had used a bizarre power switch that combined a toggle switch that turned on the HT power supply for the tube and a momentary switch that fired up the tuner.

Could I get another switch the same? Of course not, they were custom Goldstar switches I was told by the 'expert' at Maplin, so I pondered it for a moment and decided to buy a chunky metal toggle switch and a push button, and wired them up in its place. I made holes for them on the side of the case using whatever tools I had to hand (shit drill and a kitchen knife I think), and then taped the wires from the old switch into the new ones. And then added more tape. Then a bit more tape. The bastard thing is still working =) 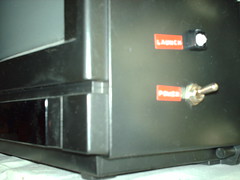 Cricklewood Electronics is your friend
I seem to recall being asked to fix a similar problem years ago. Managed to get a switch from Cricklewood that did the job. Nice work though!
(

Maplins is shit
Everything I've bought from them has broken or been tat or both.
(

Maplin is expensive for components.
And they didn't even have 74-series logic in stock when I asked ages ago.
(