Or you can Facetweet me here or here. But remember to tell me who you are! Election related repost:
Posters aren't the only way they'll try to get you to vote for 'em... Huzzah!
Here's an epic repost while I read the newsletter. Yes I have been photographed on a balcony eating a croissant as it happens... 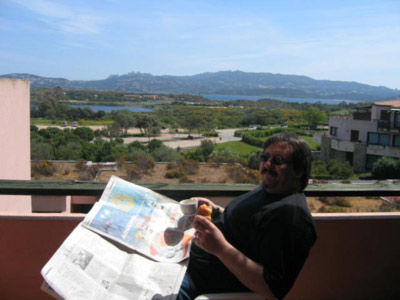 There used to be a comedy club
called Screaming Blue Murder in a smallish pub in Wimbledon.

One night the comedian wasn't doing too well and got a random heckle (I don't remember what). He replied with something like, "And I suppose you think you are funny?" To which the entire audience pissed themselves laughing because they knew who was heckling him. The crap stand-up's face was a picture when he also squinted out into the audience and saw who it was.

A guy I worked with had a cousin in the States
He didn't like this cousin much but when younger he was forced to go with this family to visit their American relatives and ended up hanging out with this guy as they were the same age.

Anyway. At some point he jokingly called his cousin a wanker. His cousin asked what wanker meant and was told some lie about its meaning which made it sound good - told him it was English for 'cool dude' or somesuch.

So....his cousin adopted 'Wanker' as his nickname, getting his friends to call him it and all sorts.

Obviously when my colleague told us this, we didn't believe him. Until he showed us a photo of him standing next to his cousin who was proudly wearing a baseball cap he'd had printed up with the word 'WANKER' across it in bright red letters.
(Wed 19th Dec 2007, 16:55, More)

I used to work in a lab
for a small company. You've probably heard of at least one of their products. Very nice company, absolute arse of a director.

You know when you get medicine you sometimes see 'B.P.' after the name? That's short for British Pharmacopoeia - basically a list of tests which the product/ingredient legally has to pass if you want to use it in any sort of pharmaceutical.

We needed a new FT/IR machine in the lab (basically you prepare a sample, it zaps it with a spectrum of infra-red light and tells you if it's the right stuff).

We had a choice:

The obvious choice was to get the FT/IR machine which was certified as being B.P. compliant. i.e. it was certified to run the test exactly as specified in the B.P. using reference standards which were themselves B.P. certified and output graphs in the same format as the standards in the B.P.

The less obvious (i.e. stupid) choice was to buy the machine which wasn't B.P. compliant. Don't get me wrong, still a good machine but it needed a lot more work to commission it for our needs and it was less easy to run the test and compare the results to the B.P.

The stupid option insisted on by this director cost us about £900 less...but took two extra months to commission it, cost us several hundred pounds setting up our own reference standards and meant we had to pay for a different graph printer as we didn't get the B.P. compliant software. It also took slightly longer to prepare each sample, about 30 seconds longer to run the test and a minute or so more to print and evaluate the test. Doesn't sound much but it all adds up when you're running 100-200 tests per week.

Two years down the line, when we got inspected by the Medicines Control Agency, they noted that the calibration standards we were using were not B.P. compliant either. It turned out the same director had changed the order (after we'd placed it) to ones which were about £30 cheaper.

The upshot? I had to dig out all the retained samples from the previous two years and run them again, having calibrated the machine with the correct calibration standards. It took me three months to do them all.

Apparently, using the wrong calibration standard may also have accounted for the fact that we needed to replace the IR lamp on the machine about twice as frequently as we should have done...at a cost of £500 a pop.

The reason why this director had been so keen to save money?

Shortly before buying the new machine, we'd had the lab refitted. This director didn't like the basic but perfectly serviceable black plastic handles supplied with the new cupboards so he'd ordered them changed to lovely shiny metal ones.