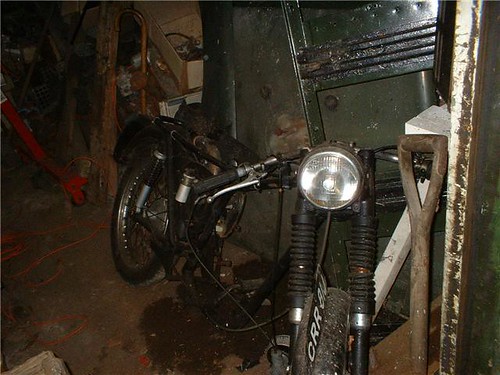 It's about half a 1970 BSA bantam. The only bits not in the picture are a knackerd chain and the logbook, the bodywork and engine having been stolen. Not a particularly inspiring bike, and not the best start for a first restoration-but I wanted a classic, and this was it.
There then followed 2 years of spannering, painting, fettling, buying bits, refettling, unspannering, buying more bits...pictures here: @N03/sets/72157614315853615/
"www.flickr.com/photos/[email protected]/sets/72157614315853615/

I decided to do it as a mini cafe racer, being as the engine is still quite popular for tuning and racing. This caused many headaches. Most of the modifications were done at least 3 times. The mudgaurd had to be redone when I realised the original held the forks stiff-after I tried replacing the bushes. The rearset footpegs were a huge headache too, it wasn't until I came to fit the chain I realised they were in the way. The seat took 3 months, made from some scrap steel, a camping roll mat, a tarts leather skirt and a load of fibreglass-man, the fumes! I carefully smoothed the ports in the engine, had the crank rebuilt and the engine bored to a whole 185cc (that and the tyres are the only bits I didn't do myself), rewired it...I shudder to think what it cost, if I try totting it up I give up after a grand.
I rebuilt the engine in January, and after fitting it into the frame it fired up pretty eagerly: www.flickr.com/photos/35741071@N03/4281076209/

By March I'd built this: 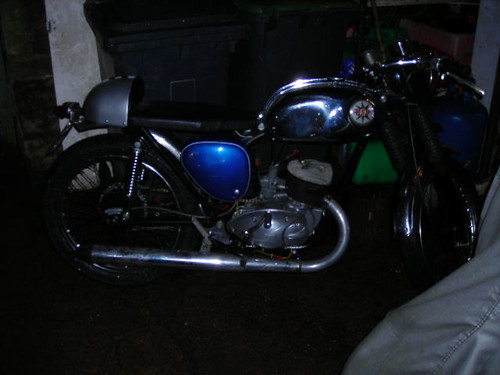 The second ride (once I'd found the knackered ignition coil) was incredible. The engine was incredibly wheezy and slow at first, but as it warmed up it woke up. Almost as though it was remembering what roads are for after 14 years sat in a shed. It is a great feeling to ride something you've built, nut and bolt upwards.

Since I posted this in Beautiful moments part 2, the bike has continued to evolve. Nice new halogen headlamp, and a couple of exhausts to make it less gobby, smoother and quicker. I've moved to Derby now, so straight throughs are a bit anti social. Sadly this year it's got a bit sidelined as I've been building a workshop, like a twit I insured it then havn't MOT'd it since June, so it's not ran for a bit. Just before laying it up I fitted a new mikuni carburettor, which made it much smoother. The tale will continue...
(Greenbat, Thu 11 Oct 2012, 13:22, 6 replies)

Is that a restoration, or 'building a new bike around a couple of bits of vaguely bike-shaped metal'?

Restoration
It's admittedly a mongrel of several different BSA Bantams, but it counts as the same bike they made in 1970. Most of the changes from standard are cosmetic to be honest.
(Greenbat, Thu 11 Oct 2012, 22:26, closed)

Out of curiosity, what did the initial ruin cost you? That's a fair project, to say the least.
(