"Here in my car", said 80s pop hero Gary Numan, "I feel safest of all". He obviously never shared the same stretch of road as me, then. Automotive tales of mirth and woe, please.

My first bike, the mighty CG125
I got my first motorbike a couple of years back. I had began an apprenticeship in Derby, and found that a 3-4 hour commute (depending if central trains could be arsed to run trains) by bicycle and train was as expensive as it was painful. Seriously, its no wonder no-one uses public transport. Anyway, due to my youthful age and being the possessor of a penis, a car was waaay out the question insurance wise. So Dad very kindly loaned me £700 for a fairly tidy example of hondas finest L plater. One CBT course later, another loan from Dad for the £400 insurance bill and I picked it up from the garage. Just like my CBT-lights on dip beam, shoulder check, indicate, pull away, clutch in and lift the gear lever up to go into second, clutch out...WEEEEEERRIINGbrr said the engine as it drove absolutely nothing. So, first problem-the gearbox is different to the one I did CBT on.
Got home to find the documents I'd tucked under my jacket had fallen out, so hopped on my bicycle to find them, lying in the leaves on the pavement. Phew! Right, lets go have a play.
And what a wonderful ride it was. The little bike pulled like a tractor, propelling us to insanly high speeds-35, 40, 45...ooh, think I'll slow down there! There is nothing to match the terrified enjoyment of a first bike.
Think I'll have a rest now. Ah, a layby.
Brakes, down the gears, pull in, pull the front brake on to stop, oh bollocks I'm on my side. Turns out the front wheel locks up on gravel if you apply that brake. No damage to me or bike, so I eventually carried on.
Later that evening, Mum was looking at it and remembering her bikes. Then she stopped remembering her bikes, and started wondering why the tax was dated June 2007. Ooops! So, back in the shed it went until I had £15 for Mr Darling et al.

The next few months formed winter, which is a great introduction to bikes. Every morning I shivered my way to work in the dark, and every evening I shivered my way home in the dark, due to my working hours. When I saw the sun at weekends I feared I may turn to dust. One of the joys of L plating is you don't think about plod with ray guns, meaning the little CG got nailed everywhere, once my nerve could match the phenomenal power (ha ha).

Then in February, I was happily trundling along a dead straight bit of road in broad daylight, headlamp on and a hi vis I borrowed off Dad making me look like Jordans fake tan. Noticed a car coming towards me, indicating to his right. Saw him stop to let me past. Got within about 10 feet of him, and saw him begin to pull across my path. Then I saw the road about 10 inches from my face. 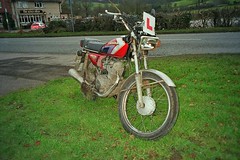 The bloke was very lucky to be old and frail, otherwise I'd have beaten him senseless. After the usual ambulance/plod etc, Dad trailered us home. I then had to pay £500 excess to get the bloody bike fixed, because I'd been foolish enough to get fully comp insurance. I'd only just paid Dad the previous loans too. Still, the scar on my elbow was worth £600, which went on my gorgeous Honda CB400/4 after I passed my test.
The 125 wasn't finished though. It emerged from the garage looking a bit scraped, but still had the familiar growl. I was over the moon, I had my bike back!
Not long after I passed my test, but kept the 125 whilst I saved up for a bigger bike. My girlfriend at the time wound up working in Bristol, after 6 weeks of which I began to miss her. The solution? Ride a severely battered 125 from Derbyshire, a good 350 mile round trip. Cost about £15 of petrol and the bike didn't miss a beat, despite being thrashed back.
The bike still refuses to die. I now use it as a winter hack, when salt and ice threaten to damage my lovely 400. I've doubled the mileage since I bought it, meaning it rattles and clatters like the tin man falling down the stairs. I got my Mum, Dad and little sister back on bikes with it too, which goes some way to excuse filling the yard with 3 more bikes...
(Greenbat, Sun 25 Apr 2010, 19:31, 4 replies)

You just have to love the old CG125
I swear that they are bomb proof, my one was bought from e-Bay for just under £300 and it was the best money I ever spent. I learned how to use the road, I dropped it and it was fine, I ran it everywhere and even did some long runs on it. My first ride was terrifying, my last on it was last week and to be honest, it can out run bigger bikes in the town centre because it is just so small and light. Also I get to burn off the chav kids on their manky scooters.

I have my 650 now, but to be honest, there is a gentle and simple pleasure in riding my 125, he may not be a super fast sports bike, but I know that he will always get me to where I need to be. I am thinking about stripping and rebuilding him, so that he will be all nice and shiny again too, but I kind of like his shitkicker look.

Bless the Honda CG125 and all who ride them.

Have a clicky too.
(

Its well worth keeping the 125
If you get used to the 650 too much, ride the CG for a week and it'll feel like a new un again!
A mate of mine built a cafe racer out of a CB125 (the one before the CG). It is tiny, loud and beautifully made. We had a run in February which he led, and promptly disappeared up windy back roads leaving two beemwers and my 400 far behind.
(Greenbat, Mon 26 Apr 2010, 10:02, closed)

fantastic quote
"There is nothing to match the terrified enjoyment of a first bike."

keep safe, rubber side down :)