I should have been arrested

Faced with The Law when I and a bunch of equally idiotic mates set off a load of loud explosions down the local chalk pit, we blamed bigger boys who had run off. Tell us of the times when you got away with something naughty and slightly out of order.

Thanks to MatJ for the suggestion

Did ever mention that I drove a land Rover all the way around Africa? Well technically that’s a lie – rather than get fleeced by the Egyptian vehicle import charges I figured out a route from Suakin on the Sudanese coast that would take me across to Riyadh in Saudi Arabia. Once the transit visa was sorted out it was just a matter of the solo drive from Khartoum along Kitchener’s railway line (literally for some stretches) to the coast. It was an amazing crossing – I managed to get to the coast in a hard day’s driving from Atbara, and then spent a few hours faffing over the tickets for the ferry.

By this time I’d been in Africa for a year and a half and was used to African ways. I was expecting some rusting hulk, so the ferry came as a bit of a surprise; a modern looking behemoth that still had posters up from its recent service in the Scottish isles. I drove into a cavernous hold that was pretty much empty, and then went topside to watch the coral-built ruins of Old Suakin slip into the sunset.

On arrival I suddenly found myself in the first world again. In case you haven’t figured it out they call the third world the third world because of the gaping chasm between it and the first world, so there I am waiting for uniformed officials to arrange the offloading of my Landy in a smart ferry terminal, when I start thinking about my bottle of whisky.

This bottle had travelled up with me from Kenya, a good single malt about two thirds gone, and I hadn’t really thought about it for a while because, for a ‘dry’ country, Sudan proved to include quite a few good watering holes along the way (the best was the splendidly hospitable British High Commission) so I hadn’t needed to fall back on reserves. Once in the desert I realised that I’d mislaid the bottle – it had probably slipped behind the dead fridge, but looking for it was going to raise huge clouds of dust, so I let it be.

Fast forward an hour and now I’m in a Saudi customs shed where they are going over my paperwork prior to checking out the vehicle. I still wasn’t too fussed – if they found it I decided I’d offer to pour it down the drain or gift it, claiming (as was the case) that I’d lost it ages ago, and showing the dust that covered everything in the car as evidence. A genuine mistake which I was sure the friendly officials in pristine starched white dishdashes would accept. In the event I needn’t have worried – the search was perfunctory, and the bottle remained lost until I decided to share it with a friendly Syrian border guard a few weeks later.

I recently told this story to a friend who had worked with the Saudi military, and he shook his head. “Fifty lashes and a year in prison minimum, idiot”. Fuck knows what I’d have got for the cruise missile engine I was smuggling home in my top box. 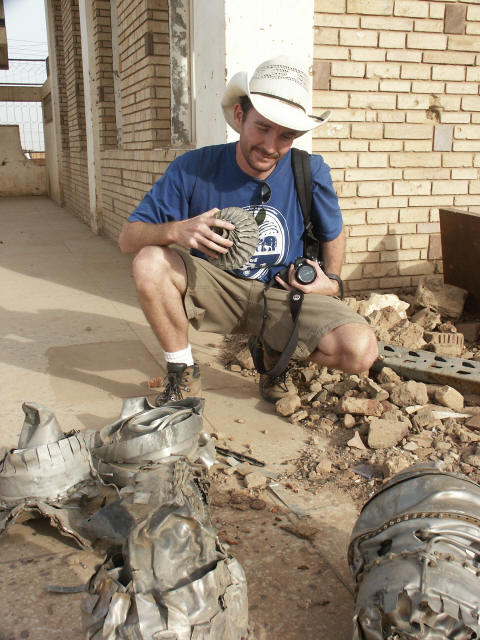 That? Erm, spare parts mate, that's a Landy transmission cooling fin you have in your hand I'm sure ;-)

Really? I'd assumed a nautilus fossil.
(

interestingly, 1st world used to mean the shermans and their mates, 2nd world was the pinkos (china/russia etc) and 3rd world was the non-aligned remainder.
(

I'm never entirely sure...
... what compels rich first worlders to "experience" my continent of origin in this fashion. Took me years of bloody effort and most of a year's wages to escape the bloody place.
(Ladyfingers is in your wardrobe,, Sat 28 Jan 2012, 5:07, closed)

I think it's because it's the last continent in the world where you can really escape from the modern world, and actually get yourself into real trouble. For me a large part of it was meeting people who have nothing but are far happier than your average First Worlder. And all most of them want is to have our live. So yes, it's ironic.
(strongp, Sat 28 Jan 2012, 11:42, closed)

I think the answer is more or less the same reason you left
If you have an easy way to get out, anywhere can be interesting.

I spent quite a lot of my 20's bimbling around Africa (and lots of other 'dodgy' places, e.g. Yemen), for work. There's a very big difference between flying in, being driven around, staying at safe and secure hotels, then flying out again when you want to, and having to live as a local.
(username failed moderation, Mon 30 Jan 2012, 9:50, closed)

yep, that would make you a tourist, or an expat. I think the 'interesting' bit starts once you get away from that. For me it was all about not being able to squawk for help if things go to shit. You make your decisions and live by them. Sure you are going to have an easy time of it if you're in a city with a credit card, but there aren't any easy exits in the middle off the jungle or the desert. The great thing about getting of the tourist routes is there aren't hotels - you eat on the street with the other young men, and actually see the real country not the tourist destinations. And yes, it can be dangerous at times, but those moments are outweighed by all the good people that you meet. I learned a lot about myself which surprised me as I've been around the block - if I'd been in some of the situations I found myself in on the trip when I was 20 I'd probably had fucked it up and killed myself.
(strongp, Mon 30 Jan 2012, 10:51, closed)

have been re-reading
long way down recently.

It sounds very appealing. Too late for me now though, my wife and kids would never stand for it!
(username failed moderation, Mon 30 Jan 2012, 11:21, closed)

You should ask the missus - if you're lucky she might be glad to get rid of you for a few months. I did some of the routes as they did, only without the support team. Having to do you own washing up is a bitch.
(strongp, Tue 31 Jan 2012, 16:24, closed)

Well played, sounds like quite the adventure :-)
And I'm curious as to your choice of scotch?
(

Glenfiddich - the only malt they had. But I did find a Bruichladdich in a small bottle shop in Middleberg, SA, of all places. The first one I ever saw outside of Scotland.
(strongp, Sat 28 Jan 2012, 11:44, closed)

Glenfiddich?
I thought you said it was a good malt?
(

I suppose the fact that I haven't bought a bottle of it since might attest to that, however when you're several hundred miles from the nearest bar I assure you it's a good malt.
(strongp, Tue 31 Jan 2012, 16:20, closed)

I really thought the Cruise Missile Engine reference was a gag / hyperbole.
Then I scrolled down. Nicely done anti-twist!
(moon monkey is busy making memories worth repressing, Mon 30 Jan 2012, 13:56, closed)