The B3ta Confessional is open. What was the naughtiest thing you ever did at school?

Soggy biscuits...
Not QUITE on topic but naughty and in school..
In ALL schools there is an invisible line between the 'teachers' and the 'support staff' with the former regarding the latter as thicko skivvies and the latter regarding the former as middle class over paid ungrateful wankers. As a teacher but being a hard drinking working class potty mouth I am mates mostly with the secretarial staff but have a foot in both camps. Teachers are like students (tea, coffee and milk guarded with postit notes that may as well have said "I have a tiny cock") but the teaching staff had a tradition that on your birthday you filled the 'birthday biscuits' tin up to celebrate. Sue (office staff) came in the staff room to pin up a notice and helped herself to a 'birthday biscuit' The next day some anal retentive had put up a notice "Birthday biscuits are for teaching staff. Office staff have their own tin. Thank you" This was pretty much agreed as fair and not petty at all. A few moments later i received a mysterious text "DO NOT EAT THE STAFF ROOM BISCUITS". Sue would not elaborate but I resisted. TWO YEARS later when pissed up she confessed to me that she had smuggled the biscuit tin out of the staff room, inserted each biscuit into her vagina and then replaced it.
(DubstepBetty Down wiv der kids since 1972, Fri 9 Sep 2011, 0:36, 7 replies) 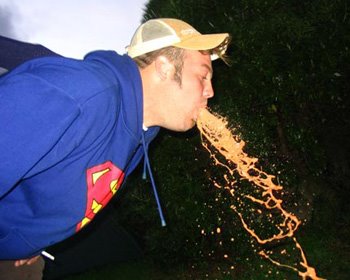 Thats
Got to be one crumby fanny. Jammy dodgers for the time of the month?
(andythepieman Is surfing the waves of indifference on, Fri 9 Sep 2011, 14:27, closed)

Wouldn't biscuits like pink wafers would disintegrate in a regulation british mimsy?
(

I hope to goodness they weren't
digestives.
(