Be suprised if someone hasn't done this already 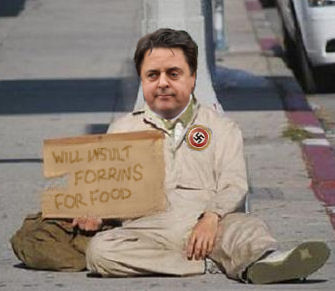 That'll put a dent in the fucker's efforts.
(

Unfortunately going Bankrupt is an easy way out for many people these days with no 'real' punishment. They don't just owe money to banks etc but to decent hard working people who they crap over and can walk way guilt free and not pay back the money they have robbed. Takes only a year or two to get their credit rate back up and they do the same.

Sorry for rant but have personal experience
(

I've done it by repaying every single penny and going without anything but the basics for four years.
(

I fucking applaud you, man.

I'm still clearing debts from 1988. I'm going the "stand on your own feet" route and for you to clear that amount in 4 years is awesome.
I have been royally shafted with fines, charges and multiple accounts - I was totally in agreement with Rab C Nesbitt's "Rab in Hoodie" ethics last night (http://www.bbc.co.uk/iplayer/episode/b03ndb1g/Rab_C_Nesbitt_Rab_in_Hoodie/).
(

I've been fortunate though

I've had a full time job and no kids to support so I've had some money left over at the end of the month to throw at the debt. Used a debt management charity to help negotiate with creditors too. It's been scary at times - have been dragged round the court system, had charging orders put on my house, survived on basic food and have had to beg for help when things went wrong (fridge packed up, car repairs etc) but it's a life lesson learned and I certainly won't be going there again.

The hardest part is the fact that I have little to show for it - I never got into debt buying flash gadgets or going on holidays like some - our debt was racked up by bank charges (£35 for a £2 unauthorised overdraft), household maintenance and supporting the wife through illness.
(

Fair play to you chief.

Plenty of them about.
(