We here at B3ta love it when a plan comes together. Tell us about incredible projects and stuff you've built by your own hand. Go on, gloat away.

Thanks to A Vagabond for the suggestion

Hardly a project but unfolding as we speak
My 18 year old brother and a few friends are currently on a coach on their way to Amsterdam. All of them are quite big fans of the 'erb. They're on the coach with about 30 other lads (I'm assuming some student arranged thing)

I've just mocked this up in paint, took a photo of my laptop screen and sent it to all them. They're fucking fuming to say the least, my brother text me and I've explained it's because of the "Euro zone crisis". 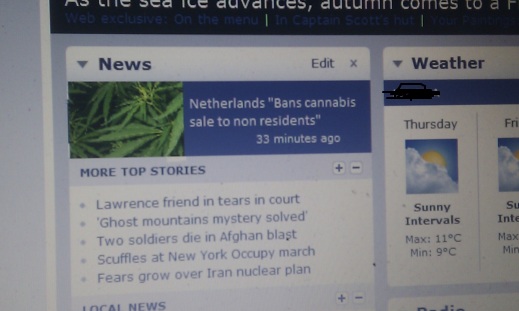 They'll find out the truth in a minute but it's all good fun for me.

(I know it's awfully done but as you can imagine, on a small phone screen it looks legit)

Someone finished Ghost Mountains?
I always found that Ian Livingstone's most challenging book.
(

This made me smile.

I bet he's worried with that Iranian nuclear crisis and all.

I don't know why I felt the need to edit out my postcode, I put the post up and suddenly panic set in. I'm normal, honest.
(nobface part time paperboy full time gangsta, Thu 17 Nov 2011, 22:14, closed)

According to our Tour Guide in Amsterdam last weekend, this is actulally happening. Passed by Parliament it comes into effect on the 1st Jan 2012, although local Mayors can delay the introduction for 3 years.
(jono_h, Fri 18 Nov 2011, 7:50, closed)