My favourite was a public loo in Oxford where someone had written a huge poem all down the cubicle door. Best bit? Someone else had added detailed literary criticism. Only in Oxford. Have you seen better? Worse? Do tell. 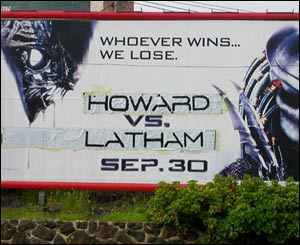 (This was for the Australian Federal election a couple of years ago. I'd like to thank the producers of Alien Vs. Predator for releasing their film at such an opportune time.)
(Emily Bruce-Dickinson http://jovialfellow.blogspot.com/, Sun 6 May 2007, 6:42, Reply)