Home » Question of the Week » Best Graffiti Ever » Page 46 | Search

My favourite was a public loo in Oxford where someone had written a huge poem all down the cubicle door. Best bit? Someone else had added detailed literary criticism. Only in Oxford. Have you seen better? Worse? Do tell.

Just Wanted To Say Thanks For The Support People, My Trial Is Next Thursday
Signed, Bill Posters.
(billybobbean is still trying to make it QOTW's best of the week, Thu 10 May 2007, 3:30, Reply)

Bruins, Fallowfield, Manchester
Back in the golden days when this pub was dark, dingy, cheap, and had up to 8 real ales on tap, there was also the toilet grafitti competition. the winners were:

By, I assume, Wadey and Blano, respectively. I don't know who they are but their work was cruelly painted over in about 2004 when the pub was turned into one of those rubbish trendy bars. I have taken it upon myself to replicate their words in every bar toilet i have been in since.
(dazsnow the "ever amazing" - cowjam said so once, Thu 10 May 2007, 3:29, Reply)

Humburger Joint
I just went to a humburger joint/bar that lets customers graffiti the walls/tables/cups/etc. There was some random stuff in there:
"Zombies should die" (aren't they already dead?)
"Marty smells of poo"
"I puked here"
"The $1 burgers are burned to a crisp" (they were)
mustache and goatee on photo of guy in red suit
(evil_penguin_17 Robots of Doom... Attack!, Thu 10 May 2007, 3:10, Reply)

close by
from my window i can see the phrase "R.G.C 4 Lizife" sprayed on the opposite house. it's been there since i moved in last year, and i'm certain that the kid who lives there is responsible. idiot.

also, behind our bathroom door, at a party, somebody scrawled "WIGAN BEEF" into the plaster. cheers you bastard mudhutter. at least you won't be enjoying my nice premiership house again. only championship parties from saturday onwards.
(ginger_gripper, Thu 10 May 2007, 2:43, Reply)

Dundee
Currently in Hyde Park, Leeds. Going to check out that spiffy Queen Mum one at Jacksons.

However, Scumdee is home to many a hilarious graffiti artist. More explanation and pics when i get home.
(Schumann makes awesome quiches., Thu 10 May 2007, 2:39, Reply)

Liverpool Pies
Probably a repost going off the "pies" post below but it reminded me that for years on the M57 towards switch island there was "THE PIES THE PIES" written on a bridge.

I never found it funny as it was just always there when I went past. Then my mates saw it on a visit to my home one weekend and we nearly had to stop the car they were laughing so hard.
(mercemployee, Thu 10 May 2007, 1:29, Reply)

And yet more Merseyside railway stories...
Seeing that railway bridge reminded me that for some inexplicable reason the railway bridge in Bromborough was covered with Wu-Tang Clan graffiti. And if you know Bromborough (or the Wirral for that matter) you'd know that it's hardly the place you'd expect to find many rap fans. If I was back home I'd try and get a picture - although I'd probably be chased off by scallies at this time of year.

Also, El Barto, the infamous Springfield graffiti artist visited The Wirral once and left so many tags that he made the front page of The Wirral Globe...yep, graffiti was big news back home.
(myfamousgrandad, Thu 10 May 2007, 0:42, Reply)

On bridge
into Reading on A4

Regicide by Cannibalism
Not really graffiti, but this always makes me laugh.

On a closed-down pub in Bath, someone has changed a sign to read: 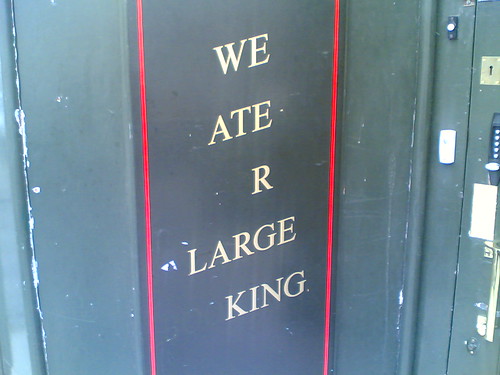 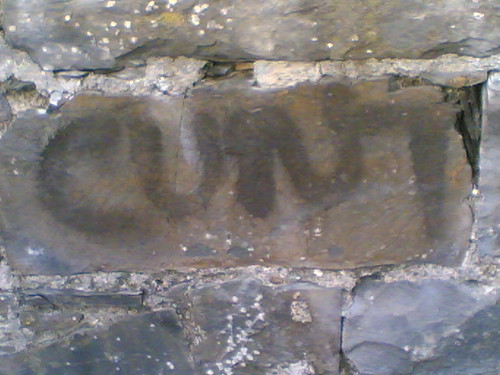 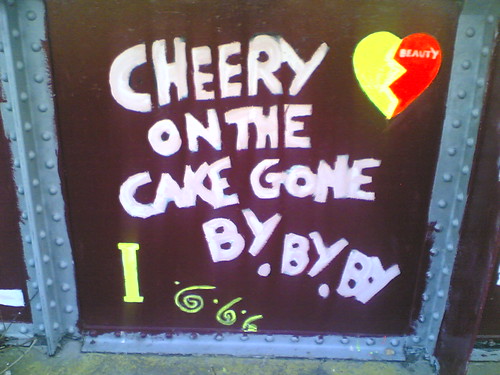 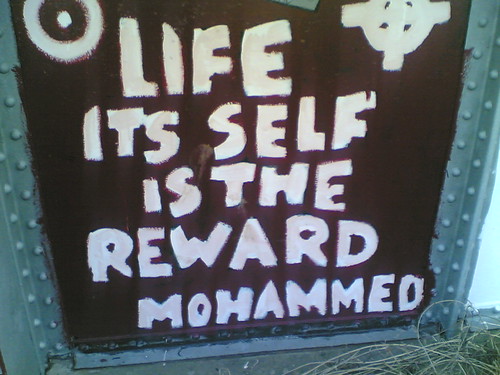 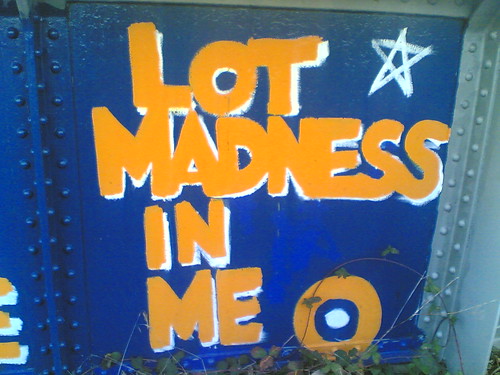 This is just a tiny sample. There's loads - someone's obviously been busy.

Probably the most unneeded graffiti ever, I thought it was already kinda obvious from the name...
(

on the dog
it's not big and not clever but i used to draw swastikas and "i love satan" on my parents irish setter's belly, so that when they had people over for dinner or whatever, the dog would do it's usual thing of going into the living room and rolling onto it's back... not really graffiti i suppose but it was funny at the time.
(Alaning, Wed 9 May 2007, 22:53, Reply)

Mudwig Revisited
Snapped this the other day in Bristol: 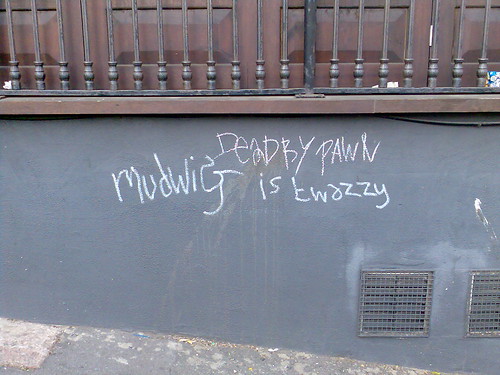 It's at the top of Jacob's Wells Road on the wall of La Tosspot or whatever it's called.

beware !!
On the door of a cludgie at my old college:

I will get round to actually doing this one day
A road near me is called Woodway.

This pic hasn't had an outing in a good two years or so, crumbs.
(

My personal favourites...
Adorning the front door of my old flat in Shoreditch (ok Dalston)... "Kurds RULE!" (in black ink.) Joined a days later with "No they dont! ...the Turks" (in red paint). We stayed out of the argument.

Another beauty is on the side of a abandoned school / hospital / mental lockup in Richmond (of all places). "E = MC SHIT" In 4ft high white lettering. Presumably from a disgruntled local physicist.
(poikes Bored sig, Wed 9 May 2007, 22:03, Reply)

just before an exam, I see that on the door ...
some kind soul has inscribed the full lyrics to the song "Nemesis", by Shriekback. I can still recall them perfectly, some 20 years later.

I know I've seen many, but the best I can recall...
... appeared recently on the estate near me (the Old Dean, to any who know it). I forget which 'crew' it pertains to - they all seem to stick to a naming system of the letters OD, then a letter of their choice - for example, M for 'massive'. This is the only actual one I can remember so I'll go with that.

The piece of graffitti in question is written on the shutters of one of the premises in the shopping arcade, and reads "ODM 4 Live". Yes, yes, very amusing, the usual illiterate chavs, but the supreme irony of it is that the shutter in question is on the new Learndirect centre for the area.


There used to be a bit that tickled me on a bridge by the side of the road on my way to Andover (it would probably help if I could remember which road this is) which said something like "Vivisection is animal murder". If I had a picture or knew enough details to google for one you'd see how funny this was, due to the size, improbable placement, and vaguely intelligent message compared to most of the banal, expletive-ridden scrawls you see around here.
(

Around the summit of some hill or other just outside Atlanta...
the one all the tourists climb/walk up. For over a century or so, people have been adding graffiti, mostly just name and date. The oldest exhibits are cut letter perfect, as if carved by a master stonemason. The most recent are as if scratched by stoned, illiterate morons. Go progress, go!
(haberman is singing in the changes, Wed 9 May 2007, 21:34, Reply)

on the bog doors in the pub i work at
there's a little message scribed just about sitting head height that says;

"All the scots are queers!"

To which someone has written underneath;

"It's the Welsh not the scots that are wankers!"

To which someone was replied;

"You know what, you're both right"

always gives me a smile when I'm crimping out beer poos.
(

Another one...
Saw this on the bus yesterday: "Rachel loves to suck cock".

Not so witty by itself but I laughed at what was written underneath: "If you're talking about Rachel Brewer then practice has made perfect"
(winestain, Wed 9 May 2007, 21:25, Reply)

In a snicket near my house..
There's an 'above view' picture of a guy trying to suck his own cock. It's been there for roughly 15 years now. Might have to update this post with a picture in due course!
(

StEvenage - armpit of Hertfordshire
Couple of years ago: Welcome to Stevenage, Twinned with (rather appropriately) Hell. Made my journey home from work almost bearable for a few days.
Also, village just outside Stevenage, Knebworth, you do the math!
(DangerFlange Chamone Mother Hubbard, Wed 9 May 2007, 20:28, Reply)

And from Hulme, sometime later:

Uckfield is a not very good town
If anyine lives in Uckfield, East Sussex:
a) have my condolences - it's rubbish & glad I left the area
b) you know they had to cut the sign right back so no-one else could add a letter to the sign for the River Uck?

Graffiti
I work in a school and we get the usual stuff "so and so is gay" or "Mr Blah blah rubs his cock in class" so we tend to ignore it all.

However a recent trip to the Staff ladies toilet had me wetting myself! Some wag had left a sticker on the door that had a picture of a toilet with eyes and the wording "I am an alien visitor and you have greatly offended me!"

Laugh I nearly pissed myself. er...
(

In the toilets in Spiders nightclub, Hull

Cornwall
I love Cornwall, especially its sheer desire to independant from the rest of us and I always smile when I see a cornish flag on someones car.
Anyway, imagine my amusement when visiting some field in said county, only to discover to my tremendous delight, that some whippersnap had taken the time to draw a Cornish flag in a cow pat. The funny thing is, I am almost certain it was done out of local pride rather than spite.
(jamezp1, Wed 9 May 2007, 18:55, Reply)