Love it or hate it, it'll eat you for breakfast 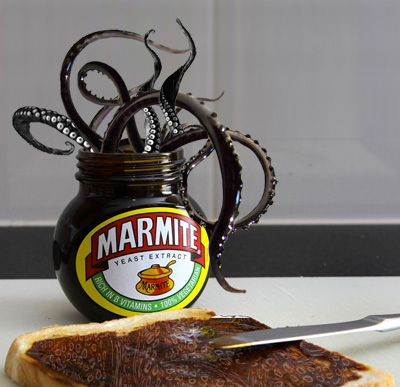 From the Hidden Horrors challenge. See all 60 entries (closed)

i fucking love this!

also, i was in a silly mood last night and i was eating squid, which resulted in me opening the door to my neighbour with a startled look on my face and tentacles poking out of my mouth! :D
(

i do love squid

£4 for a nice big bag of prepared and frozen squid from tesco, which means hot and spicy thai squid noodle soup for tea for 4 days!
(

baby octopus for me

shallow fried or barbecued. Not that they're actually babies, they're just a tiny wee species
(

i used to buy them by the jar

i don't mind them shallow fried, but i'm not a fan of barbecueing them, not into that smoky taste. that's why i do a lot of thai stuff, it's nice and hot, but the taste is a lot cleaner
(

Yeah, keep telling yourself that.

if it tastes nice, eat the fucker
(

give it the knife

he can see in 3squiddlydiddly The Yeast in The Cave.
(